Crop budgets for 2015 were originally released in July 2014. The 2015 Crop Budgets have been revised and are now available in the management section of farmdoc (see here). The major change has been a reduction in commodity prices. The June version had per bushel prices of $4.20 for corn, $10.50 for soybeans, and $5.50 for wheat. The September version of the budgets have prices of $3.80 for corn (a $.40 per bushel reduction from July budgets), $9.75 of soybeans (a $.75 per bushel reduction), and $5.00 for wheat (a $.50 reduction). These new prices result in very low returns, and indicate the need to conserve cash.

Table 1 shows revised budgets for corn and soybeans grown in central Illinois. Budgets for other regions are available on farmdoc (see here). Corn and soybeans yields are at expected levels, which are much lower than projected 2014 yields. The corn-after-soybeans yield is 199 bushels per acre and the soybean-after-corn yield is at 57 bushels per acre. 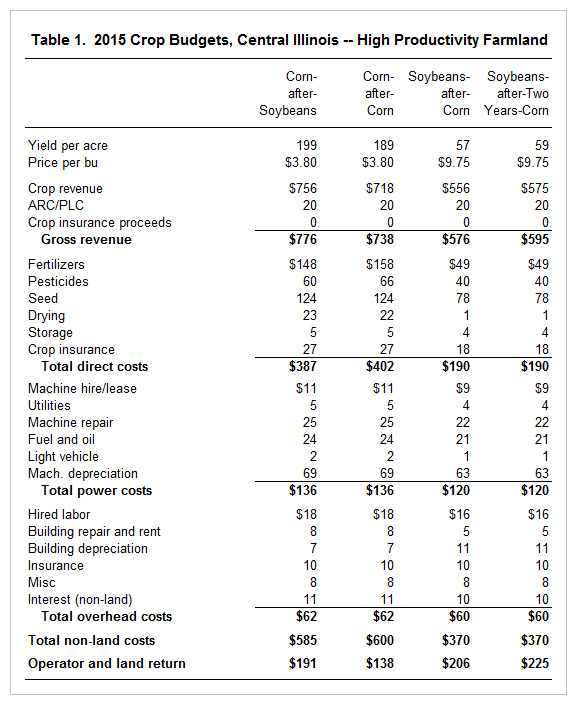 Operator and land returns are projected at:

Operator and land returns are at very low levels, with corn returns being $300 per acre lower than average levels from 2009 through 2013 (see here). Average cash rents are near $300 per acre. Cash rents at these levels would result in significant losses to farmers in 2015 if returns are at levels shown in Table 1.

Even 50-50 share rent arrangements would result in losses to farmers. A 50-50 arrangement has the land owner and farmer share equally in revenue and direct costs, with the farmer incurring all the power and overhead costs. Many of these arrangements have farmers pay an additional rent to the land owner. The current rate is around $25 per acre. At the price, yield, and cost levels shown in Table 1, a farmer would have a -$20 return under a 50-50 share rent arrangement.

These low returns suggest the need for farmers to conserve cash by:

Budgets shown in Table 1 suggest that soybeans will be more profitable than corn. Soybeans-after-corn is projected at a $206 return compared to $138 for corn-after-corn (see Table 1). Corn typically is more profitable than soybeans in central Illinois. In lower productivity areas, soybeans likely will have more of a relative return advantage than is projected for central Illinois.

Current prices favor soybean planting over corn planting by a relatively large margin. Unless relative corn and soybean prices adjust, there could be large shift to more soybeans planting in 2015. Over the next several months, relative prices on futures exchanges likely will adjust as planting intentions become clearer.

Current futures prices are suggesting low returns for 2015. Given these low returns, farmers will need to adopt practices that conserve cash. Current price levels suggest that soybeans will be more profitable than corn.

Of course, returns projections could change. For example, it is highly likely that prices will differ from projections shown here. Supply and demand factors could change resulting in higher prices. Obviously, prices could be lower. Another large harvest in 2015 could result in lower prices than those shown in 2015 budgets.

In perspective, the low prices projected for 2014 and 2015 may be below the long-run average, just as the prices from 2010 through 2013 were above the long-run average. Swings in prices have occurred in the past, and are likely to occur in the future. These swings also cause swings in profitability. The long-run profitability of agriculture likely has not changed. Now a period of low returns likely is occurring, just as above average returns occurred from 2010 through 2013.