The magnitude of the decline in crude oil and gasoline prices has taken nearly everyone by surprise. NYMEX nearby crude oil futures this week touched $60 per barrel, almost $50 less than peak prices last summer. This is a major economic event with potentially far-reaching impacts for biofuels markets. We examined some of these impacts in two recent farmdoc daily articles (November 12, 2014; December 4, 2014). Our conclusion was that current high ethanol prices relative to gasoline prices, as illustrated in Figure 1, might slow the growth in domestic ethanol consumption, but would not likely result in consumption that is less than the 10 percent blend wall. In contrast, the high price ratio may represent a threat to growth in ethanol exports and could result in some decline in ethanol export volumes from current relatively high levels. Softness in export demand, in turn, would be expected to pressure ethanol prices and bring the ethanol/gasoline price ratio back to more normal levels. In today’s article, we investigate how much ethanol prices could decline from the combination of weaker export demand and continued low gasoline prices and the impact that lower prices would have on the profitability of ethanol production. 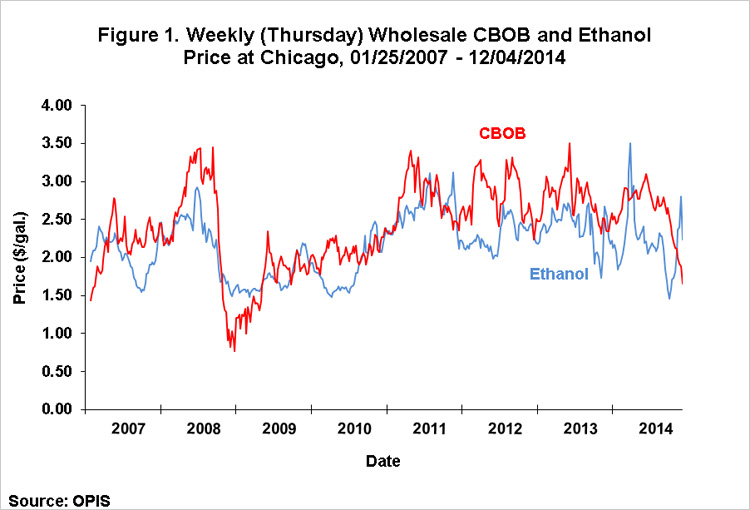 The magnitude of the potential decline in ethanol prices under the scenario of weakening export demand depends on the level of crude oil and gasoline prices and the expected equilibrium ratio of ethanol and gasoline prices. There is considerable uncertainty about both of those factors, so a range of outcomes is considered here. The base scenario assumes a crude oil price of $60 per barrel, which is close to the current price. In addition, a higher price scenario of $70 per barrel and a lower price scenario of $55 per barrel is considered. The ratio of wholesale CBOB prices per gallon at Chicago averaged about 2.7 percent of nearby NYMEX crude oil prices per barrel since 2007. Assuming that ratio is experienced going forward, the low price, base price, and high price scenario for crude oil imply Chicago wholesale CBOB prices of $1.49, $1.62, and $1.89 per gallon, respectively.

As indicated in Figure 2, the ratio of wholesale ethanol and wholesale CBOB prices has varied considerably over time. The average ratio since early 2012 has been 0.84. That ratio is assumed in the base scenario. Using the distribution of that ratio from 2012 forward, a higher price ratio of 0.90 and a lower ratio of 0.75 are also considered. Note that all three of the assumed ratios are considerably lower than the ratio in recent weeks. This reflects our view that the combination of softness in export demand and low gasoline prices will pressure ethanol prices and bring the ethanol/gasoline price ratio back to more normal levels. The implications for wholesale ethanol prices of the three alternative scenarios of CBOB prices and the three scenarios of ethanol/CBOB price ratios are shown in Panel A of Table 1. The calculated price of Chicago wholesale ethanol ranges from $1.12 per gallon to $1.70 per gallon, all well below the current spot price of about $2.05 per gallon. 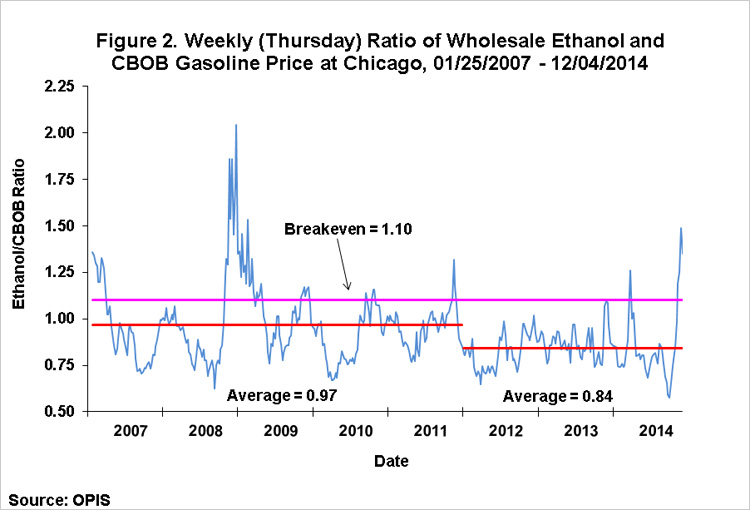 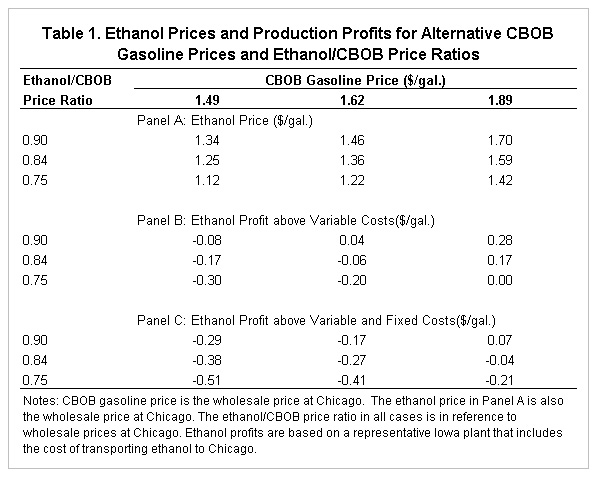 The scenarios presented in Table 1 are certainly daunting for the ethanol industry. The reasons the results are so negative are two-fold. First, we assume that ethanol prices will return to a more typical ratio to CBOB wholesale ethanol prices. Combined with the large decline in CBOB prices, this implies very low ethanol prices compared to what has typically prevailed the last two years. Second, we assume the price of corn is fixed at $3.65 per bushel, near current levels. The bottom-line is that ethanol production struggles to be profitable at a $3.65 corn price with ethanol valued at “normal” levels relative to the now much lower gasoline prices.

It is also important to recognize that it is highly unlikely that ethanol prices would actually decline to levels that would not be sufficient to cover at least variable costs of production. Domestic blending requirements under the RFS imply that large quantities of ethanol will continue to be required so that ethanol prices will have to remain sufficiently high to keep most plants in operation. As we stated in our article last week (farmdoc daily, December 4, 2014), there are growing indications that EPA rulemaking for 2014 and beyond will be near if not at the RFS statutory levels. Those indications include public comments from ethanol and petroleum industry participants as well as the recent uptick in RINs prices.

Further perspective is provided by Figure 3, which shows estimated weekly ethanol production profitability at the representative Iowa plant from January 26, 2007 through December 5, 2014. While profits above variable and fixed costs have varied substantially, there are two distinct periods with respect to average profits. Returns above estimated variable and fixed costs of production averaged only $0.05 per gallon over 2007-2012. Estimated profits for 2013-2014 averaged $0.35 per gallon, seven times the average over 2007-2012. The extended period of above average profits the last two years reflects an environment of declining corn prices, generally high crude oil prices that increased in the spring of 2014, and a period of generally large ethanol exports. That environment has changed significantly. Corn prices have recovered from the October lows and are not expected to decline in the near future and crude oil prices have declined sharply and may not increase in the near future. Now, a weakening of ethanol export demand could put additional pressure on ethanol prices and production profitability. One cannot be too confident in forecasting the precise magnitude, timing, and duration of lower profits, but it we will not be surprised if the current period of well-above average profits quickly comes to a close. 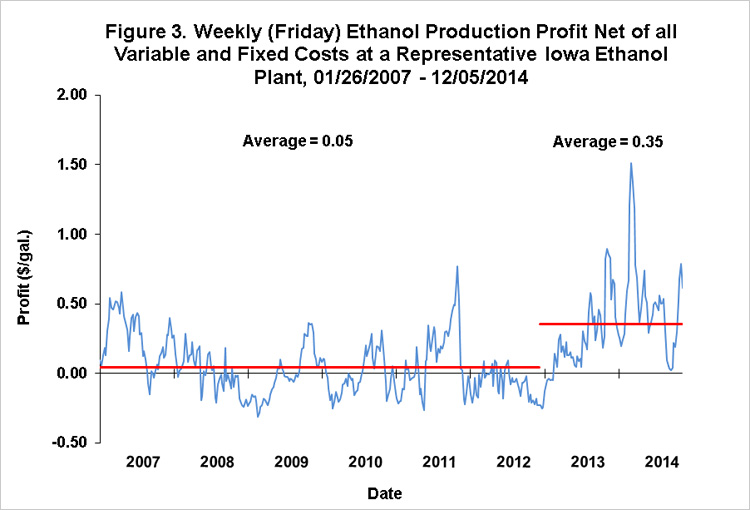 The drop in crude oil and gasoline prices is a major economic event and the ethanol industry will be directly impacted. We expect the combination of softness in export demand and low gasoline prices to pressure ethanol prices and bring the ethanol/gasoline price ratio back to more normal levels. In the scenarios we consider, the calculated price of Chicago wholesale ethanol ranges from $1.12 per gallon to $1.70 per gallon, all well below the current spot price of about $2.05 per gallon. At the current price of corn ($3.65 per bushel), these ethanol prices imply returns below estimated variable and fixed costs of production except for the highest crude oil price and the highest ratio of ethanol to gasoline prices considered. Consequently, we expect the curtain to come down on the current period of exceptional ethanol production profits fairly quickly.