In a recent farmdoc daily article (November 12, 2014) we initiated a discussion of whether the decline in gasoline prices had been large enough to threaten the competiveness of ethanol in gasoline blends. We concluded that: “Recent market history also suggests the ethanol/CBOB price ratio is not likely to move above 1.0 for any length of time and that market adjustments to maintain the competitive position of ethanol are likely to be rapid. Higher ethanol production and lower ethanol prices have proven quite effective in the past at maintaining ethanol’s place in gasoline blends and are likely to continue to do so in the future.” Here, we take up the topic again because crude oil and wholesale gasoline prices continued to decline through November, with crude oil prices (WTI) reaching the lowest levels in over 5 years, while ethanol prices continued to move higher. The increasing ratio of ethanol and CBOB prices has added to the uncertainty about the future of ethanol demand and perhaps contributed to the recent weakness in corn prices.

As indicated in Figure 1, the weekly wholesale price of ethanol at Chicago moved above the wholesale CBOB price on November 13 and continued to move higher through November 27. Historically, it has been relatively rare for ethanol prices to exceed CBOB prices in the wholesale market at Chicago and those occurrences were generally short-lived. The most protracted period was in late 2008 and early 2009 as crude oil prices declined sharply under recessionary pressures. We have argued that the breakeven price of blending ethanol (10 percent) in the motor fuel supply is 1.0 or 1.1 times the price of CBOB. (farmdoc daily, November 12, 2014). As indicated in Figure 2, that price ratio has exceeded 1.1 only rarely and for short periods of time since 2008-09. That ratio, however, moved above 1.1 in November and was at the highest level since early 2009. It is that price spike and the potential for the ethanol price premium to continue for a more extended period that has generated concerns about ethanol and therefore corn demand. 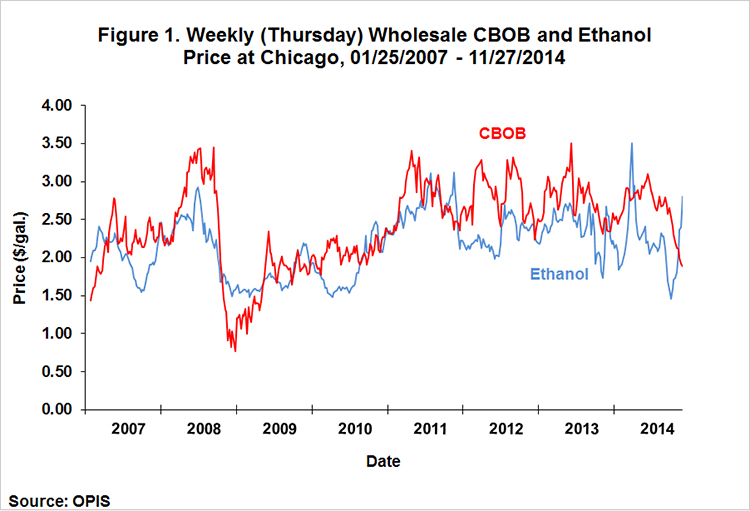 There are a number of factors to consider in assessing the potential impact of the higher ratio of ethanol and CBOB prices on demand for U.S. ethanol. Chief among these is the fact that current legislation, as implemented by the EPA, requires some minimum level of blending of renewable biofuels into the domestic fuel supply. There is considerable uncertainty about the magnitude of those requirements for 2014, 2015, and beyond since EPA recently postponed the announcement of the final rulemaking for both 2014 and 2015. The statutory requirement for the renewable (ethanol) mandate is 14.4 billion gallons for 2014 and 15 billion gallons annually from 2015 through 2022. EPA’s preliminary rulemaking for 2014 required blending of only 13 billion gallons, but there are growing indications, in our opinion, that the final rulemaking may be near if not at the statutory levels. Those indications include public comments from ethanol and petroleum industry participants as well as the recent uptick in RINs prices.

If we are right that EPA rulemaking for 2014 and beyond will be at statutory levels, then the question of exactly how the mandates will be achieved becomes very important. The mandate can be met by some combination of physical blending of ethanol and the retirement of the associated RINs, retirement of some of the existing stock of RINs (estimated at 1.9 billion gallons, farmodoc daily, August 6, 2014), and physical blending of biomass-based biodiesel. We judge that holders of “excess” RINs stocks will not likely retire large quantities in the near term to satisfy the renewable mandate since the magnitude of the current and future mandates are not known and there is considerable risk that those mandates will exceed the size of the 10 percent blend wall. Under that scenario, there could be a shortage of RINs in the not too distant future in order to meet the full statutory level of the mandates. If our judgment is correct, expected levels of required renewable fuels blending will be met for the time being with a combination of physical blending of ethanol and biomass-based biodiesel.

The mix of those two biofuels in meeting the renewable mandate might depend, in part, on the relative economics of blending the two fuels. The economics of biodiesel blending will be heavily influenced by the status of tax credits. It now appears increasingly likely that the $1.00 per gallon biodiesel tax credit will soon be retroactively reinstated for 2014, raising the likelihood that it will eventually be extended to 2015 as well. As indicated in Figure 3, the current blending margin for biodiesel with a $1.00 per gallon tax credit (biodiesel price – ULSD price + tax credit) has been positive for much of 2014 and remains historically high. A positive blending margin means that diesel blenders actually have earned a profit in 2014 generating D4 RINs after taking into account a retroactively reinstated tax credit. Consequently, biodiesel represents a profitable means of meeting some portion of the renewable mandate.

Despite the favorable economics of biodiesel blending at the present time, the investment that the petroleum industry has made in formulating gasoline to be blended with ethanol at the 10 percent level means it is most likely that ethanol would be used to meet the renewable biofuels mandate at least to the extent of the 10 percent blend wall. That blend wall is likely close to 13.5 billion gallons and this effectively represents the minimum for domestic ethanol consumption because of our expectation that the RFS renewable mandates are going to be moved back up to statutory levels. So, we see little risk to corn use for domestic ethanol consumptionto move below the level implied by the blend wall, which is about 4.9 billion bushels.

A different question is whether a high level of ethanol prices relative to CBOB prices will sacrifice potential growth in domestic ethanol consumption. The answer to this question turns on your view of the feasibility of expanding use of higher ethanol blends– E15 and E85–if ethanol is cheap relative to CBOB. We have noted the liability, infrastructure, and distribution constraints to expanding the use of higher ethanol blends in several previous farmdoc daily articles (e.g., May 24, 2012; June 19, 2013; December 4, 2013). Our position has not changed, which means that there is very limited scope for expanding ethanol use through higher blends, at least through 2015. The bottom line is that domestic ethanol consumption is likely stuck around 13.5 billion gallons regardless of the price of ethanol relative to CBOB.

A final issue associated with a high ratio of ethanol to gasoline prices is the potential impact on U.S. ethanol exports. U.S. ethanol exports peaked at 1.2 billion gallons in 2011 when Brazilian ethanol production was limited. Exports totaled 732 million gallons in 2012, 618 million gallons in 2013, and are on track to reach 750 to 800 million gallons this year. Earlier this year, low prices of ethanol relative to gasoline prices created an opportunity for ethanol consumption to expand in other parts of the world and pointed to the potential for even larger U.S. exports. A continuation of current price ratios, however, would not favor ethanol and could result in some decline in exports rather than further growth. However, it is unlikely that exports to Canada, which accounted for 45 percent of U.S exports during the first nine months of 2014, would be adversely affected since ethanol consumption is also mandated there. Demand for ethanol in other countries, however, might be negatively impacted by an extended period of high ethanol to gasoline price ratios, putting a few hundred million gallons of U.S ethanol exports at risk. This likely would only represent a drop in corn use for ethanol of about 150 million bushels.

Declining gasoline and increasing ethanol prices have created concerns that ethanol and corn demand could be adversely affected. Our analysis suggests this risk is over-stated. Key to our analysis is the assumption that RFS mandates are likely to return to statutory volumes for 2014 and beyond. So, even with an extended period of high ethanol to gasoline prices, domestic ethanol consumption would be supported at the 10 percent blend wall. We also argue that the blend wall represents a cap on domestic consumption for now–regardless of the level of ethanol and gasoline prices– because of the constraints on the expansion of the use of higher ethanol blends. The one threat is a retreat in ethanol exports, but that likely is no more than a few hundred million gallons in magnitude. Overall, we see little risk of total ethanol use falling below 13.9 billion gallons, and consequently, corn use for ethanol of less than 5 billion bushels. In addition, market history suggests the ethanol/CBOB price ratio is not likely to move above 1.0 for a long period of time and that market adjustments to maintain the competitive position of ethanol are likely to be rapid. This adjustment process has already started with fairly sharp declines in ethanol prices in recent days.

Irwin, S., and D. Good. "Is the Long Ethanol Boom Coming to a Close?" farmdoc daily (2):99, Department of Agricultural and Consumer Economics, University of Illinois at Urbana-Champaign, May 24, 2012.