Today’s analysis utilizes the same model of a representative Iowa ethanol plant that has been used the last several years to track the profitability of ethanol production (see earlier posts here, here, and here).  The model is meant to be representative of an “average” ethanol plant constructed since 2006.  There is certainly substantial variation in capacity and production efficiency across the industry and this should be kept in mind when viewing profit estimates from the model.  Some of the model assumptions include:

Model assumption have been updated for 2012 and 2013 based on an ethanol plant benchmarking studies by Christianson  and Associates.  We appreciate this firm sharing the results of their studies with us.

To track plant profitability over time, weekly ethanol and DDGS prices at Iowa ethanol plants are collected starting in late January 2007.  Crude corn oil prices for the Midwest are available from OPIS.  Natural gas costs are estimated based on monthly data from the EIA as available and updated using natural gas futures prices.   Figure 1 presents the (pre-tax) estimates of ethanol production profits per bushel of corn processed.  Profits are net of all variable and fixed costs and averaged $0.23 per bushel for the entire period.  There have been basically four sub-periods in terms of net profits:  i) high profits from 2007 through mid-2008, ii) breakeven from mid-2008 through the end of 2011, iii) losses for 2012 through early 2013, and iv) high profits again from spring 2013 through the present.   The most recent period is the longest run of uninterrupted profits since the series began in early 2007.   During this one-year run, profits averaged $0.93 per bushel of corn processed and reached a new high of $2.55 per bushel in early December 2013.  The picture presented here is certainly not one of an industry that has suffered because of recent policy proposals. 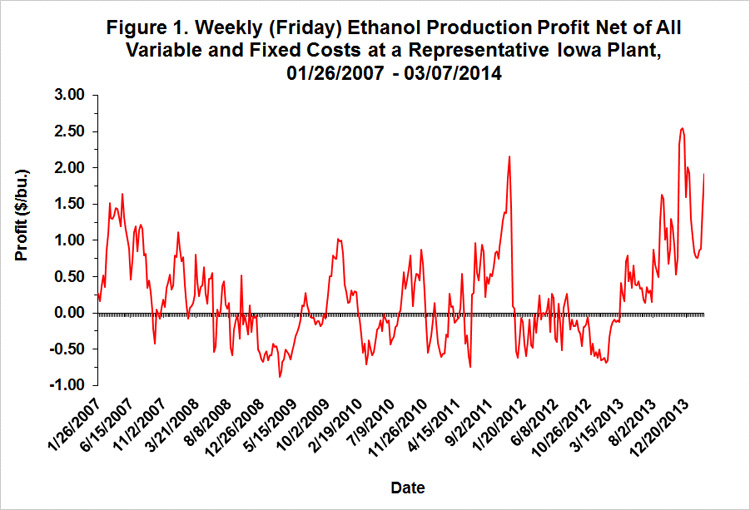 A natural question is what is behind the historically high profits of ethanol producers during the last year?  Figure 2 provides the answer by plotting the three main determinants of ethanol profitability: i) ethanol prices, ii) dried distillers grains solubles (DDGS) prices, and iii) corn prices.  The prices for each series are presented as a percentage of the value on March 15, 2013 in order to directly compare the price movements.  The figure reveals that all three prices declined during the last year, but corn prices declined much more than ethanol and DDGS prices.  For example, on the last date for each series, March 7, 2014, the prices for ethanol, DDGS, and corn were 88, 85, and 62 percent, respectively, of their levels on March 15, 2013.  Since ethanol and DDGS are outputs and corn is an input, this is a prescription for strong ethanol processing margins. 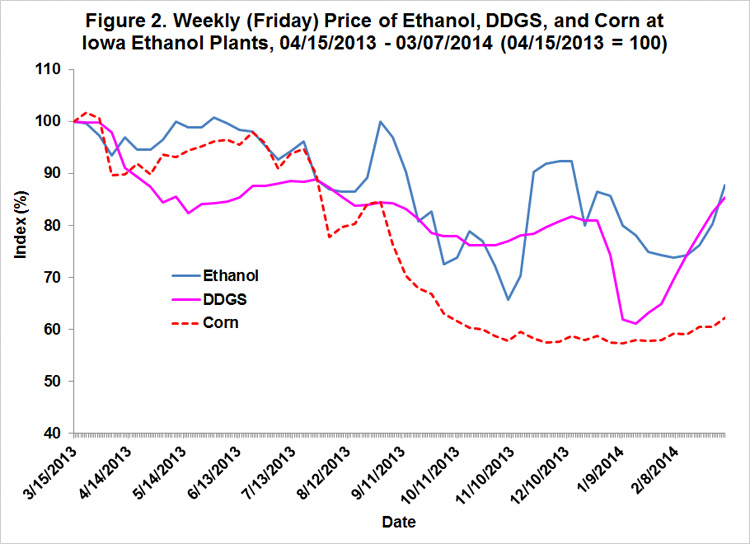 There are reasons to suspect that the recent run of profits is unlikely to continue for an extended period of time.  First, DDGS prices have reached unprecedented levels relative to corn and soybean meal prices (see the post here).  Second, there is a documented “co-integrating” relationship between ethanol and corn prices (see the paper by Mallory, Irwin, and Hays for a formal analysis), which simply means that the relationship between ethanol and corn prices tends to revert to levels implied by an equilibrium long-run level of ethanol production profitability.   If the ethanol price is too high relative to corn prices, then either the ethanol price must fall or the corn price must rise.  For any particular episode it is difficult to know which price will bear the brunt of the adjustment, but history shows that such an adjustment is the norm.  If corn prices are now driving ethanol prices due to the E10 blend wall, as argued in this farmdoc daily post, then one would expect ethanol prices to do the bulk of the adjusting.

Finally, it is helpful to aggregate the profit margins over an annual horizon in order to see broader trends in estimated ethanol plant profitability. Figure 3 shows total annual profits net of variable and fixed costs for each calendar year between 2007 and 2013.  Profits are presented in terms of both total dollar returns to equity holders and percent return to equity.  Profits were highest in 2007 at $25 million, with 2013 profits of $23 million only slightly smaller.   Driven by the high drought-driven corn prices, lowest profits occurred in 2012 with a loss of $7.3 million.  Averages for the seven years were $7.4 million and 5.8 percent, respectively.   The total cumulative return to equity holders for the period was $51.5 million. 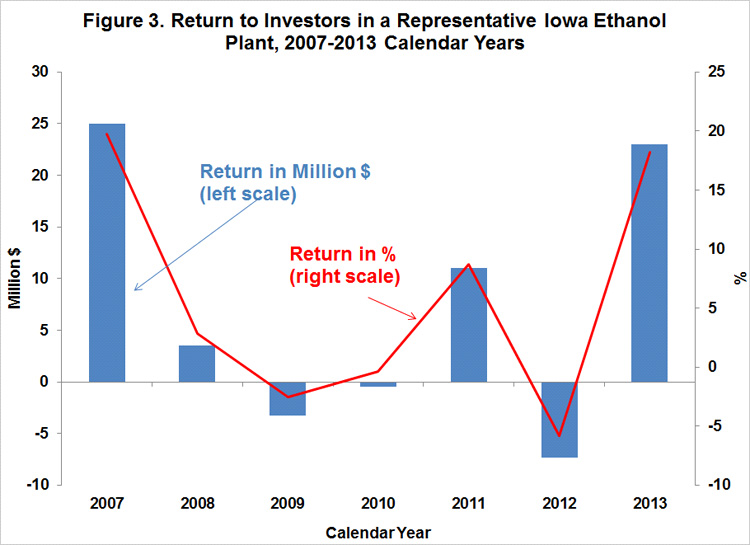 Recent headlines about biofuel policies paint a very negative picture of the biofuel industry. It might then be surprising to learn that ethanol producers over the last year have enjoyed one of their best periods of profitability ever. This has been driven by a drop in corn prices that substantially exceeded the declines in ethanol and DDGS prices. As a result, the ethanol production industry is on a much sounder financial footing after being ravaged by drought-related losses in 2012. A farmdoc daily post next week will examine recent trends in biodiesel production profits.