Returns to farmland likely will vary considerably over the next several years. This variability will make it difficult to set a cash rent that can remain the same for several years. Prices projected for 2015 are lower than likely long-run prices. As a result, cash rents based on 2015 returns may have to be raised in the future. Similarly, rents may need to be lowered if those cash rents were set based on returns in 2010 through 2013, particularly given that prices in 2010 through 2013 were above likely long-run average prices.

Prices and Operator and Land Returns

Operator and land returns are calculated for the following three sets of prices to illustrate difficulties in setting cash rents:

These prices represent the range seen in the past several years. They likely represent a conservative range of prices that will occur in the future. 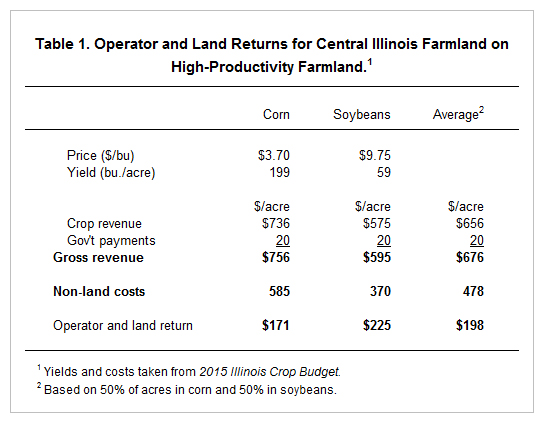 For these prices, operator and land returns are:

Several implications from the above operator and land returns: