Many crop producers are in the process of making the farm program participation decision for the five years beginning with the 2014 crop. Price expectations for this five-year period play a central role in the decision. As a case in point, the farmdoc daily articles on October 14, 2014 and December 18, 2014 illustrate the sensitivity of expected program payments to alternative price projections for 2014/15. Long- term corn price projections are available from several sources, including the USDA’s 10-year baseline forecasts. Given the importance of the program participation decision, the accuracy of these long-term forecasts is of obvious relevance. The purpose of this article is to examine the historical accuracy of two sources of long-term forecasts: i) the USDA’s 10-year baseline forecasts; and ii) the corn futures market.

While price is central to the magnitude of annual program payments, a given price in any year may have different implications for PLC and ARC payments since the formula for determining payments are not the same for both programs. The farmbill toolbox at the farmdoc website has a suite of decision tools to help producers evaluate the program alternatives and select the appropriate alternative for their farms. The tools allow for the evaluation of alternative price scenarios over the five year duration of the program. An important question for producers using these tools is the appropriate price scenarios to consider. In a farmdoc daily article on March 13, 2014, Carl Zulauf and Gary Schnitkey examined the implications of using alternative historical price patterns to forecast the price pattern for the 2014-15 through 2018-19 marketing years. In addition, long-term price forecasts that could be used in the program choice evaluation are available from a number of sources. The USDA, for example, makes 10-year price forecasts in their annual baseline projections released in February each year. An early release of the February 2015 projections can be found here. In addition, the Congressional Budget Office (CBO) makes long-term price projections for agricultural commodities. See page 10 of the CBO’s April 2014 Baseline for Farm Programs for an example. The Food and Agricultural Policy Research Institute (FAPRI) at the University of Missouri also provides long-term price forecasts for agricultural commodities. Forecasts made in December 2014 can be found here. Finally, corn futures prices provide a forecast of corn prices for some duration. Selected corn futures contracts, for example, are currently listed through December 2018, although contracts were not listed that far in the future in previous years. 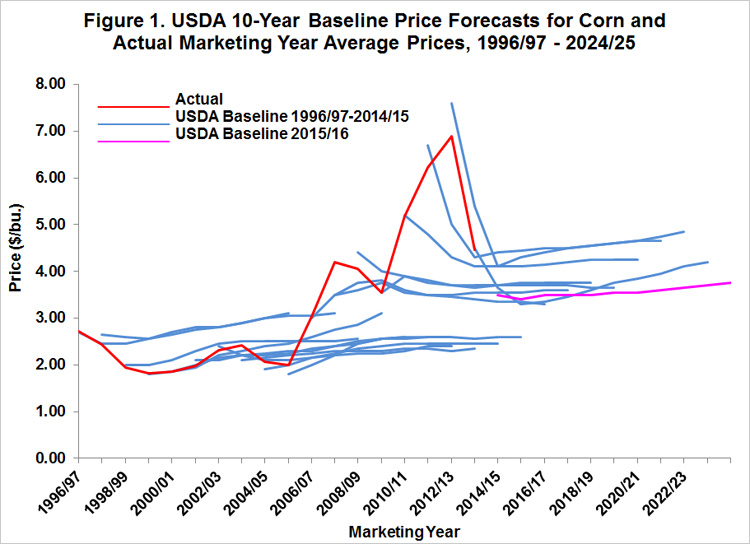 Figure 1 indicates that over the period examined, USDA tended to forecast a “steady-state.” That is, current prices were generally forecast to persist into the future. The exception was during the later period of very high prices when prices were forecast to decline in the early years of the forecast period and then to stabilize at lower prices. Forecasting a steady-state means that forecast errors will be large when supply and/or demand shocks are experienced. The period from 2006/07 through 2013/14 contained a number of supply shocks in the form of low U.S. corn yields, particularly in 2012. In addition, the period represented a time of substantial growth in corn demand from ethanol production. Large price forecast errors are obvious in Figure 1, particularly in the later years.

It is difficult to fully quantify the magnitude of USDA corn price forecast errors for the period examined due to the fact the price for a particular year is forecast several times. Figure 2 shows one measure of the magnitude of forecast errors. The percentage error in USDA’s five-year ahead forecast was calculated for each year in the study period. As generally observed in Figure 1, forecast errors were negative (USDA forecasts greater than actual prices) in the early years and positive (USDA forecasts less than actual prices) in later years. Errors were also larger in the later years, with errors exceeding 40 percent in five of the last eight years. One can reasonably conclude that large forecast errors are the norm rather than the exception. 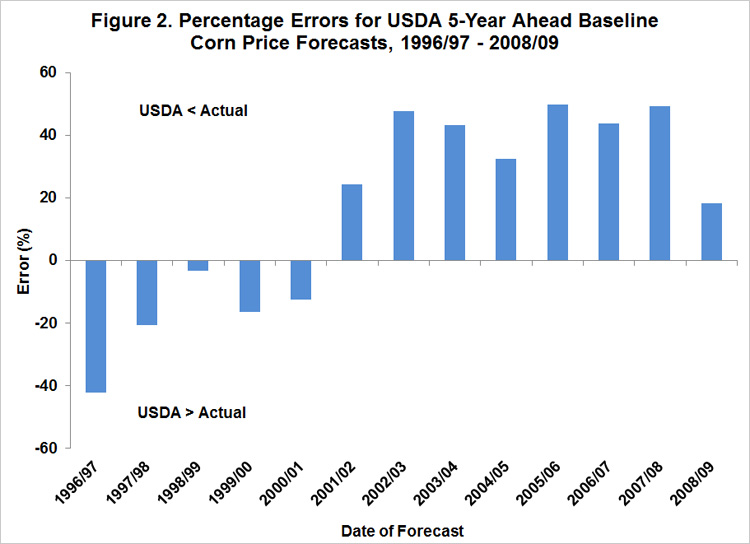 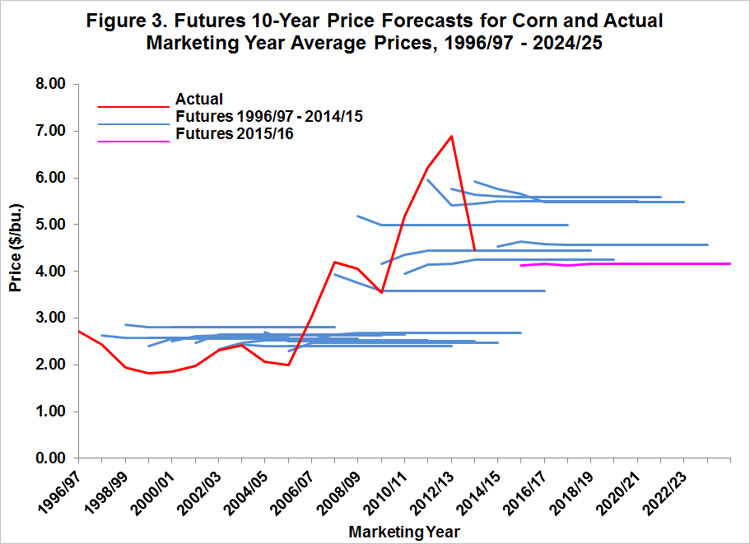 Figure 3 shows that the futures market also tends to forecast a “steady state,” with future prices expected to be essentially equal to current prices, except in cases where current prices are very high. This is consistent with the theory of futures markets for storable commodities where positive differences between current and futures prices are limited by the cost of carry. So, once again, it is not surprising that percentage forecast errors are quite large due to unanticipated market shocks. Note that the results are consistent with analysis of one-year ahead futures prices in an earlier farmdoc daily article by Carl Zulauf (August 7, 2014).

Even though both the USDA 10-year baseline and futures forecasts produced large forecast errors, we would certainly like to know if one is superior to the other. To run this type of “horse race” comparison, we compute mean absolute percentage errors for all forecasts through 2013/14, the last complete marketing year. This resulted in 17 one-year forecasts of corn price, 16 two-year forecasts of corn price, and so on to. Figure 4 shows the mean absolute errors of the forecasts for each time horizon. Not surprisingly, forecast errors were smallest for one-year forecasts and largest for the longer-term forecasts. USDA forecast errors tended to be smaller than the futures market forecast errors for the one-, two- and three-year time horizons, but larger for all longer time horizons except at ten years. This result is especially interesting in two respects. First, the smaller USDA forecast errors for the shorter horizons may be surprising to some in light of the efficient market hypothesis, which implies that futures prices reflect all available information at any point in time. One possibility is that our simplified method of using futures prices to forecast season average prices biases the comparisons against the futures market. Recent research suggests this may well be correct. Second, despite the straight-line method of projecting missing futures prices in the out years, the futures market outperforms the USDA baseline. 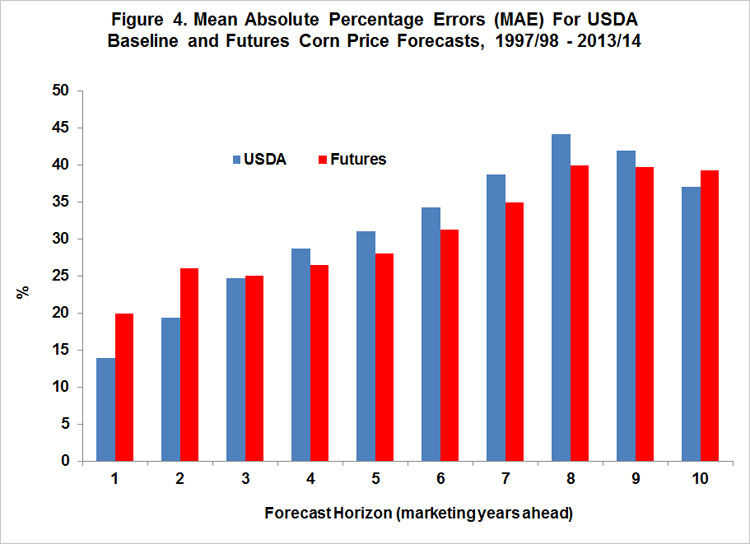 It is important to recognize that our analysis does not suggest that long-term forecasting exercises are without value. This type of modelling work is important for understanding the dynamics of supply and demand in a market as well as the possible impacts of different policies over time.

The analysis of the historical accuracy of USDA 10-year baseline and futures market forecasts of corn prices demonstrates that it is exceedingly difficult to forecast marketing year average corn prices very far into the future. This is due to the basic fact that the magnitude and timing of market supply and demand shocks cannot be anticipated. This implies that long-term forecasts, regardless of the source, may not be very useful in evaluating farm program choices. What then can producers do when making farm program decisions? One response to this kind of uncertainty is to diversify across the choices in order to hedge the risk of making the wrong choice. This could take the form of enrolling some farms in the Price Loss Coverage (PLC) program and others in the Agricultural Risk Coverage (ARC) County program. Another response is to frame the question differently by focusing on the average corn price that might be expected over the 5-year life of the current farm bill. All available current forecasts suggest that prices will average near to slightly higher than current prices. This differs from our “new era” expectations, as summarized in this farmdoc daily article (February 27, 2013), that the average corn price will likely be well above the current level.

Zulauf, C. and G. Schnitkey. "ARC-PLC Decision: Importance of the Price Path - The Case of Corn." farmdoc daily (4):47, Department of Agricultural and Consumer Economics, University of Illinois at Urbana-Champaign, March 13, 2014.