The 2015 Crop Insurance Decision Tool is available for download from the FAST section of farmdoc (click here for download). This January release will quote corn and soybean premiums for the COMBO an ARPI products, as well as provide quotes for the Supplemental Coverage Option (SCO). A YouTube video demonstrating the tool is available here. The 2015 Tool is used to calculate premiums for compassion to 2014 premiums.

Table 1 shows a comparison for 2014 and projected 2015 Revenue Protection (RP) premiums in three Illinois Counties: DeKalb, McLean, and Washington Counties. DeKalb County is in northern Illinois, McLean County in central Illinois, and Washington County is in southern Illinois. These per acre premiums are for corn given that 100 acres are insured using an enterprise unit. The Actual Production History (APH) and Trend-Adjusted APH (yields) are set near the average for each county. Each county’s APH and TA-APH yields are shown in Table 1. The 2015 projected price is set at $4.62, the 2014 projected price. Similarly, the 2015 volatility is set at .19, the 2014 volatility. Setting these value at 2014 levels allow examination of how rate changes made by the Risk Management Agency (RMA) impacts premiums. 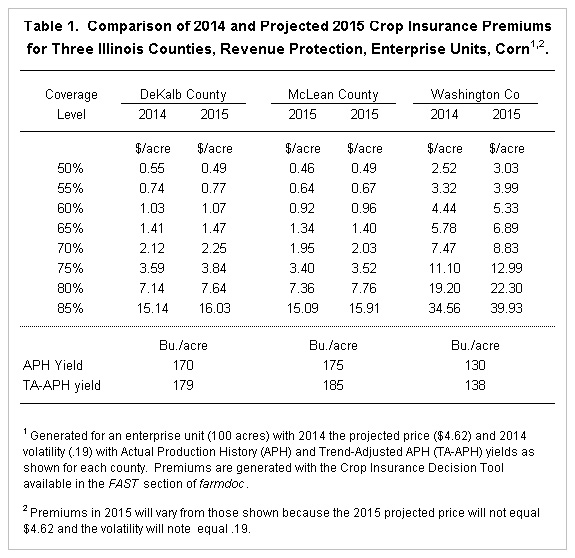 Any number of factors could have caused the increase in premium. One factor is the inclusion of 2012 losses in the calculation of premiums. RMA uses a loss cost methodology in calculating premiums. Performance in 2012 entered into rate calculation for the first time in setting 2014 premium. Due to the drought, 2012 crop insurance losses were large, likely influencing rate determination.

Figure 1 shows an example of SCO premiums. Note that three sets of premiums exist: one for when the underlying product is Revenue Protection (RP), one for RP with harvest price exclusion, and one for Yield Protection. For example, suppose a farmer purchases RP at an 80% coverage level and wishes to purchase SCO. One SCO product would be available providing coverage from 86% to 80%. This SCO product is indicated as “80% — 85%” in the 2015 Crop Insurance Decision Tool and would have a cost of $7.12 per acre. More discussion of the use of SCO will be provided here in the future. 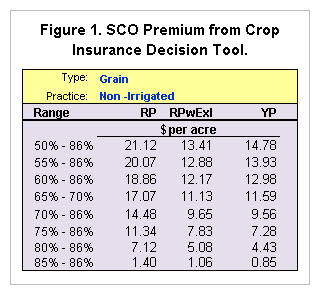 The 2015 Crop Insurance Decision Tool is now available for use. It provides premiums for corn and soybeans. A new feature is quotes for SCO. Final quotes can be made after February when 2015 projected prices and volatilities will be set.