Release of 2014 county production data allows more precise estimates of 2014 Agricultural Risk coverage – county option (ARC-CO). In this article, maps show expected county payments for corn, soybeans, and wheat. Corn is projected to make payments over $40 per acre in many counties, except for a band of counties from eastern Kansas through southern Indiana. Soybeans are expected to pay in some counties. Wheat will make payments, particularly in Kansas and Oklahoma. These payments are compared to Price Loss Coverage (PLC) payments. In 2014, PLC may make modest per acre payments for corn but will not make payments for soybeans and wheat.

FSA will use NASS data in calculating county yields. However, FSA procedures differ from those used by NASS. For soybeans, yield per planted acre from NASS data usually is within a bushel or two of those reported by FSA. For corn and wheat, NASS harvested yields will be equal or above FSA yields. NASS harvested yields are used for corn and wheat because NASS planted yields can be considerably below FSA yields in some cases. Use of yield per harvested acre will cause corn and wheat ARC-CO payments to be underestimated. Because FSA yields are not used in these estimates, payments shown here should be viewed as guides to actual payments.

The 2014 marketing years will end in August 2015 for corn and soybeans and in May 2015 for wheat. Because market years are not over, MYA prices are not known with certainty. The midpoint of MYA price ranges reported in the World Agricultural Supply and Demand Estimates (WASDE) report published in February 2015 are used to create the following maps. In addition, ARC-CO payments are given for the low, mid, and high points of the WASDE range in the spreadsheet available for download here.

Note that these are point estimates made with specific MYA prices. Obliviously, prices can vary, and those variations will impact payments. Maps given below would differ under alternative price assumptions.

Figure 1 shows a map listing ARC-CO payment estimates for all counties in the United States for which data exists. For counties with both an irrigated and non-irrigated series, the payment for the irrigated series is shown in the map. Many counties are expected to have ARC-CO payments above $40 per base acre. These include counties in New York, Ohio, northern Illinois, Wisconsin, Northern Iowa, Minnesota, North Dakota, South Dakota, and Nebraska. These areas did not have exceptionally high yields in 2014. 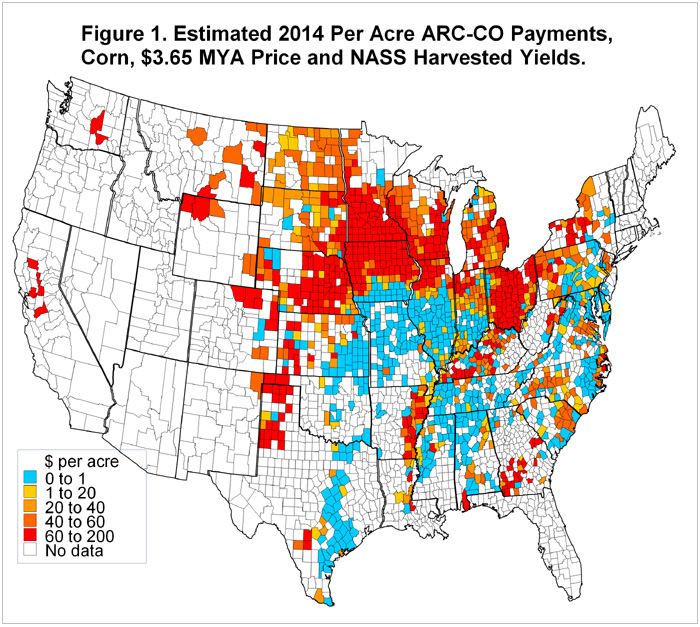 There are counties where ARC-CO payments are expected to be $0 per acre. Most of these counties are from southern Indiana, central and southern Illinois, southern Iowa, Missouri, eastern Kansas, to central Texas. These counties had exceptionally high yields. For example, many counties in central Illinois have yields well above 200 bushels per acre. 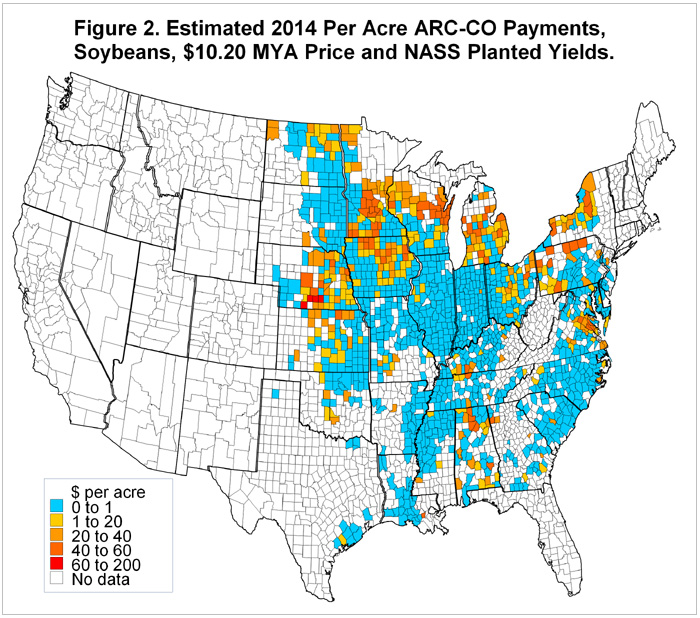 The midpoint of WASDE’s 2015 MYA price range is $6.00 per bushel. Wheat’s reference price is $5.50 per bushel. PLC is not projected to pay for wheat in 2014. Figure 1 shows expected payments for wheat. As can be seen, wheat is expected to make payments in counties in Texas, Oklahoma, Kansas, Washington, and Oregon. 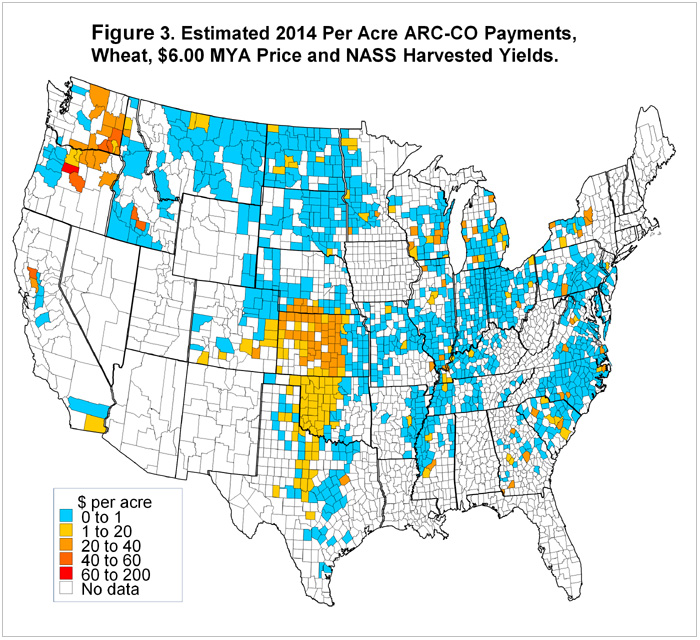 Overall, 2014 expected payments will enter into determinations of program choice. However, the ARC-CO and PLC programs are scheduled to last through 2018. Therefore, expectations of payments in 2015 through 2018 can influence program choice. These payment expectations are influenced by expectations of market prices. In general, ARC-CO likely will have higher payments than PLC when prices average over $3.30 per bushel for corn, $7.80 per bushel for soybeans, and $5.50 for wheat (farmdoc daily January 27, 2015).