On January 26, 2015, the Congressional Budget Office (CBO) published its January 2015 Baseline for Farm Programs. The CBO Baseline indicates the most recent projection for spending on the 2014 Farm Bill’s farm programs (ARC-CO, ARC-IC, PLC, etc.), as well as CBO’s forecasted Marketing Year Average (MYA) prices, planted acres and more. This article takes a closer look at the new CBO Baseline prices as compared to the 2014 CBO forecast for the ARC-CO vs. PLC decision. It focuses on price expectations and builds on a recent article discussing expected payments from ARC-CO and PLC.

The 2014 Farm Bill created a three-way choice for program crop farmers, in essence requiring them to choose among Agriculture Risk Coverage, county option (ARC-CO), Price Loss Coverage (PLC) and Agriculture Risk Coverage, individual farm coverage (ARC-IC). ARC-CO and PLC are the focus of this article. The two programs can be compared because they are crop-by-crop decisions, whereas electing ARC-IC requires that all program crops with base on the farm be in that program.

ARC-CO is a revenue program that compares county average yields and national MYA prices against a moving 5-year benchmark of the Olympic average (drop the highest and lowest) county average yields and MYA prices. By comparison, PLC triggers payments only when the MYA price in a crop year is below the statutorily-set reference price for the commodity. The reference price is also used in ARC-CO (as well as ARC-IC) to replace any MYA that is below it, meaning that the ARC benchmark price will not fall below the reference price. Notably, the MYA price can be much different than the futures price or the crop insurance (projected and harvest) prices. The MYA is the twelve-month average price received by farmers, as calculated by USDA using data collected from elevators across the country. It is the price farmers received when they delivered the grain and it is weighted by the bushels sold at each price. All programs use the same national MYA prices.

Price expectations (and forecasts) are one of the main factors for this decision even though the decision is between a revenue and a price program. This necessarily involves comparing the reference price used by PLC and the 5-year Olympic average prices used by ARC-CO, as well as the forecasted MYA prices in the 2014 through 2018 crop years. What follows, then, are charts making that comparison for each of the crops in the CBO baseline. 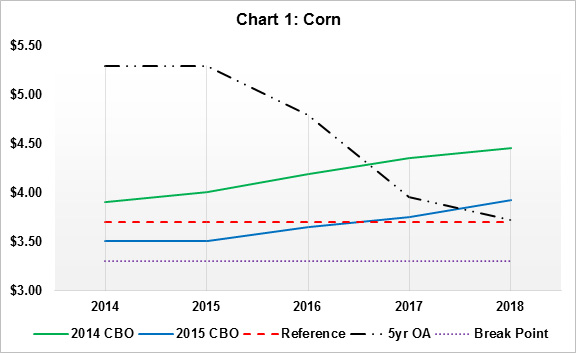 As producers think through the ARC-CO vs. PLC program decision for addressing price risk on corn base, the ARC-CO program’s 5-year Olympic average price component looks to be more effective under CBO’s forecasted market conditions moving from high prices to lower prices. As discussed previously, the price point at which this changes and PLC generally provides better assistance for corn is $3.30 per bushel. MYA prices in that range would be consistently low enough over 5 years to average payments equal to or higher than ARC-CO. The lower 2015 CBO forecast, however, does not include any MYA prices below this break point. It should be noted, however, that ARC-CO is a revenue program and the county average yields will matter both for triggering payments and the amount; high county average yields in particular could reduce or eliminate payments under ARC-CO.

The situation for soybeans is similar to corn, as shown in Chart 2. The 5-year Olympic average price for soybeans in ARC-CO ($12.27 per bushel) starts out far above the PLC reference price ($8.40 per bushel). The 2014 CBO price forecast was substantially above the reference price in all five years meaning PLC would provide no assistance under those prices. The 2015 CBO forecast is much lower and does indicate a PLC payment for the 2015 crop year, but no payments for any other crop year. The 2015 CBO forecast also lowers the ARC-CO price over time to $9.20 per bushel but it remains above the PLC reference price. 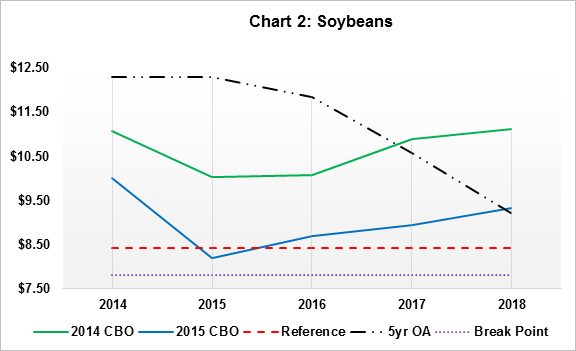 For addressing price risk on soybean base, then, ARC-CO appears to be the more effective program in either one of CBO’s forecasts. The break point for soybeans is also below the reference price and both of CBO’s price forecasts. This further indicates that for soybean base, ARC-CO is expected to be more effective than PLC in providing assistance for the lower range of prices forecasted by CBO. 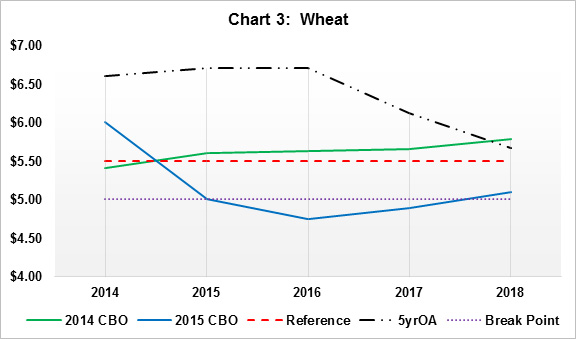 In general, the 2015 CBO forecast would indicate that PLC is the more effective program for addressing price risk on wheat base. The break point price for wheat adds further to that conclusion. In general, at around $5.00 per bushel in each of the 5 crop years PLC provides more assistance than ARC-CO. Chart 3 drives home the point by showing that the 2015 CBO forecast puts MYA prices at or below the break point in the 2015 through 2017 crop years and very close to it in 2018.

The situation for peanuts is completely different than for corn, soybeans or wheat, as shown in Chart 4. The peanut benchmark (5-year Olympic average) price of $0.28 per pound (or $560 per ton) begins much closer to the PLC reference price of $0.2675 per pound (or $535 per ton) and gets closer in the final two crop years ($0.2700 per pound) using the 2015 CBO forecast. Comparing the benchmark price and the reference price is irrelevant for peanuts, however, because the reference price is far above the CBO forecasts. CBO’s price forecast did not change for peanuts between the 2014 and 2015 baseline estimates. 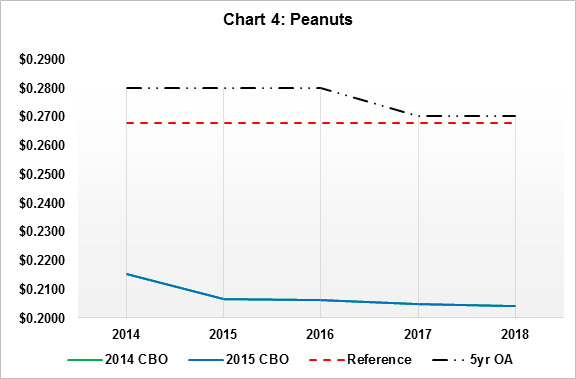 Both programs would be expected to trigger payments all five crop years under the CBO forecast and the only factor for the decision will be which one program pays more. Due to the 10 percent maximum payment and the county average yield components of ARC-CO, PLC payments will be higher under the CBO forecast. No break point is presented because the reference price is much higher than the forecasted prices. For addressing price risk on peanut base, it appears that the PLC program would provide more assistance.

To complete the analysis, Chart 5 looks at long-grain rice. There are three different types of rice covered by the farm programs: long-grain, medium-grain (including short grain) and Japonica. Long-grain and medium-grain both have the same $14.00 per hundredweight reference price, Japonica rice’s reference price is set at 115% of that, or $16.10 per hundredweight. For this discussion, long-grain rice is used. CBO, however, does not produce separate MYA forecasts for long-grain, medium-grain and now Japonica rice. While both long-grain and medium-grain rice have the same reference price, they have significantly different MYA prices according to the Farm Service Agency. Without separate pricing information from CBO, the information in Chart 4 uses the Food and Agricultural Policy Research Institute (FAPRI) at the University of Missouri’s January 2015 price forecast combined with the FSA MYA prices for crop years 2009 through 2013 to calculate the 5 year Olympic average (benchmark) price. 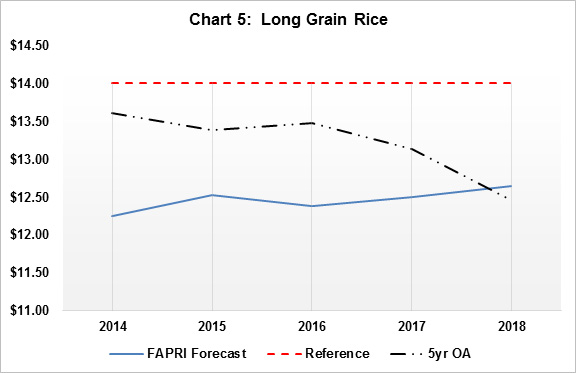 With the above discussion in mind, expected program payments can be quickly and easily compared using the Sample Farms in the Agricultural Policy Analysis System (APAS) online payment calculator or the spreadsheet comparison tool in the Farm Bill Toolbox. Please note that APAS is currently using trend yields for the county average yields to calculate expected ARC-CO payments and it will be updated when the actual 2014 county average yields are known. High yields are expected in many counties for the 2014 crop year and that will impact ARC-CO expected payments. Updated analysis will also be provided when 2014 county yields are known

The Congressional Budget Office January Baseline estimates and price forecasts provide additional information for producer’s consideration as they work through the farm program decision, especially as between ARC-CO and PLC. The CBO Baseline forecasts lower prices for corn, soybeans and wheat than the 2014 forecast. This analysis only considers price risk and tends to indicate that, at least for corn and soybean base, ARC-CO is the more effective program under the CBO forecasted price scenario. By comparison, PLC appears to be more effective for wheat base. The high reference prices for long-grain rice and peanut base acres support the conclusion that PLC is the more effective program. ARC-CO, however, also provides risk for county yield variation and county yields will impact potential payments, so this analysis is only part of what is needed for the program decision. The information provided in this article is intended to help provide context and analysis for making the program decision. Producers are encouraged to use the online web resources and payment calculators to determine expected payments for the base acres on their farms before making the program election by the March 31, 2015 deadline.