Now, following back-to-back big crop years and given projections for another big crop, commodity prices are projected to decline for a third consecutive year ($3.50 per bushel corn and $9.00 per bushel soybeans). Despite the projected decline in commodity prices, expectations on planted acreage are mixed. USDA projects a decline in acres from 2014 to 89.0 and 83.5 million acres for corn and soybeans, respectively. While the trade guess for corn is on par with USDA projections, the trade and USDA are several million acres apart for soybeans. Trade guesses on soybean plantings for 2015 range from a low of 82.1 million acres to a high of 88.3 million acres, and average 86.0 million acres (farmdoc daily February 23, 2015).

In order to provide some perspective on where potential acreage changes in 2015-16 may occur (if at all), today’s article maps the changes in harvested acreage for several major commodities and CRP from the 2005-06 to the 2014-15 marketing years.

As demonstrated in Figures 1 and 2, close to 64 percent of the growth in harvested corn and soybean acres from the 2005-06 marketing year occurred in the Western Corn Belt (Iowa, Kansas, Minnesota, Missouri, Nebraska, North Dakota, and South Dakota) at nearly 13 million acres. Of these states, increases in harvested acres were the greatest in the Dakotas at approximately 7 million acres.

Meanwhile, harvested acreage in the Eastern Corn Belt (Illinois, Indiana, Michigan, Ohio, and Wisconsin) remained stable, growing by only 1.6 million acres since the 2005-06 marketing year and representing only 8 percent of the growth nationwide. Finally, areas outside the Eastern and Western Corn Belts increased corn and soybean harvested acreage by 5.6 million acres, accounting for the remaining 30 percent in the growth nationwide. 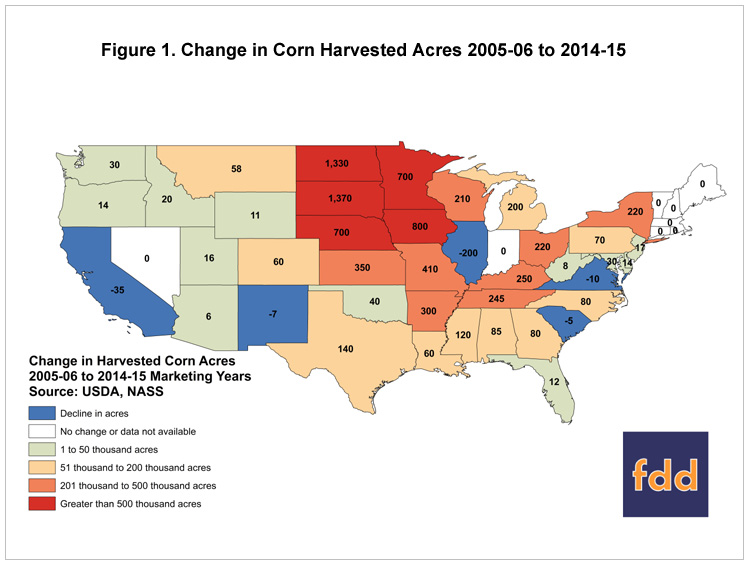 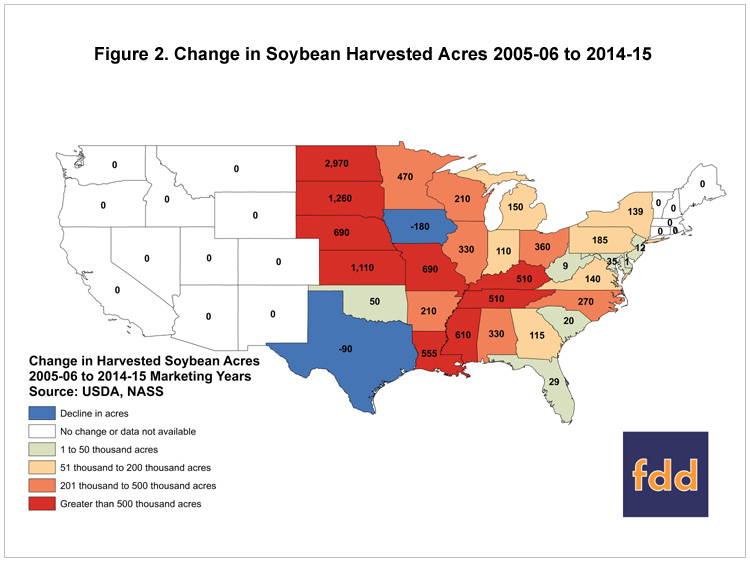 The Migration Away from Base Acres

In order to increase the intensity of corn and soybean production, cropland had to be shifted out of other commodities. The 1996 Farm Bill, or Freedom to Farm Act, decoupled direct payments from planted acreage and increased planting flexibility by allowing farmers to plant outside their commodity-specific base acreage (except fruits and vegetables). This flexibility provided the ability for farmers to alter crop rotation patterns in order to respond to market price signals and expected crop returns.

As demonstrated by Figures 3 and 4, a significant amount of cropland was removed from wheat, cotton, peanut, and rice acres. With respect to harvested wheat acreage, 3.7 million fewer acres were harvested from the 2005-06 to the 2014-15 marketing years. Of that total, the Western Corn Belt removed 3.5 million acres and was led by North Dakota at 1.3 million acres. 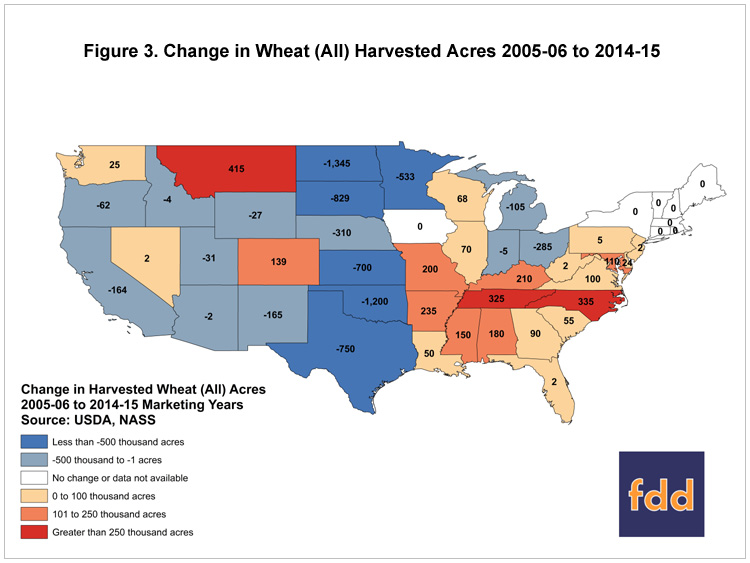 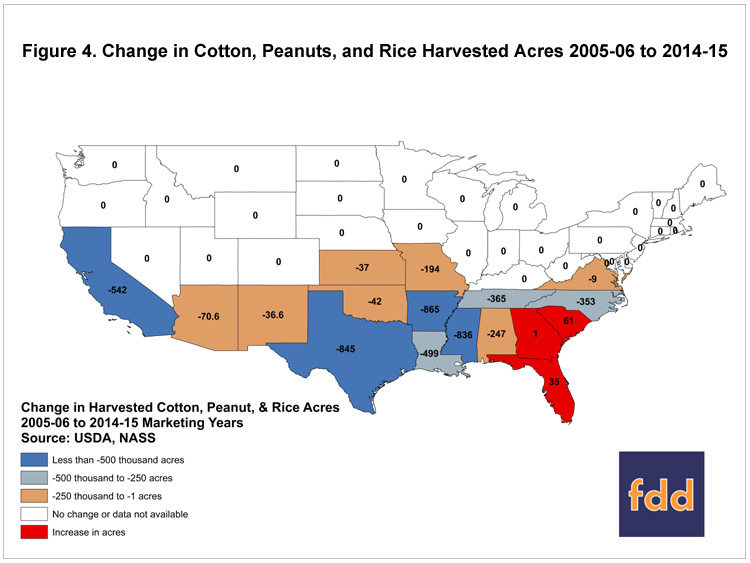 Coming Out of Retirement

Another source of acreage available for corn and soybean production are CRP lands. USDA’s CRP pays U.S. farmers to retire environmentally sensitive cropland. Based on USDA Farm Service Agency data approximately 35 million acres were under contract in the CRP program during the 2005 fiscal year. By 2014, total CRP lands under contract had dropped by nearly 10 million acres (Figure 5).

As demonstrated, the 10 million acre change in CRP lands under contract was heavily concentrated in the Northern and Southern plains. More than 50 percent of the lands coming out of CRP retirement were found in North Dakota, Montana, Texas, and Kansas with a total of 4.8 million acres. While some of those CRP lands are likely to have moved into forage or pasture, as evidenced in Figures 1 and 2 (with the exception of Montana and Texas), a large portion of the decline in CRP lands was likely offset by increases in corn and soybean production. 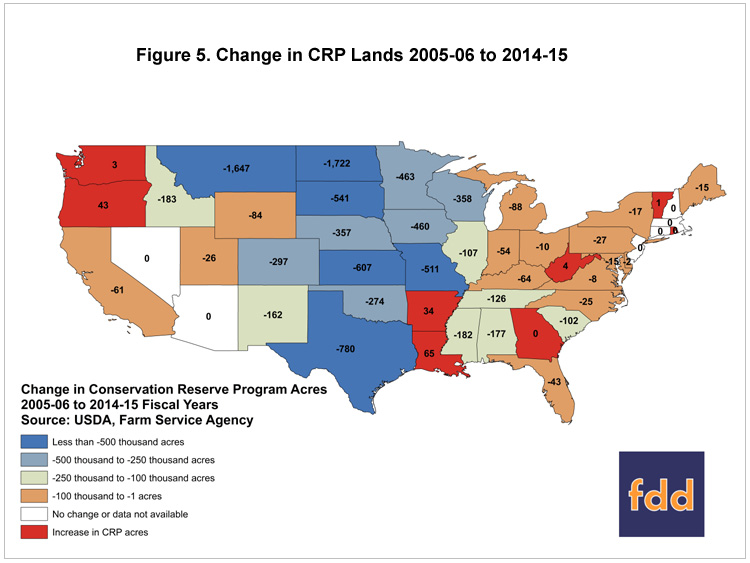 To the contrary, the acreage changes following the 1996 Farm Bill heavily favors corn and soybean production in portions of the Western Corn Belt. For example, in 1995 approximately 3 percent of North Dakota’s total land area was in corn and soybean planted acres. By 2014, this total had climbed to nearly 20 percent (Tableau Public). This is consistent with observed trends of cropland moving out of wheat and CRP lands in recent years to capture the higher returns from corn and soybean markets (Tableau Public).

There are many factors that may affect acreage decisions other than relative prices and profitability that we are not considering here. However, given anticipated declines in corn and soybean prices, the potential exists for fewer planted and harvested acres of corn and soybean acres in 2015. Where are those changes most likely to occur? Recent evidence suggests that the Eastern Corn Belt is more likely to rotate acreage between corn and soybeans based on expected crop returns. In these areas, increased plantings of soybeans could be expected based on relative price strength in soybeans and the lower costs of production (farmdoc daily February 16, 2015). On the other hand, the Western Corn Belt and Southern portions of the U.S have undergone significant changes, moving away from commodity-specific base acreage into a corn and soybean rotation. It is in those areas, then, that acreage moving out of corn and soybeans into another commodity is most likely to occur if a period of low grain prices persists.

The net effect of acreage changes across the U.S. will be revealed soon as USDA’s March 31 Prospective Plantings Report will provide state- and commodity-level insight into planting intentions for 2015.

Irwin, S, and D. Good. "How Long Should We Expect Corn and Soybean Prices to Remain Above or Below Average?" farmdoc daily (3):213, Department of Agricultural and Consumer Economics, University of Illinois at Urbana-Champaign, November 7, 2013.