In 2015, gross revenues for corn on high-productivity farmland in Illinois are expected to be in the mid-$800 per acre range. At this point, both price and yields are uncertain, resulting in many possible levels of crop revenues, crop insurance payments, and commodity program payments. Therefore, actual gross revenues could vary from the mid-$800 projection. Historical price and yield changes suggest that gross revenues could fall within a $317 per acre range. From a historical perspective, low gross revenues of below $750 likely will be associated with harvest prices considerably below projected price and yields at or near trend levels. Mid-revenue cases likely will be associated with yields near or above trend levels and harvest prices near to slightly below the projected price. High gross revenues of over $900 per acre require either harvest prices well above projected prices or yields significantly above trend levels. A significant drought could result in a high revenue year. However, even the high gross revenue cases in 2015 likely will be lower than average revenues from the years between 2010 through 2013. 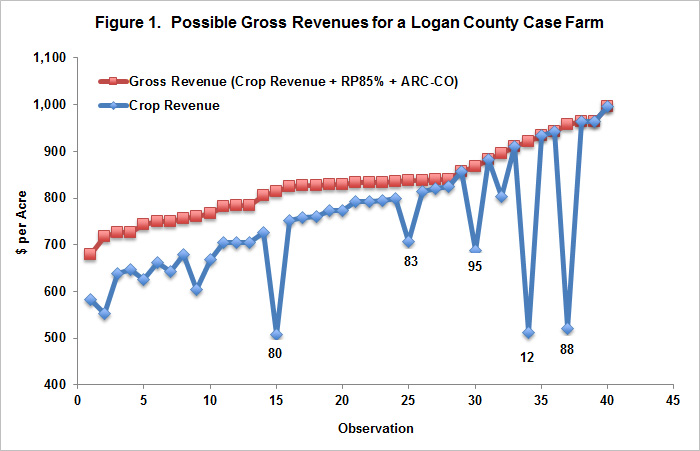 Note that none of the low gross revenue years occurs because of low yields caused by droughts. Those drought years are indicated in Figure 1 by the year of the drought next to its crop revenue. RP 85% and ARC-CO payments occur to cause gross revenue to not be in the lower end of the distribution.

Using history as a guide, lower gross revenues likely will be associated with lower prices and near average yields.

A generalization of middle gross revenue years is that yields are near or above trend and harvest prices are at or below the projected price. Neither yields nor prices are especially low. Lower revenues are not low enough to trigger large RP 85% payments.

There are eight cases with revenue above $900 per acre. Characterizing these cases is more difficult than for the low and middle revenue cases. There are three types of situations resulting in these high gross revenues:

Overall, high gross revenue cases are likely associated with either higher harvest prices or higher yields. Given inverse correlation between prices and national yields and the importance of Illinois in overall supply, it is difficult to have both a higher price and higher yield.

For 2015, high revenues are projected at over $900 with a maximum of $998 per acre. This 2015 highs are below $1,052 per acre, the average gross revenue from 2010 to 2013 on central Illinois farms on high-productivity farmland enrolled in Illinois Farm Business Farm Management (see Table 1 of the April 21st farmdocDaily https://farmdocdaily.illinois.edu/2015/04/projected-2015-corn-revenue-with-comparisons.html). Historical price and yield changes suggest that 2015 gross revenue will be below averages for 2010-2013 range.

Schnitkey, G. "Projected 2015 Corn Revenue with Comparisons to Revenues from 2010 to 2014." farmdoc daily (5):73, Department of Agricultural and Consumer Economics, University of Illinois at Urbana-Champaign, April 21, 2015.