Farmer-paid diesel fuel prices averaged $2.30 per gallon for purchases made in March 2015. The March 2015 prices were 36% lower than the $3.58 per gallon average during March 2014. In 2014, fuel costs averaged $24 per acre for corn grown in central Illinois. If a 36% decrease occurs, similar to that for diesel fuel prices, fuel costs would be reduced by $9 per acre. While helpful, a $9 per acre decrease only represents a 1.5% decrease in non-land costs.

As one would expect, diesel fuel prices closely follow crude oil prices, as is illustrated in Figure 2. Figure 2 shows diesel fuel price as reported in the Illinois Production Cost Report and the spot price of Brent Crude Oil as reported by the Energy Information Agency. So as to maintain the same scale, bi-monthly prices were divided by their mean levels from January 2010 to March 2015: $3.26 per gallon for diesel fuel and $99.63 per barrel for Brent Crude. As can be seen in Figure 2, diesel and crude oil price are highly correlated. The correlation coefficient between the two series is .93. 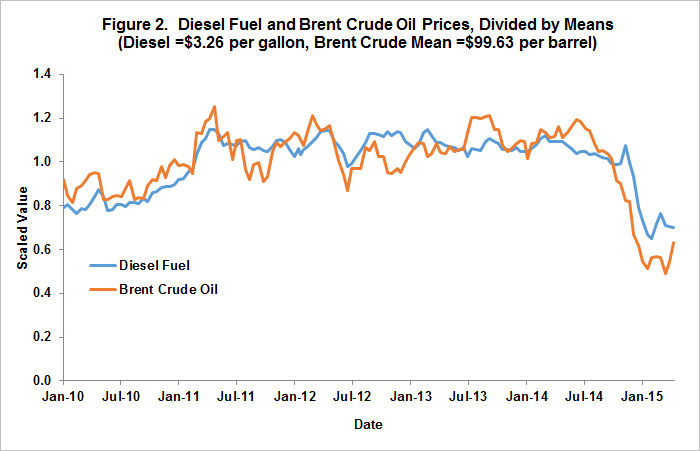 Impacts on Per Acre Costs