Total economic costs in 2013 for Illinois beef feeding enterprises exceeded total returns by $15.60 per 100 pounds of beef produced on beef feeding farms enrolled in Illinois Farm Business Farm Management (see Figure 1). The 2013 returns were higher than the 2012 returns, where total costs exceeded total returns by $21.24 per 100 pounds produced. Total returns have exceeded total economic costs eight out of the last ten years. The 2013 level of returns was $5.36 per 100 pounds beef produced below the average returns for the 2004 through 2013 time period. Figure 1 illustrates average returns, cash operating costs and total costs for the 2004 through 2013 time period. 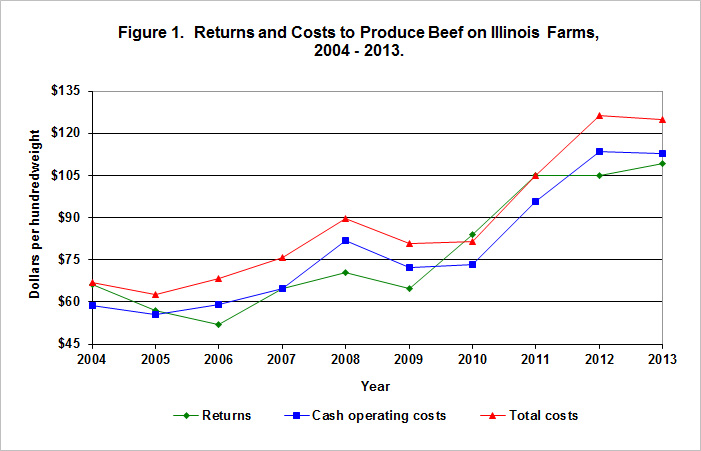 Higher total returns due to higher market cattle prices contributed to the higher total returns for these enterprises. Total returns per 100 pounds produced increased from $104.98 in 2012 to $109.27 in 2013. Total returns for 2013 were the highest on record. The average price received per 100 pounds of beef sold of $122.87 was about 5 percent higher than 2012. This was the highest price received since this study began and the third year in a row that the price received averaged over $100 per hundredweight and the first time the price has averaged over $120. The average price paid for feeder cattle replacements in 2013 of $141.12 was about 3 percent higher than 2012. The 2013 prices paid for feeder cattle replacements are the highest since this study began. The price paid for feeder cattle in 2012 and 2013 were the only years where the price paid averaged over $130.00 per hundredweight. The purchase cost of feeder cattle is subtracted from finished cattle sales in determining total returns per 100 pounds produced.

Returns to cattle feeders increased in 2013 compared to 2012 but were below the last four year average. Higher total returns due to lower prices paid for feed and higher prices received for market cattle were the main factors for the increased returns. Lower feed costs offset some of the higher cash operating expenses. Returns to cattle producers in 2014 will be supported by higher finished cattle prices and the possibility of lower feed prices. Feed costs will decrease in 2014 due to lower corn and forage prices. Higher finished cattle prices and significantly lower feed costs will most likely result in returns to cattle feeders in 2014 above 2013 returns as well as total returns above total costs.

A more thorough report can be found at the University of Illinois farmdoc website here.