As we indicated in our farmdoc daily article of April 9, 2015, the 2014-15 marketing year average farm price of corn, currently projected by the USDA to be in a range of $3.55 to $3.85, will likely be the lowest marketing year average since 2009-10 and about $2.00 per bushel less than the average of the previous four years. Lower prices have resulted in much narrower operating margins for many corn producers and have resulted in a substantial slowdown in machinery and equipment purchases and some downward pressure on cash rent levels and land values. Corn prices during the 2015-16 marketing year will be pivotal in determining if these financial pressures continue, worsen, or are reversed.

At this juncture there are differences of opinion about the likely level of prices during the year ahead, with most expecting prices to provide minimal relief from narrow operating margins being experienced this year. USDA projections from the February Outlook Forum include an average farm price for corn of $3.50. This month’s projections from the Food and Agricultural Policy Research Institute (FAPRI) at the University of Missouri include an average farm price for corn of $3.86. Our own projection from an April 1 webinar is for an average price of $4.25. Price projections differ because of different expectations about the supply of corn, the strength of corn demand, and the interaction of supply and demand to determine price. 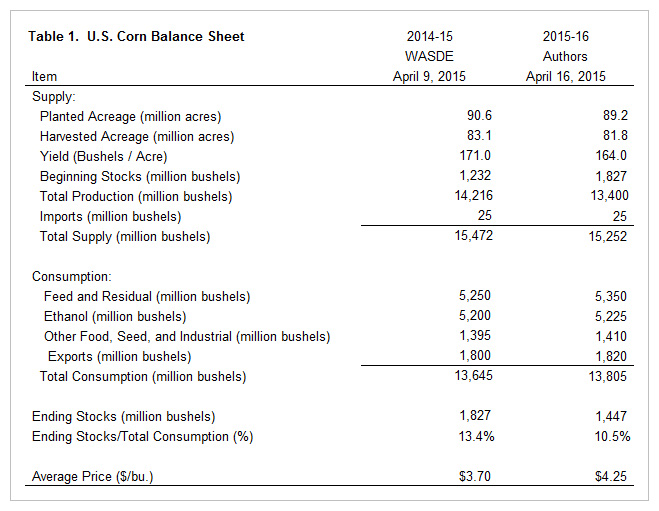 Projections of consumption should not be completely independent of prices and price expectations. However, current projections point to abundant supplies and expectations that rationing of use will not be required during the upcoming marketing year. As a result, consumption in most categories of use is not likely to vary substantially with prices in some range around a “modest” level. In particular, demand for food and industrial products is quite price inelastic. Corn demand for ethanol production may also be very price inelastic over a wide range of prices given the mandate for consumption and the constraint of the 10 percent blend wall. Corn export demand will be influenced by a wide range of factors in addition to price. Historically, domestic feed consumption is thought to be most responsive to corn prices. Even in that sector, however, livestock production decisions implemented over the next few months will largely determine feed use of corn next year. Here we make consumption projections independent of price expectations, while acknowledging that to some extent consumption and price are determined simultaneously.

Corn use for ethanol production is projected at 5.2 billion bushels for the current marketing year. We project use at 5.225 billion bushels for the upcoming marketing year, reflecting expectations that domestic motor fuel consumption will increase slightly and ethanol exports will remain near the level expected for this year. While the EPA’s announcement regarding the magnitude of biofuels mandates for 2015 and 2016 expected in June may have some impact on actual ethanol production and corn use, the domestic ethanol blend wall will continue to constrain consumption. Non-ethanol domestic processing use of corn is projected to increase by 15 million bushels, to a total of 1.41 billion bushels, which is in line with the long-term trend increase.

Exports of U.S. corn are most difficult to anticipate due to uncertainties about world production of competing grains, world economic growth, and currency values. We expect exports to be within the 1.54 to 1.98 billion bushel range of the previous seven years (excluding the unusually small exports of 2012-13) and project exports at the average of 1.82 billion bushels experienced during that period. 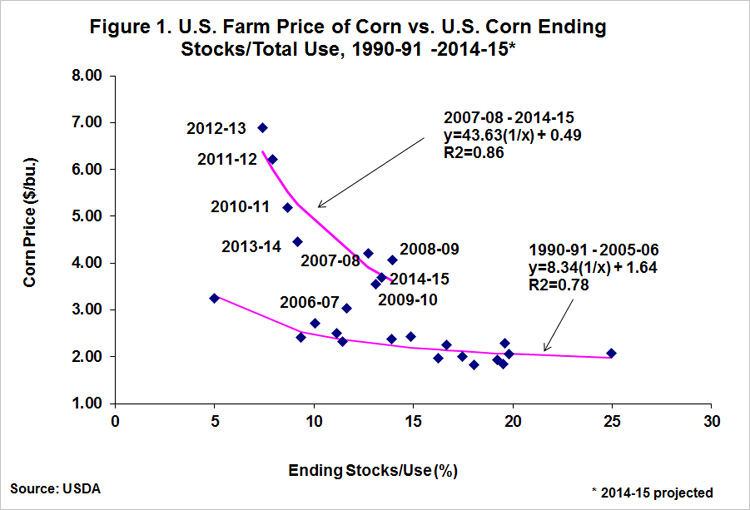 The forecast of $4.65 should be viewed with some reservation, even if the balance sheet has been correctly projected, for at least three reasons. First, there has been enough variation in the relationship between stocks and price over the past eight years that the relationship in 2015-16 could deviate from the predicted value based on the fitted relationship in Figure 1. Second, while not yet reflected through the current marketing year, some weakness in corn demand could result from a continuation of strength in the U.S. dollar. Such weakness would result in lower prices for a given stocks-to-use ratio. Third, small changes in the projected stocks-to-use ratio have a relatively large impact on expected price, particularly at smaller ratios of stocks-to-use. We are reluctant to forecast an average price as high as implied by the projected stocks-to-use ratio. Still, an even more modest projection would be above the most recent forecasts made by others and above current market prices for the 2015-16 marketing year.

Working backwards from the equation for 2007-08 through 2014-15 in Figure 1, we can compute the stocks-to-use ratio implied by the price projections from other sources. For example, the USDA projection of $3.50 implies an ending stocks-to-use ratio of 14.5 percent when solving the model as follows,

Our current projected 2015-16 corn balance sheet points to an ending stocks-to use ratio of 10.5 percent. That compares to ratios ranging from 12.0 to 14.3 percent implied by other balance sheet or price projections. Some of the difference with other projections lies in different balance sheet projections. Our projected yield and crop size is smaller than projected by others and probably smaller than expected by the market. In addition, our projection of 2015-16 marketing year consumption is 50 million bushels larger than the latest USDA projection and 150 million bushels larger than the FAPRI projection. Finally, others may draw different price implications from the same projections of production, consumption, and ending stocks. The USDA, for example, appears to be expecting a much weaker demand structure than what we forecast. That weaker demand would be expressed as a leftward shift in the relationship between the price of corn and ending stocks-to-use. Our analysis suggests there is potential for new crop corn prices to move higher if: i) this year’s growing season points to a U.S. average yield at or below trend value of 164 bushels; and/or ii) demand is not as weak as some appear to be assuming. We maintain expectations for a 2015-16 marketing year average price near $4.25.

Irwin, S., and D. Good. "Forming Expectations for the 2015 U.S. Average Corn Yield: What Does History Teach Us?" farmdoc daily(5):36, Department of Agricultural and Consumer Economics, University of Illinois at Urbana-Champaign, February 26, 2015.