Projected prices are used to set guarantees on crop insurance products. In most cases, these projected prices are averages of settlement prices of futures contracts during a specified period. For corn and soybeans grown in the Midwest, the establishment period is February and Chicago Mercantile Exchange Contracts are used. The December 2015 contract is used for 2015 corn crop insurance products. The November 2015 corn contract is used for 2015 soybean products.

MYA prices are used to determine payments on Federal commodity program payments. MYA prices are calculated by the National Agricultural Statistical Service and represent national, cash prices received by farmers. Market years for both corn and soybeans begin in September and end in August. In this article, forecasts are generated for the 2015 marketing year (September 2015 through August 2016). 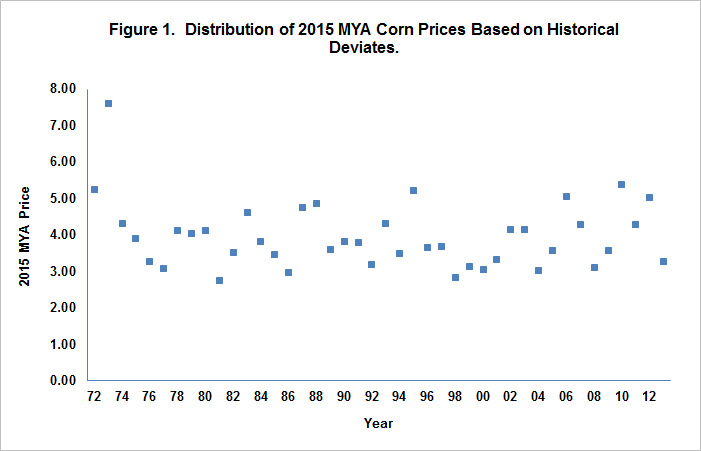 Note that the forecasts are for the 2015 market year. Federal commodity programs are scheduled to run from 2014 to 2018. Estimates of 2014 prices are provided by World Agricultural Supply and Demand Estimates Report. The February 2015 report places the midpoint 2014 MYA prices at $3.65 for corn and $10.20 for soybeans. 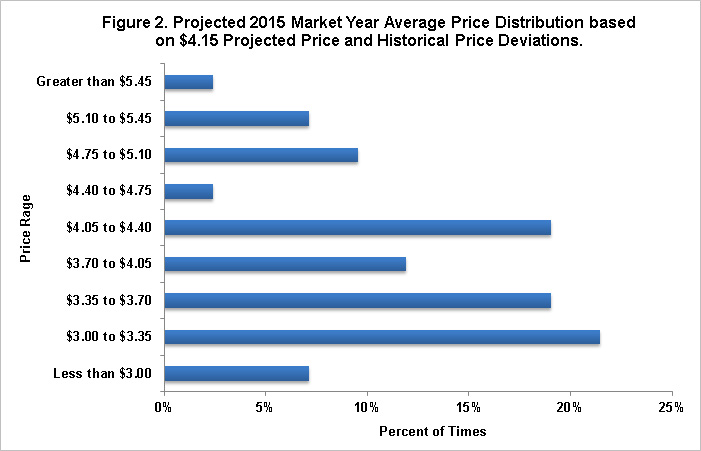 These price forecasts can be used to make forecasts of Price Loss Coverage (PLC) and Agricultural Risk Coverage – County (ARC-CO) payments for 2015. Estimating ARC-CO payments require yield estimates. Detrended county yields for McLean County, Illinois are used. The expected 2015 payment for PLC is $27 per acre using a 162 bushel per acre PLC payment yield. The expected payment for ARC-CO is $51 per acre. ARC-CO having higher payments than PLC are generalizable over a wide range of counties.

A $9.60 projected price results in a 2015 MYA price forecast of $9.84 per bushel. A distribution of possible prices is shown in Figure 3. There is a 26% chance of price being below the $8.40 reference price. There also is considerable chance of higher prices. Historical variability points to a 12% chance of a price above $11.90 per bushel. 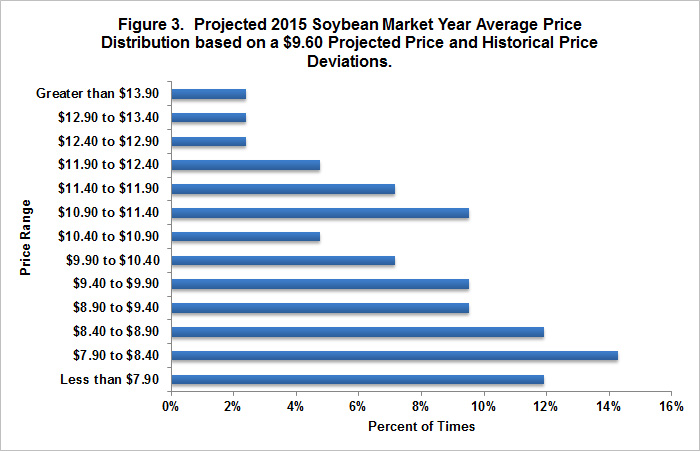 For a 55 bushel per acre PLC yield, the expected 2015 PLC payment is $7 per base acre. The expected ARC-CO payment for McLean County Illinois is $29 per base acre. ARC-CO having a higher payment than PLC is generalizable over a wide range of counties.

Several comments relative to these estimates:

The following two papers deal with looking at historical price variability associated with market year average prices. These use a longer time period than used in this article, resulting in lower estimates of PLC payments: