(A YouTube video related to this farmdoc daily article is available here.)

Farmland returns in 2015 are projected for central Illinois farms having high-productivity farmland. Projected operator and land returns are lower in 2015 than in any year from 2010 to 2014. Cash rents at average levels result in projected 2015 losses to farmers. Overall, 2015 average cash rents would have to decrease by $67 per acre before operator and land returns exceed cash rents. Projected share rents are lower in 2015 than in recent years. Projections of gross revenue and non-land costs are used to arrive at the above return levels.

Figure 1 shows yearly per acre gross revenues for corn and soybeans grown in central Illinois on high-productivity farmland. Also shown is a line giving a “blend” average with 55% of revenue coming from corn and 45% from soybeans, the average percent of corn and soybeans planted in 2014. Figure 1 contains actual values from Illinois Farm Business Farm Management (FBFM) for 2000 through 2014. Figure 1 also includes a projection for 2015 based on: 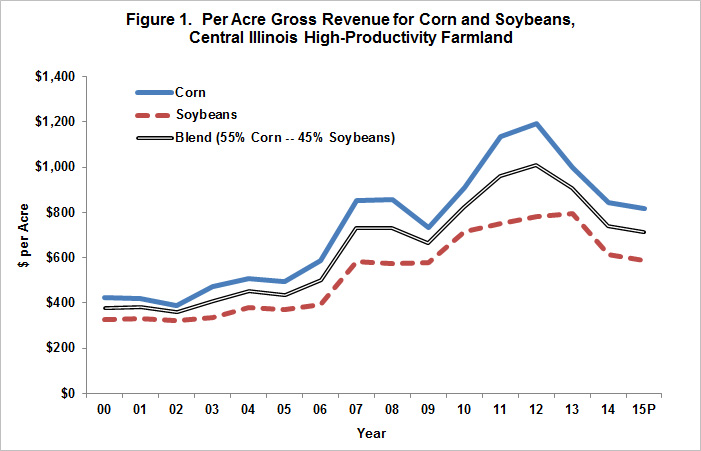 Obviously, both 2015 prices and yields are not known at this point, leading to uncertainty concerning possible gross revenues. In an April 28th farmdoc daily article, historical yield and price changes were used to gain an understanding of possible 2015 gross revenues. This historical analysis suggests gross revenues can vary from $679 per acre up to $996 per acre, with gross revenues in low to mid $800 per acre being most likely.

For corn, non-land costs increased from $302 per acre in 2006 to $615 per acre in 2013 (see Figure 2). In 2014, costs decreased slightly due to lower fertilizer costs. While some costs such as fuel costs are projected to decrease in 2015 (farmdoc daily, May 5, 2015), there will not be large non-land cost decreases. Input prices for fertilizer, seed, and chemicals in 2015 are the same or higher as in 2014. Before significant non-land costs occur, costs reductions must occur in one of the “big 4” cost items: fertilizer, seed, chemicals, and machinery depreciation (farmdoc daily, September 16, 2014). Therefore, non-decreasing fertilizer, seed, and chemical costs signal that non-land costs in 2015 will be near the same levels as in 2014. Unusual pest pressures or grain harvest moistures could alter costs somewhat. 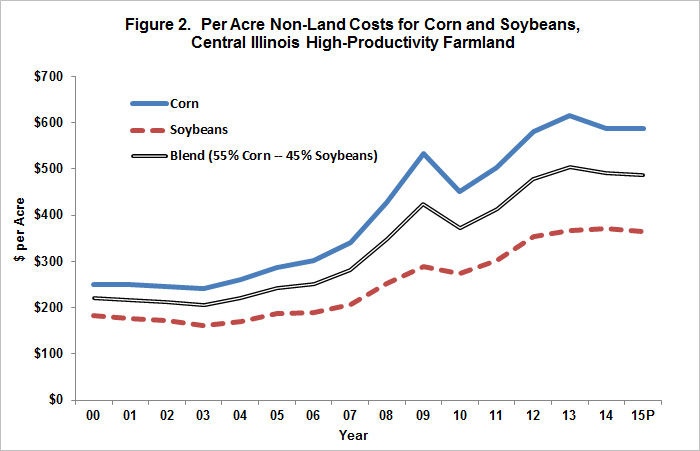 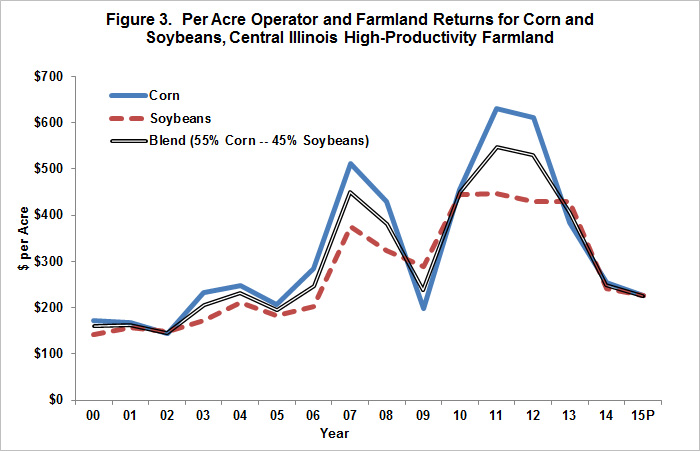 Figure 4 shows average cash rents for high-productivity central Illinois farmland. There is a considerable range in cash rents around these averages. Some cash rents can be over $100 higher than these averages (farmdoc daily, September 10, 2013). Rents above averages also imply cash rents below the average. 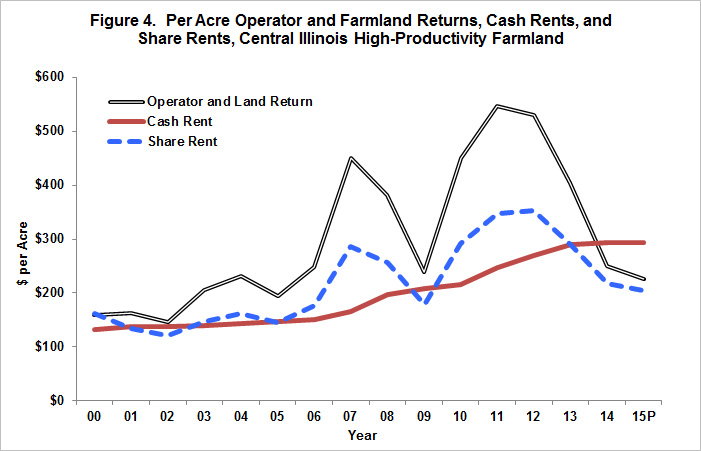 Also shown in Figure 4 is an inputted share rent based on a 50-50 share of gross revenue and direct costs, plus a $25 per acre supplemental rent paid by the farmer to the landowner. Share rents were higher than average cash rents from 2010 through 2013, but below average cash rents in 2014 and 2015. In 2015, returns to a share rent landowners are projected at $205 per acre, leaving the farmer a $21 per acre return.

Share rent arrangements automatically adjust to changes in prices, yields, and direct costs. As a result, the lower commodity prices in 2014 and 2015 led immediately to lower share rents. Interestingly, share rents arrangement’s landowner return averaged higher than cash rent returns from 2010 through 2014. The average share rent from 2010 to 2014 was $266 per acre, $40 lower than the average cash rent of $226 per acre.

Farmland returns are projected to be lower in 2015 than in recent years. If projections hold, farmers will face losses under many cash rental situations. Share rents will continue to decline in 2015 from 2014 levels.

If prices do not rebound significantly, there will be pressures to reduce cash flows for the 2016 year. Farmers will need to reduce one or more of the following costs: fertilizer, seed, chemical, and cash rents. If these costs do not decrease and commodity prices remain at their current levels, expectation will be that farmers will face losses in 2016 on cash rent farmland.

Schnitkey, G. "Projected 2015 Corn Revenue with Comparisons to Revenues from 2010 to 2014." farmdoc daily (5):73, Department of Agricultural and Consumer Economics, University of Illinois at Urbana-Champaign, April 21, 2015.