With the introduction of the 2014 Farm Bill’s Margin Protection Program for Dairy Producers (MPP-Dairy), USDA now reports two different national average estimates of dairy feed costs each month. These monthly feed price calculations include Farm Service Agency’s (FSA) MPP-Dairy national average dairy feed cost, and the Economic Research Service’s U.S. estimate of total feed costs. MPP-Dairy is a farm safety net program administered by USDA FSA, and program payments are triggered using FSA-estimated dairy feed costs. However, the presence of an alternative, and higher-valued ERS estimate of dairy feed cost may represent a source of confusion with respect to MPP-Dairy performance given that both feed cost estimates are announced near the end of the month and both draw upon data from the National Agricultural Statistics Service (NASS) Agricultural Prices report.

As discussed in several farmdoc daily articles (April 15, 2015, February 11, 2015, September 26, 2014) MPP-Dairy is a voluntary dairy farm safety net program which makes payments when the national average income-over-feed-cost margin falls below a farmer-selected coverage level. The margin is defined as the difference between the USDA NASS U.S. all-milk price and the estimate of national average feed costs (MPP-Dairy ration). The MPP-Dairy margin was not designed to reflect farm-level milk or feed costs, instead it was designed to be a national policy trigger mechanism.

MPP-Dairy uses fixed ration coefficients on the corn, soybean meal, and alfalfa hay prices to estimate average feed costs. Using USDA reported prices, the MPP-Dairy average feed cost is straightforward to calculate and is given by the following formula: 1.0728*(NASS corn $/bushel) + 0.00735*(AMS soybean meal $/ton) + 0.0137*(NASS alfalfa hay $/ton). Importantly, these MPP-Dairy feed ration coefficients include a 10 percent reduction by Congress from the original computations by National Milk Producers Federation (National Milk Producers Federation, 2010). Based on these coefficients, approximately 50 percent of the MPP-Dairy feed ration is represented by the corn price, followed by soybean meal price at 27 percent, and the alfalfa hay price at 24 percent.

USDA’s ERS releases annual and monthly milk cost-of-production (COP) estimates. The monthly ERS estimates of dairy feed cost are not as reliable as the annual estimates and are for reference purposes only. As ERS puts it:

“Users of the monthly milk COP estimates need to be aware that these estimates are not as reliable as the annual estimates published by ERS. […] The monthly estimates are simply an attempt to reflect how price and production variations in each month cause costs to vary. Also, the monthly cost estimates become less reliable the longer the time interval between the update month and the year in which the last ARMS was conducted.”

As part of the COP report, ERS includes estimates for purchased feed, homegrown feed, grazed feed, and total dairy feed costs. The ERS estimate of total feed costs does not employ fixed ration coefficients or directly utilize USDA reported prices for corn, soybeans, soybean meal, or alfalfa hay. Instead, the method for determining ERS total feed costs is based on Agricultural Resource Management Survey (ARMS) data of milk producers, NASS Agricultural Prices indexes for feed concentrates and hay and forage, and an ERS-derived measurement of cow productivity. First, weighted-average costs of feed from the most recent 2010 ARMS survey are used to establish baseline values for purchased, homegrown, and grazed feed costs. The ARMS feed costs reflect actual purchased, homegrown, and grazing feed costs for the dairy farms represented in the survey. Then, to account for monthly price variations in the feed costs, the ARMS feed cost estimates are multiplied by the appropriate concentrates or hay and forages indexes. Finally, to account for the monthly variation in milk production per cow the feed costs are divided by an index measuring dairy cow productivity. The relevant formulas for ERS milk feed costs can be found online.

Two components of the ERS feed costs formulas are worth noting. First, by including a daily average milk per cow index, improvements in animal productivity and seasonal changes in milk output per cow are reflected in the cost of production estimate. As demonstrated here, milk per cow is captured in the denominator of the ERS feed cost formulas. Thus, as the daily average milk per cow increases, ERS feed costs per hundredweight decrease, holding all else constant. This is best demonstrated by taking the derivative of ERS feed costs with respect to the milk production index: f(x)= 1/x and f'(x)=-x2. Doing so reveals a negative relationship between milk production and ERS feed costs. As a result, this productivity adjustment may lead to significant month-to-month changes in ERS-estimated total feed costs even if feed prices remain unchanged.

Second, the components included in the NASS concentrates and hay and forages indexes do not capture corn price variations. The NASS hay and forage index is based on the monthly prices for alfalfa hay and other hay. The NASS concentrates index is based on annual prices for cottonseed meal and soybean meal.[3] Noticeably missing from the ERS estimate of feed cost is an index-based adjustment using the NASS corn price. NASS does report a complete feeds index which includes, among other items, a 16 percent dairy feed ration and a 32-38 percent dairy feed ration. The complete feeds index also includes feed cost measurements for cattle, hogs, and poultry and is not used to update the ERS estimate of dairy feed costs. By using only the concentrates index (cottonseed and soybean meal) to update dairy purchased feed costs ERS does not capture the impact of corn price spikes to the same degree as MPP-Dairy (or the NASS 16 percent ration). Figure 1 plots the ERS and MPP-Dairy estimates of dairy feed costs. 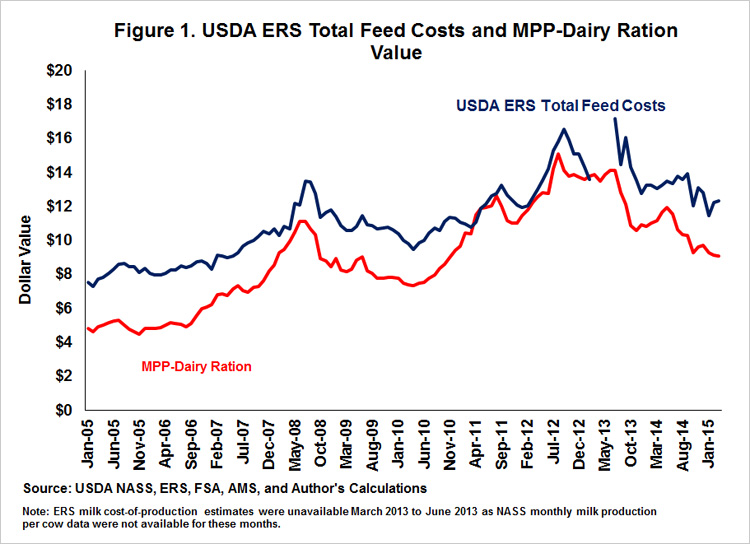 Comparing the MPP-Dairy dairy ration with the ERS estimate of total feed costs in Figure 1 reveals that the two price series are highly correlated (coefficient equals 0.94). While the prices tend to move in the same direction, the average difference between the two series is $2.09 per hundredweight, favoring the ERS feed costs. The MPP-Dairy margin exhibits greater variability with a variance of $8.21 per hundredweight and a coefficient of variation that is 58 percent greater than the ERS estimate of feed costs.

The differences in the feed cost estimates can be traced to four sources. First, the MPP-Dairy ration developed by National Milk Producers Federation proposed a feed ration consisting of 1.1921 bushels of corn, 0.0082 tons of soybean meal, and 0.0152 tons of alfalfa hay. Congress subsequently reduced each of the MPP-Dairy feed ration coefficients by 10 percent. This reduction resulted in an average decline of $1.01 in MPP-Dairy estimated feed costs. Thus, had the original ration coefficients been used the difference between ERS total feed costs and the MPP-Dairy ration would have averaged only $1.08 per hundredweight, Table 1. 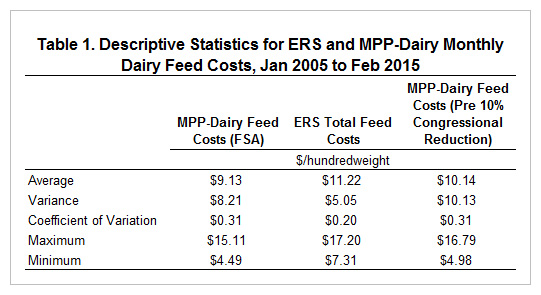 Second, the absence of a monthly corn price index in the ERS calculation leads to ERS underestimating, or MPP-Dairy overestimating, the impact of corn price spikes on dairy feed costs. The corn price represents approximately 50 percent of the MPP-Dairy ration and is in line with the NASS 16 percent dairy ration which is 51 percent corn. However, regression results of ERS total feed costs revealed that the NASS corn price explained only 33 percent of the variation in monthly ERS dairy feed costs. Appropriately then, there is a strong negative correlation between corn price spikes and the difference between the ERS and MPP-Dairy feed rations (coefficient equals -0.78). The impact of corn price spikes on the two feed costs estimates is demonstrated in Figure 2. As the corn price increases the difference between the two series decreases, e.g. 2011 to 2012. This effect is directly attributable to different contributions of the corn price in each of the USDA-estimated dairy feed rations. 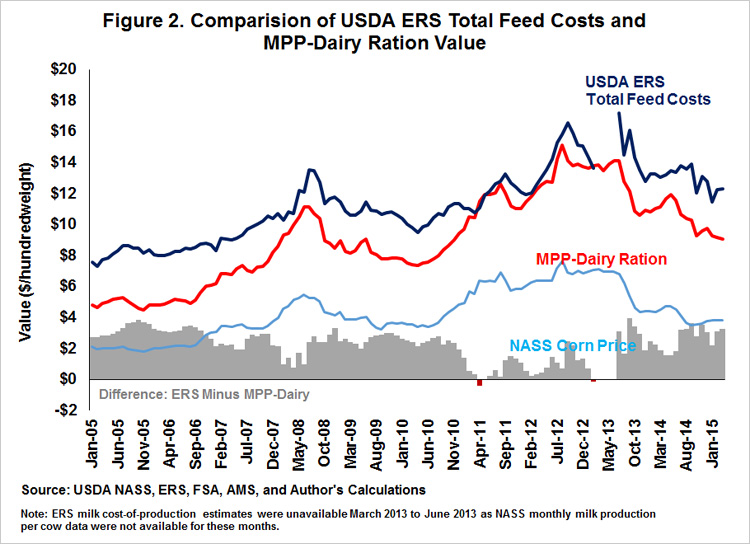 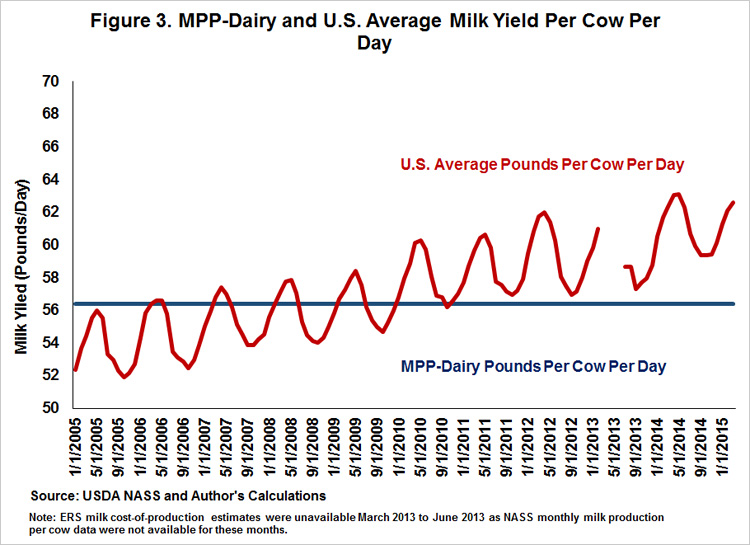 ERS takes into consideration animal productivity and seasonal changes in milk production to adjust the total feed costs. However, by capturing seasonal changes in the estimate of total feed costs, month-to-month differences between the two series can often be significant. For example, as demonstrated in Figure 4, when milk production per cow increases the difference between the two price series decreases. Then, when milk per cow is seasonally low the difference between ERS and MPP-Dairy feed rations increases substantially. 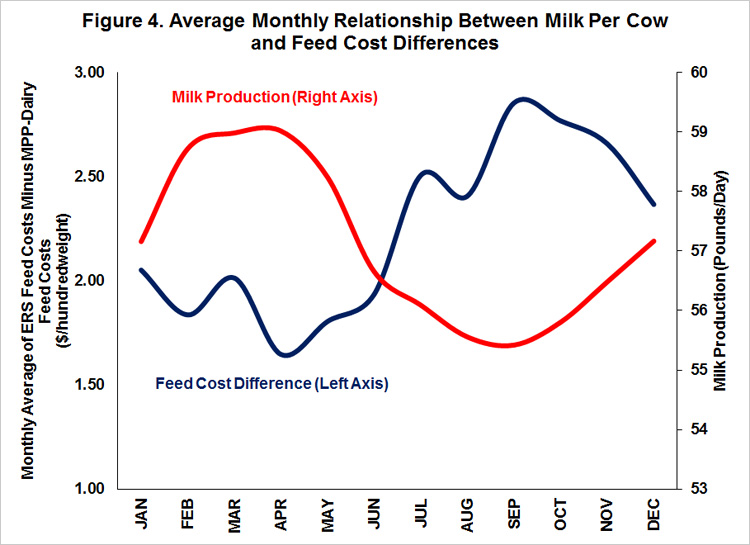 Additionally, the magnitude of the differences between ERS and MPP-Dairy feed costs has led to concerns that MPP-Dairy does not fully cover dairy feed costs. Depending on farm management style, animal productivity, and regional basis in feed costs this may in fact be true. MPP-Dairy was not designed to reflect farm-level costs of production. Instead, MPP-Dairy is a financial loss management program which provides assistance to dairy farmers when the national measure of farm income falls below a farmer-selected threshold. For dairies with high purchased feed costs or lower animal productivity MPP-Dairy may not fully cover the costs of producing 100 pounds of milk. On the other hand, for dairies with low purchased feed costs or higher animal productivity, MPP-Dairy may cover more than 100 percent of the feed costs for milk covered in the program (farmdoc daily, September 26, 2014). In any case, no matter what the farm-level costs of production may be, MPP-Dairy can be used to limit downside income risk.

For those farms with feed costs greater than those protected under MPP-Dairy it is important to consider that similar to other Title I commodity programs MPP-Dairy offers partial safety net protection. MPP-Dairy offers margin protection up to $8 per hundredweight. The average MPP-Dairy margin from 2000 to 2015 was $8.58 per hundredweight. Thus, MPP-Dairy offers safety net protection on as much as 93 percent of the historical U.S. average margin and can cover up to 90 percent of a farm’s milk production history. This level of protection exceeds those found under other safety net programs. For example, field crop farmers enrolled in Agricultural Risk Coverage may only receive safety net protection on up to 10 percent of the benchmark revenue guarantee (farmdoc daily, March 18, 2015). Then, unlike MPP-Dairy, farmers in other Title I commodity programs are subject to eligibility constraints such as payment limitations or means testing on income. For farms seeking additional risk protection, futures and options contracts or forward positions may be incorporated with USDA tools to better protect against unforeseen catastrophic declines in farm income.

Penn State Extension. 2014. "Getting a Handle on the Farm Bill and the Dairy Margin Protection Program." Released April 15, 2014, accessed May 29, 2015. http://extension.psu.edu/animals/dairy/news/2014/getting-a-handle-on-the-farm-bill-and-the-dairy-margin-protection-program

[1] The authors would like to thank USDA NASS and USDA ERS for helpful contributions to the research.