In a previous farmdoc daily article (farmdoc daily, May 8, 2015) we reviewed USDA’s Animal and Plant Health Inspection Service (APHIS) Update on Avian Influenza data with respect to USDA Census identified county-level poultry populations to provide perspective on the magnitude of the ongoing bird flu outbreak. At the time of that article, in early May, there were 133 confirmed cases representing 25.7 million birds affected in the U.S. A majority of the confirmed cases were in Upper Midwest states such as Iowa, Minnesota, and Wisconsin – predominant egg layer and turkey production regions.

Now, nearly one month later, the number of detections reported has grown to 207 across 15 states and has resulted in the depopulation of more than 45 million birds. USDA expects the total number of birds affected to reach 50 million at some point during the summer. In response to the bird flu outbreak USDA has obligated $130 million dollars in poultry indemnity payments and dispatched more than 1,200 personnel to assist in managing the outbreak (Vilsack, 2015).

Today’s article continues our analysis of the 2014-2015 bird flu outbreak by reviewing more recent APHIS statistics on bird flu confirmations. Then, to provide perspective on potential economic implications of the bird flu, we will review several key poultry supply and demand indicators such as slaughter volumes, inventory, prices, and export volume.

The Bird Flu is Slowing

Since December 2014, there have been 73 counties in the U.S. and two Canadian provinces with confirmed cased of the bird flu (APHIS, 2015; and Canadian Food Inspection Agency, 2015). The total number of U.S. birds affected stands at 45 million, and includes 37.5 million chickens and 7.4 million turkeys. Data suggests the outbreak has been heavily concentrated in the Upper Midwest along the Mississippi flyway. States hit hardest by the bird flu include Iowa with 29.2 million birds culled and Minnesota with 8.4 million birds culled. As evidenced in Figure 1, there have been no confirmations in Southern portions of the flyway which would suggest a risk to the broiler chicken population is imminent. Instead, based on geographic location, the outbreak appears isolated to the egg layer and turkey populations (farmdoc Daily, May 8, 2015). 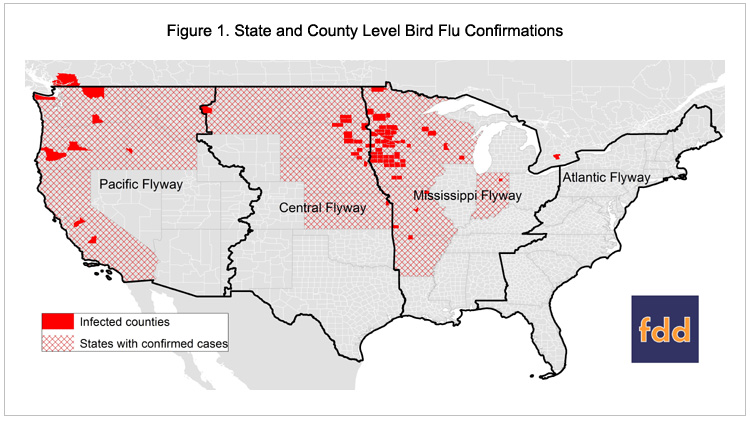 Figure 1 demonstrates that the counties with confirmed cases are clustered in the Upper Midwest spanning both the Mississippi and Central Flyways. A number of early and relatively isolated cases were also located in the Pacific Flyway. These early cases in the Pacific flyway occurred in December 2014 and did not spread to poultry operations in the Upper Midwest until April 2015, at which point the confirmation rate accelerated. The rate of bird flu infections was the highest in April for turkeys at 4.5 million birds infected, and was the highest in May for chickens with 25.6 million birds infected, Figure 2. 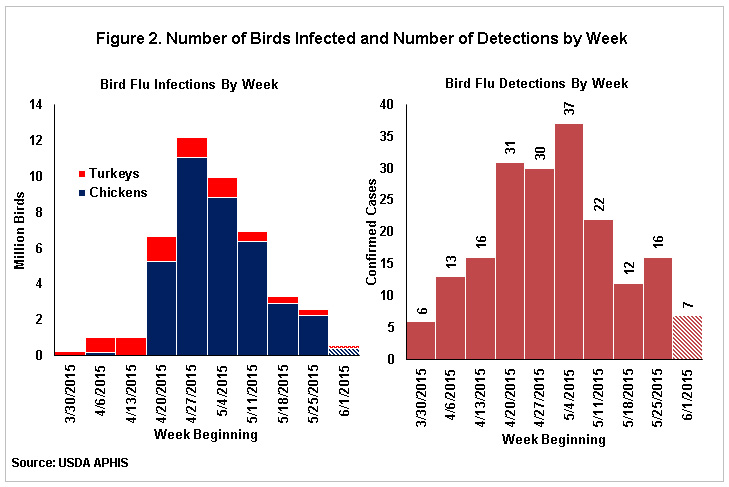 Based on recent data the pace of bird flu confirmations appears to have slowed significantly. APHIS data reveals that for the week beginning May 25th there were 16 detections and only 2.5 million birds affected, down 22 percent from the previous week. At the time of this article, for the week beginning June 1 there were 586 thousand birds affected and only 7 confirmed cases. In fact, for five consecutive weeks the total number of weekly bird flu confirmations has decreased from the late-April high of 12.2 million birds, Figure 2. This suggests that the infection rate of the bird flu is in fact slowing, yet the economic implications of this bird flu outbreak may last well into 2015 and early 2016.

The supply and demand implications of the bird flu can be observed through periodic USDA reports of poultry production, inventory, prices, and export volumes (USDA Poultry Fact Sheet, 2015). The current USDA reports cover poultry production and inventory through April 2015. Given that infection rate was the highest in April 2015 for turkeys, USDA data should provide early evidence on any potential supply disruptions with respect to turkey production and inventory.

First, USDA’s May 14 Turkey Hatchery report revealed that turkey eggs in incubators on May 1 were down 7 percent from the prior year. Additionally, placements during April 2015 were down 2 percent from April 2014. Slower placements are likely to reduce production in the near term. Reflecting this reality, and as a result of the bird flu, USDA’s May 18 Livestock, Dairy, and Poultry Outlook reduced turkey production by a combined 50 million pounds for the second and third quarter of 2015. However, following these reports, USDA’s May 27 Poultry Slaughter report indicated that turkey slaughter for January to April 2015 totaled 2.4 billion pounds and was up 7 percent from the same period in 2014. On the back of this strong start to the year, there is no reason to discount USDA’s forecast of total turkey production during 2015 at 5.979 billion pounds, 4 percent above 2014.

Much has been made of a potential supply disruption impacting the availability of turkeys during the Thanksgiving holiday. At this point in time data does not point toward a high likelihood of a turkey shortage during Thanksgiving 2015. To meet Thanksgiving demand turkey inventories are generally building from December to August. USDA’s May 22 Cold Storage Report revealed 394.4 million pounds of turkey in cold storage during April 2015, up 5.2 percent from April 2014. Importantly, whole turkey hens consumed during Thanksgiving were reported at 118.9 million pounds, up 13.1 percent from the prior year. Combined, these reports point toward the bird flu having only an isolated impact on turkey production during 2015.

The bird flu infection rate was the highest in May 2015 for chickens. As a result, May releases of USDA poultry reports that address April 2015 production are unlikely to provide much insight on supply disruptions in egg and layer categories. Early reports providing an estimate of potential supply disruptions include USDA’s May 18 Livestock, Dairy, and Poultry Outlook. In this most recent report, USDA reduced forecast egg production by 0.7 percent or 87 million dozen eggs for 2015. Confirming these expectations, the May 22 Chickens and Eggs report revealed early signs of decline with table egg production in Iowa, the state hardest hit by the bird flu, down 61 million eggs compared to April 2014. Additionally, for the U.S., table egg layers on hand on May 1, 2015 totaled 296 million birds, down 3 percent from the previous year. Given the magnitude of the bird flu outbreak in egg layers, it is anticipated that the June USDA updates will reveal additional declines in egg production.

In the meantime, egg prices offer clues on tightness in the supply and demand for shell and processed eggs. USDA’s June 3 Weekly Shell Egg Demand Indicator suggests that recent “supply-driven price advances” have resulted in light demand. As evidence of the price response to the bird flu Figure 3 shows weekly egg prices for Midwest Shell Eggs and Central States Breaking Stock. During May 2015, when the bird flu infection rate was the highest, breaker egg prices increased by 220 percent to over $2.00 per dozen. 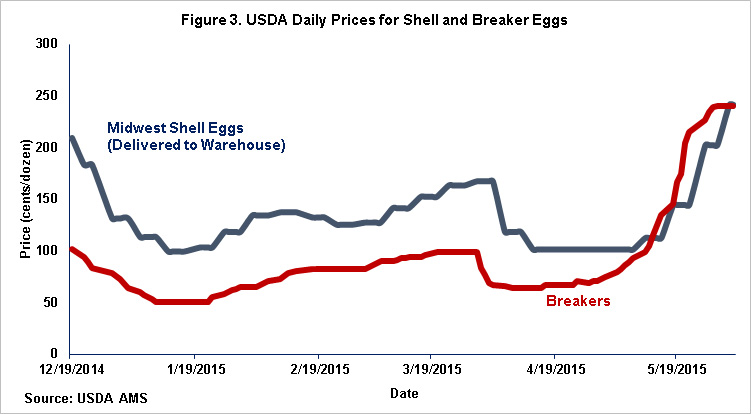 While poultry producers are dealing with farm-level supply disruptions, commodity-wide trade bans on poultry products could have longer lasting economic implications. USDA’s Food Safety and Inspection Service (FSIS) maintains an Export Library – Requirements by Country. A review of recently revised export requirements reveals at least 75 export partners have full or partial bans on poultry and poultry products produced in the U.S. Exports bans include ineligibility requirements based on county- or state-specific production locations as well as bans on all U.S. produced poultry. The effective date of the bans vary by country and range from as early as December 2014 to as recent as May 2015. These trade bans affect an estimated 233,770 poultry farms in the U.S. even if a bird flu infection was not confirmed at the poultry operation.

USDA Global Agricultural Trade System (GATS) Census data on poultry exports may be used to evaluate how poultry exports have changed as a result of the trade bans. GATS trade data through April 2015 reveals U.S. year-to-date poultry and poultry product exports to all partners at 1.242 million metric tons, down 7 percent from the same time period last year. Specifically, year-over-year declines of 8 percent, 6 percent, and 11 percent are observed for broiler meat, eggs and egg products, and turkey, respectively. It is reasonable to expect that a portion of the export decline witnessed is attributable to the bird flu. 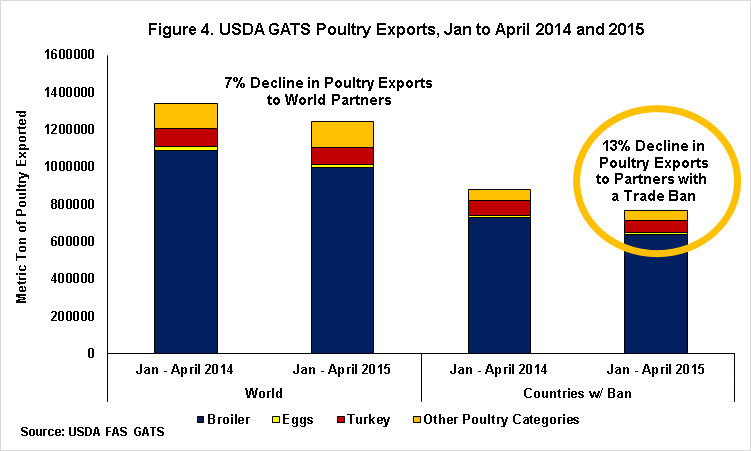 To some extent the loss of export markets in poultry was offset by additional exports to countries without an export ban. These countries imported 2 percent more poultry and poultry products during January to April 2015 than in the previous year. However, given that many export bans were effective beginning in May the potential exists for continued declines in U.S. poultry exports. Trade data through May will provide an updated perspective on the pace of poultry exports. Moreover, the duration of the trade ban will have longer lasting implication on U.S. poultry trade opportunities. With the potential for the bird flu to reemerge in the fall, trade complications could continue for the foreseeable future. Such a scenario could result in increasing cold storage levels and declining prices for some poultry parts.

Economically the bird flu impacts as many as 233 thousand poultry farms in the U.S. The ongoing avian influenza outbreak has resulted in the depopulation of more than 45 million birds. While recent USDA APHIS data reveals the infection rate is in fact slowing, concerns remain that the virus could reemerge as migratory birds move South during the fall and winter months.

Domestically, a portion of the bird flu focus has been on a potential shortage of turkeys during Thanksgiving. At this point in time turkey production and inventory values remain above prior year levels and do not support claims of a potential supply disruption. Instead, the impact of the bird flu is best revealed in egg prices. Driven by bird flu related supply shocks egg prices have more than doubled in recent weeks. As a principle ingredient in many finished and prepared food products, higher egg prices are not easily passed along to the consumer and may result in higher costs of production for many food processors and restaurants. However, given current egg and feed prices, and the reinstatement of the Netherlands as an importer, the egg supply is expected to quickly adjust through imports and domestic production.

Newton, J., and T. Kuethe. "An Outbreak unlike Any Other: Perspective on the 2014-2015 Avian Influenza." farmdoc daily (5):85, Department of Agricultural and Consumer Economics, University of Illinois at Urbana-Champaign, May 8, 2015.