In the farmdoc daily article of April 30, 2015, we examined the methodology and evaluated the accuracy of USDA’s World Agricultural Outlook Board (WAOB) corn yield forecasts over the period 1993-2014. That analysis was provided for background as the 2015 WAOB forecast cycle begins with the WASDE report to be released on May 12. Here, we repeat that analysis for soybeans. As with corn, WAOB soybean yield forecasts have been used in the May, June, and July WASDE reports since 1993 to make supply, ending stocks, and price projections for the upcoming marketing year. Previous research has shown that the release of these early projections–particularly in May–has a significant impact on prices in the soybean futures market (Isengildina-Massa et al., 2008). While it is clear that the WAOB yield forecasts are perceived by market participants as containing important new information, these forecasts appear to be poorly understood by many and often confused with later forecasts released by the National Agricultural Statistics Service (NASS) of the USDA. In this article, we demonstrate how the WAOB methodology for soybeans has changed over time and evaluate the historical accuracy of the soybean yield forecasts. The analysis of forecast accuracy updates results published in an earlier research report on USDA forecasts and estimates (Irwin, Sanders, and Good, 2014). That evaluation was for the period 1993 through 2012. Here we extend the analysis for soybeans through the 2014 crop year. 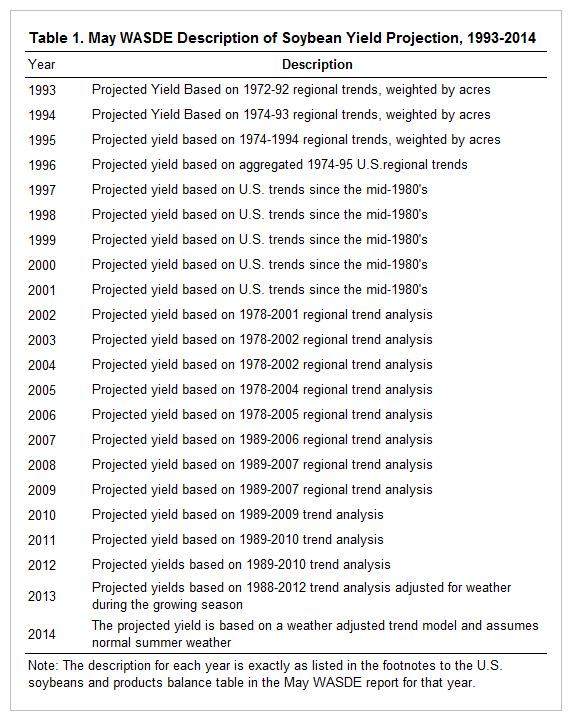 While some change in procedures over time is to be expected, similar to corn, WAOB soybean yield forecasting procedures have been surprisingly variable. The interesting empirical question is whether the changes had much impact on the WAOB yield forecasts. We present evidence on this point in Figure 1, which shows the history of May U.S. soybean yield forecasts from the WAOB over 1993-2014. The dominance of using a linear trend of historical yields for making the projection for the current year is reflected in the generally steady increase in the yield projection over the entire time period. However, there are three distinct “steady state” periods in the yield forecasts. From 1994 through 1998, May yield forecasts increased about one bushel per year, but were in a very flat pattern from 1998 through 2005 when forecasts ranged from 39.5 to 40 bushels. For the period 2006 through 2014, the yield forecasts increased by an average of 0.52 bushels per year, with a linear trend explaining 99 percent of the annual variation in the forecasts. It is also interesting to contrast the relatively smooth pattern in May soybean yield forecasts over 2010-2014 with the variability in May corn yield forecasts over the same period. The May 2010 WAOB forecast of corn yield, 165.3 bushels, jumped 8.1 bushels over the 2009 forecast and this variability continued through 2014 (farmdoc daily, April 30, 2015). 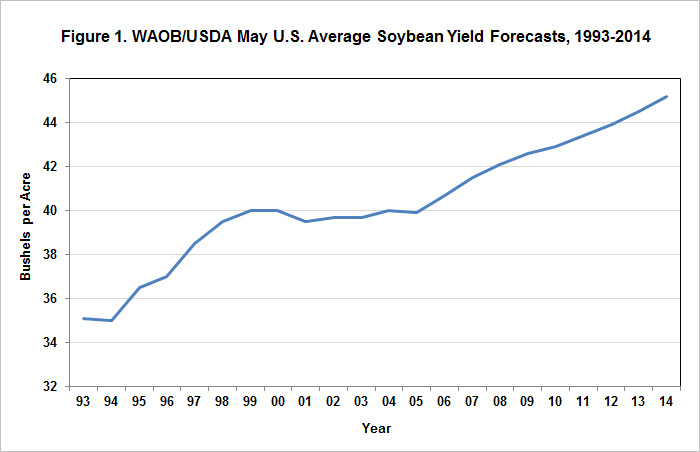 The changes through time in WAOB soybean yield forecasts for the U.S are not necessarily problematic if the methodology used to generate the forecasts is transparent and easily replicable. It would seem that a methodology limited to fitting a linear trend over average yields in a specific previous period should be transparent and easily replicated. Yet, the switching from regional to national trend analysis, the ambiguity of the sample period used for the analysis from 1997 through 2001, and the application of a weather model make forecasts less than fully transparent and more difficult to replicate. We do note that the WAOB published a report in 2013 that presented the crop weather model used to generate forecasts in 2014 (Westcott and Jewison, 2013). However, the WAOB has not published the data used to estimate the crop weather models nor the exact steps detailing how published forecasts are generated.

To evaluate the historic accuracy of the WAOB soybean yield forecasts, the May, June, and July forecasts are compared to the “final” yield estimate released in January after harvest (we say “final” because January estimates are sometimes revised a year later or even later based on the Agricultural Census conducted every five years). The differences between the forecasts and the final estimates in percentages over 1993-2014 are presented in Figures 2 through 4. When interpreting the errors as indicated by the bars, note that a positive error implies an under-estimate on the part of WAOB and a negative error implies an over-estimate. The absolute size of the errors is also represented by the lines in each graph. As expected, forecast errors were occasionally very large and the magnitude of the most extreme over-estimate exceeded the magnitude of the most extreme under-estimate. Unexpectedly, the frequency of over-estimates exceeded the frequency of under-estimates in all three months. The two largest forecast errors occurred in 1994 and 2003 and are readily explained by unusually favorable growing conditions in 1994 and a widespread outbreak of soybean aphids in 2003. 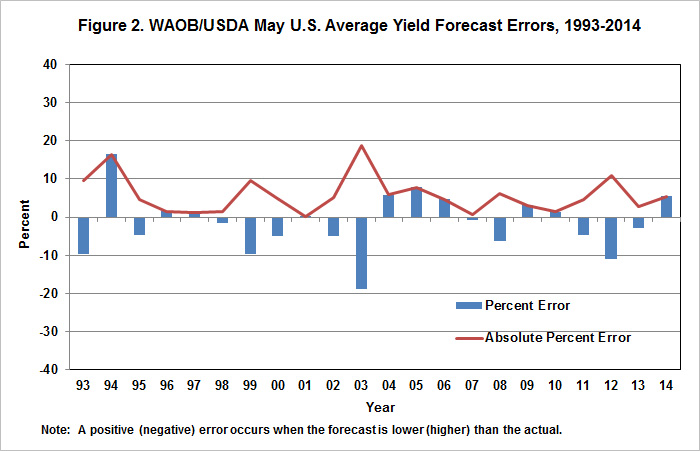 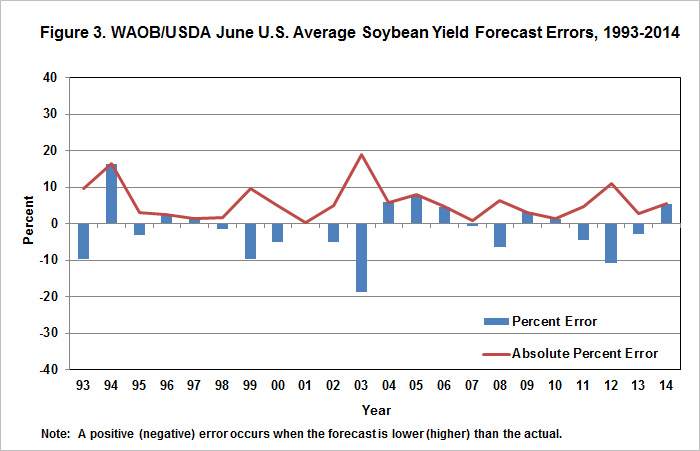 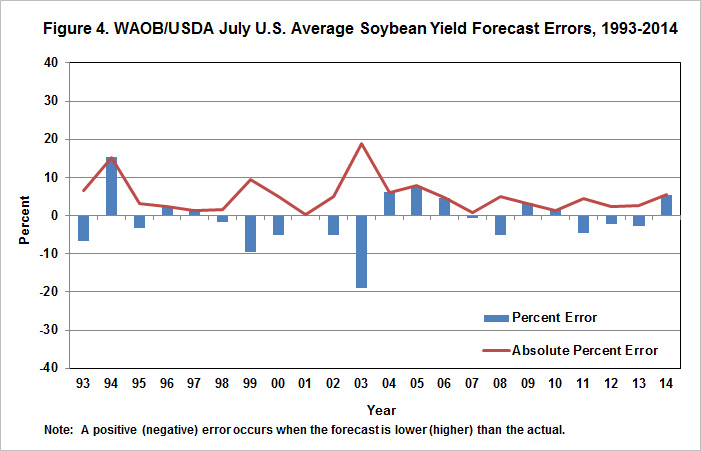 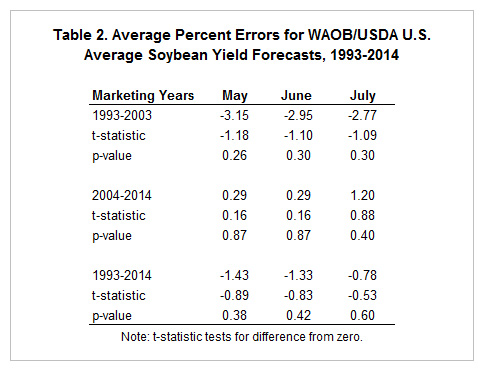 where Trendt is a time trend variable for crop year t that takes a value of 1 in 1993, 2 in 1994, and so on and et is a standard, normal error term. The estimated trend coefficients are negative for all three forecast months, which is consistent with the smaller average errors in the latter sub-sample. The trend coefficients, however, are not statistically different from zero. So, while the errors have gotten smaller, the decline may just be due to chance and random variation within the sample. 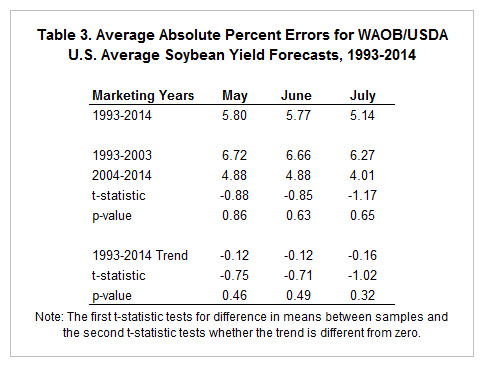 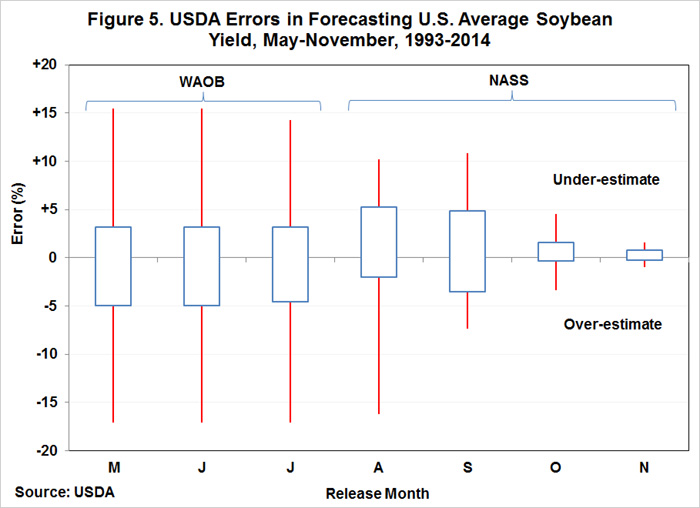 Several interesting observations can be made based on Figure 5. First, the distribution of errors is remarkably similar for May, June, and July. This reflects the fact that in most years over 1993-2014 only minimal adjustments were made to WAOB forecasts after May. Second, the boxes reveal that WAOB soybean yield forecasts tended towards over-estimation (consistent with the results presented earlier in Table 2), while NASS forecasts tended towards under-estimation, just the opposite directional bias. The downward bias in NASS forecasts is largest in August. We reported in this earlier farmdoc daily article (September 4, 2014) that the downward bias in NASS soybean yield forecasts over 1990-2013 was statistically significant in September, October, and November and was larger in the second half of the sample compared to the first half in all four release months. The magnitude of the bias in August and September over 2002-2013 was on the order of one bushel, again, a non-negligible amount. Third, the magnitude of the extreme over-estimate (bottom whisker) by the NASS August forecast was not smaller than the extreme over-estimate by the WAOB July forecast. Both extremes occurred in 2003. Fourth, the magnitude of the middle 50 percent of the range of WAOB and NASS forecast errors is almost equal from May through September. In fact, the middle 50 percent range for the September NASS forecast is slightly larger than the range for the other four months. This is surprising given the more advanced stage of the soybean crop.

The USDA’s World Agricultural Outlook Board (WAOB) provides one of the key early assessments of prospects for the U.S. average soybean yield. WAOB forecasts of the national soybean yield are released in May, June, and July and are based on relatively simple trend analysis of historical yields (trend modified by weather considerations in 2013 and 2014). Despite the simplicity, WAOB soybean yield forecasting procedures have been surprisingly variable over time. The changing procedures generated three distinctive periods of yield forecasts–relatively steep annual increases from 1994 to 1998, a very flat pattern from 1998 through 2005, and modest annual increases from 2006 forward. Our analysis of WAOB May, June, and July yield forecasts for soybeans over 1993-2014 showed that forecast errors were occasionally very large and the magnitude of the one extreme over-estimate exceeded the magnitude of the one extreme under-estimate. Surprisingly, the frequency of over-estimates exceeded the frequency of under-estimates in all three months. The two largest forecast errors occurred in 1994 and 2003 and are readily explained by the unusually favorable growing conditions in 1994 and a widespread outbreak of soybean aphids in 2003. Forecast error trend results suggest that observed improvements in forecast accuracy over time are not statistically significant.

In sum, while there are no glaring problems with the accuracy of WAOB soybean yield forecasts, the forecasts have been subject to criticism from time-to-time. Some of the criticism probably reflects a lack of understanding of the forecasting methodology. In particular, some market participants appear to be unaware of the difference between the WAOB and NASS forecasting methodologies. Additional criticism may stem from WAOB changes in methodology, changing periods for calculating trend, or lack of sensitivity to other potential yield indicators such as crop conditions. It is not unreasonable to anticipate that this changing menu of forecasting methods creates some confusion on the part of market participants. It would be very helpful if the WAOB made all data used in estimating yield models available to the public and produced a written document that outlines the exact process used to determine forecasts, including the roles of crop weather regression forecasts, subjective judgment, and any other inputs. This would go a long ways towards reducing confusion about WAOB yield forecasting methods and improving the transparency of these important forecasts to market participants.