This article extends the discussion of crop program decisions by U.S. farmland owners and farmers in the June 16, 2015 farmdoc daily article). Program decision data are from the U.S. Department of Agriculture (USDA), Farm Service Agency. Crop year price and planted acres from the USDA, National Agricultural Statistics Service QuickStats website are also used in the article.

When examining farm policy, it is important to consider multiple dimensions, including farm, acre, crop, and state dimensions. Tuesday’s article underscored that 76% of program base acres were elected into the Agriculture Risk Coverage – County Option (ARC-CO). While this share is important, it is also important to note that it is heavily influenced by corn and soybeans, which have the largest and third largest program acreage. ARC-CO was elected on 93% of corn acres and 97% of soybean acres. A somewhat different view emerges if you look at the other 20 program crops. Across these crops as a group, ARC-CO still accounts for a majority of base acres, but it is 57%, not 76%. Moreover, over 80% of base acres in sesame, canola, peanuts, long grain rice, and medium grain rice were elected into PLC (the Price Loss Coverage program). Thus, PLC garnered large support for some crops and notable support in many other crops. On the other hand, election of ARC-IC (ARC individual option) was minimal for all crops. Only for large chickpeas (11%) and small chickpeas (9%) did it approach double digits. For 13 of the 22 program crops, ARC-IC’s share was less than 2% of the crop’s base acres, including corn, soybeans, and wheat.

An oft-heard comment is that farmers would elect the program expected to pay the most in 2014, especially given that reference prices were raised differentially across crops relative both to their current market prices and 2008 farm bill target prices. Moreover, economics and discussions with farmers clearly indicate expected payment is a consideration. As expected, the share of a crop’s base acres elected into PLC and the crop’s ratio of its PLC reference price to the Olympic average of its 2009-2013 crop year prices is positive (see Figure 1). The ratio is a ratio of payment-related prices for PLC and ARC-CO and thus an indicator of the chances of payment by PLC relative to ARC-CO. However, perhaps surprisingly, the relative payment indicator explains only 35% of the variation across crops in PLC’s share of a crop’s base acres (see Figure 1). This simple analysis, which needs to be confirmed by more in-depth analysis, suggests that, while potential expected payments is a significant explanatory variable, program choice involved more than the potential payments expected early in the 2014 farm bill period.

Program Base Acres by Crop

Corn has the largest increase in base acres (+12.8 million); wheat has the largest decline (-9.9 million) (see Figure 2). Other crops with a 1 million plus change in base acres are soybeans (+4.7 million), barley (-3.5 million) and grain sorghum (-2.6 million). Corn base acres increased in 41 of the continental U.S. states. Corn now has the largest base acres in 27 states. Iowa, Minnesota, Nebraska, Illinois, South Dakota, Kansas, and North Dakota account for 75% of the net increase in corn base acres. In contrast, wheat base acres declined in all but 6 of the continental U.S. states. Million acre plus declines in wheat base occurred in Minnesota, Kansas, and South Dakota. Soybean base acres declined by over half a million each in Illinois and Iowa but increased by 1.1 million and 2.8 million, respectively, in Kansas and North Dakota. Because of their large base acres, percent change in corn, soybean, and wheat base acres is more muted (see Figure 3). Percent change tends to be larger for crops with smaller base acres, although barley and sorghum are not relatively small base acre crops and their percent decline is the second and fourth largest, -41% and -23%, respectively. 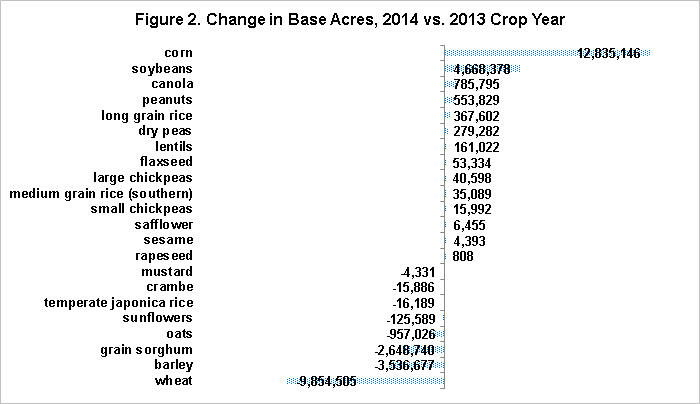 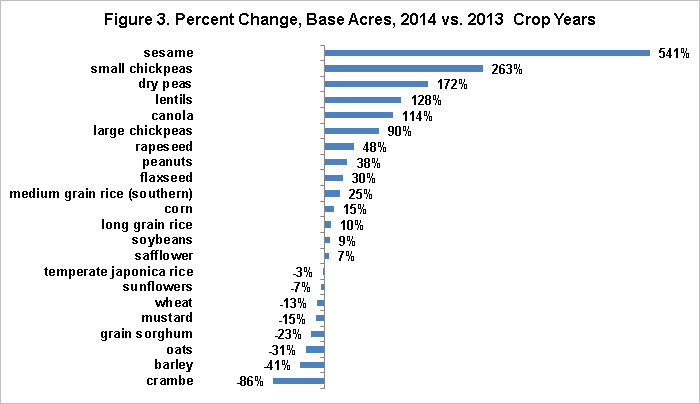 As expected, a key factor associated with changes in base acres is historical trends in planted acres. Figure 4 presents the relationship between change in a crop’s base acres resulting from 2014 farm bill decisions and difference between average acres planted in 2009-2012 and base acres for 2013. The difference explains 52% of the changes in crop base acres resulting from 2014 farm bill decisions. Its explanatory power increases to 84% if corn, soybeans, and wheat are removed. However, on average, farmers updated base acres by only about one third of the difference between 2009-2012 planted acres and 2013 base acres (regression slope coefficient is +0.37 – see Figure 4). Thus, as a group, farmers only partially adjusted base acres to reflect past trends in planted acres.