Grain farms are projected to have lower farm incomes over the next several years than in 2010, 2011, and 2012. Lower incomes then will require many farmers to lower capital purchases more than they did in 2014.

Figure 1 shows average capital purchases on northern Illinois farms enrolled in Illinois Farm Business Farm Management (FBFM). These values are averaged over many grain farms and are stated on a per acre basis. Capital purchases relate to items with lives longer than one-year including machinery, tile and many other drainage improvements, buildings, and grain storage. Per acre values in Figure 1 are for northern Illinois. Similar trends exist in central and southern Illinois. 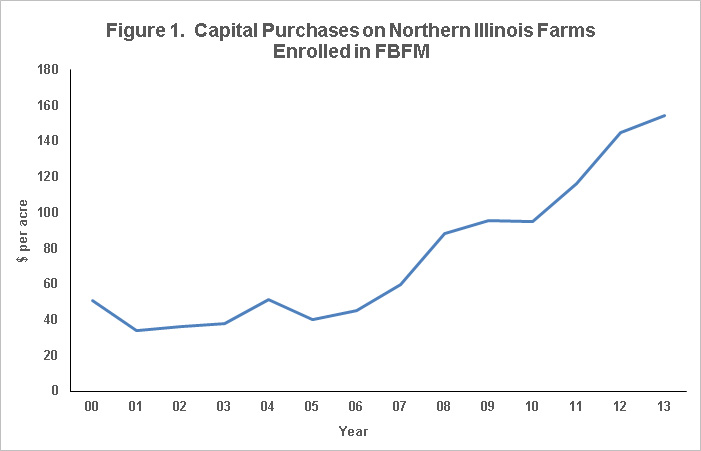 In many cases, the higher capital purchases from 2010 through 2013 were prudent. Farmers had higher incomes and reinvested funds in their farming businesses. This reinvestment came after a relatively long period of lower investments stretch from the late 1990s through 2005. Furthermore, income tax policies encouraged capital purchases.

Farm equipment sales, which make a large share of capital purchases, were reported down in 2014. However, the decrease was not of a 72% magnitude (see here for a discussion of 2014 machinery sale). Therefore, further decreases are likely in 2015.