The U.S. Department of Agriculture, Farm Service Agency (USDA, FSA) recently released enrollment data on commodity program choices made under the 2014 Farm Bill. This article summarizes how farmers split program acres between Agricultural Risk Coverage – County Option (ARC-CO), ARC – Individual Option (ARC-IC), and Price Loss Coverage (PLC). Overall, ARC-CO was the overwhelming choice. ARC-CO was elected on 76% of program acres. PLC was next with 23% of acres, followed by ARC-IC with less than 1% of acres. There were differences in program choices across crops, as discussed below.

Farmers choose ARC-CO for 97% of soybean base acres and 94% for corn base acres (see Figure 1). Analysis indicated that expected payment from ARC-CO were larger than from PLC for both corn and soybeans (see farmdoc daily January 27, 2015 for more detail), suggesting high use of ARC-CO. However, the fact that ARC-CO accounted for over 90% of program acres for both corn and soybeans is astonishing. The large share suggests: 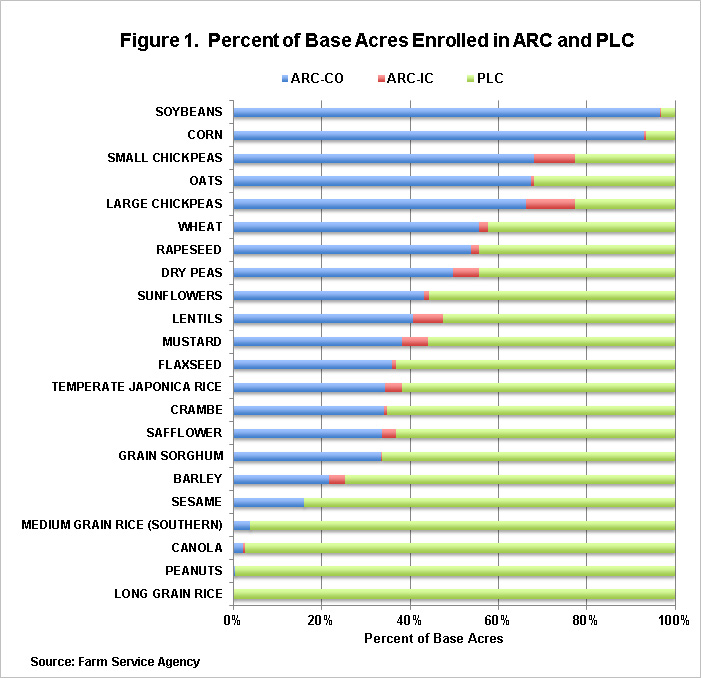 At the other end of the spectrum, near 100% of peanut and long grain rice base acres were enrolled in PLC (see Figure 1). These large percentages are not a surprise as studies suggested that PLC would make larger payments than ARC-CO for these crops (see farmdoc daily January 27, 2015 for more detail). Reference prices for these crops are well above market-level prices, leading peanuts and rice farmers to overwhelmingly choose PLC.

Perhaps the surprise in rice is the fact that ARC-CO was elected for a relatively high percentage of acres for Japonica rice. ARC-CO was selected on 34% of acres, ARC-IC was selected on 4%, and PLC for 62%. Note that yield and price dynamics are different for japonica rice than for long grain prices and Japonica’s reference price was set at 115% of the long and medium grain reference price. Also, all Japonica rice base acres are located in California, and the drought situation may be playing a role in program choice.

Wheat choices were split relatively evenly between ARC and PLC (see Figure 1). ARC-CO was used on 56% of base cases, ARC-IC on 2%, and PLC on 42%. Studies of expected payments suggested that ARC-CO and PLC were near one another, potentially leading to the relatively even split.

Overall there was a geographical pattern to program choice, as would be indicated by signup by crop. Figure 2 shows states giving percentages of base acres enrolled in PLC. In general, PLC was used more in states in the south and west. Highest PLC use occurred in Arizona (95% of program acres), New Mexico (87%), Texas (84%), and Utah (82%). PLC use in Corn-Belt states were small. For example, PLC was used on 2% of program acres in Iowa, 3% in Illinois, and 2% in Indiana. 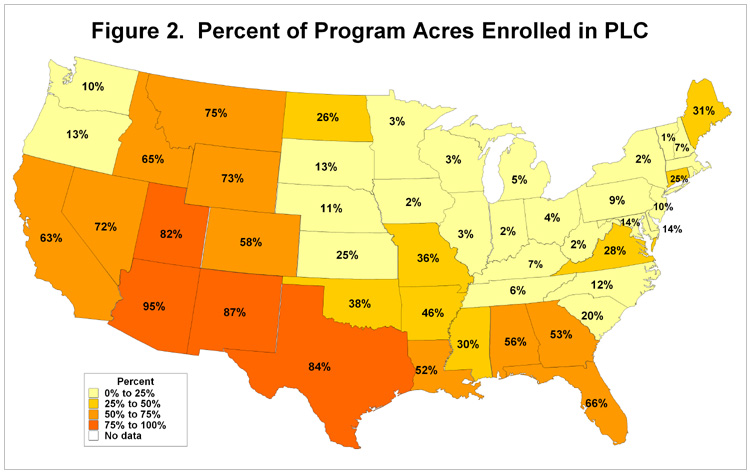 To a large extent, program choices followed predictions made prior to sign-up. Two facts, however, stand out. First, ARC-CO was the overwhelming program choice across program crops, particularly on corn and soybean acres. This suggests that farmers will use revenue-based programs, particularly those of relatively straight-forward design. The second was the relatively small use of ARC-IC. While ARC-IC has the desirable feature that it protects farm yields, ARC-IC also is a more complicated program relative to ARC-CO and PLC, combining all crops when determining payments and requiring farmers to report yields to be FSA. These complications may result in its unpopularity.