As the name indicates, TAS allows futures traders to receive the daily settlement (closing) price. This feature is attractive to fund managers and other investors, where filling a large number of contracts at the same price can be important for valuation purposes. It also may be useful to commercial users in certain situations.

Buyers place bids (quantities and prices at which they are willing to buy) and sellers place offers (quantities and prices at which they are willing to sell). Like other types of orders, TAS orders can be placed and cancelled throughout the trading session. Bids and offers for each TAS value (in ticks) are entered into a separate order book and matched at the end of the trading session. If there is no corresponding bid or offer for a particular value, the TAS order is not filled. Agreeing to accept a price a few ticks above (for a buyer) or below (for a seller) the eventual settlement price may provide an incentive for someone to take the other side of the trade.

TAS in Other Markets

TAS was first introduced in August 2006 for certain energy products. Since that time it has been extended to other markets, including precious metals. In the agricultural markets, TAS replaces the “market on close” (MOC) order type, which has not been available since the futures pits closed on July 2. MOC could be executed only on the trading floor and only during the closing period, and provided the trader with a fill price somewhere in the closing range. While it might seem that TAS provides greater certainty than MOC because the trader selects the number of ticks, keep in mind that the settlement price is unknown beforehand, and consequently the actual price obtained through TAS is also unknown.

Over the years, TAS has been associated with several efforts to artificially influence the daily settlement price through “banging the close” and other forms of manipulation, detailed here, here, here, and here.

To prevent these abuses from happening in the ag markets, TAS is available only in the most liquid commodities, and only in the most liquid contract months: the front three months in grains and the front two months in livestock (except May lean hogs), and not during delivery periods. In addition, the exchange announced that “All market participants are reminded that any trading activity that is intended to disrupt orderly trading or to manipulate or attempt to manipulate a settlement price to benefit a TAS position will subject the member and/or the market participant to disciplinary action.”

Some energy market participants claim that TAS has adversely affected futures market performance. In their view, liquidity is reduced because TAS trades are not available (like a market order would be) to offset regular trades, and price discovery is reduced because TAS trades are simply assigned a price without having to compete (like a limit or “price” order would) for a price in the open market.

To examine the extent of TAS trading in the energy markets, and to determine how rapidly TAS has been adopted in the agricultural markets, we will examine TAS volumes in both the energy and agricultural markets for the one-month period June 15 (the first day of agricultural TAS) through July 14. This comparison will use the most actively traded futures contracts in each market segment: crude oil, heating oil, gasoline, and natural gas in energy, and corn, soybeans, Chicago wheat, live cattle, and lean hogs in agriculture.

For actively-traded energy contracts, TAS is available in the first four contract months, but is not available on the last day of trading in an expiring contract month. Instead, a new contract month becomes TAS-eligible on that date. To reflect the relative importance of TAS for each market, TAS volume is expressed as a percent of total volume for all TAS-eligible months combined.

Figure 1 shows that for the energy commodities, TAS activity varies widely day-to-day for individual contract months and for all TAS-eligible months combined. TAS activity tends to be highest for heating oil and gasoline, and lowest for natural gas, with crude oil somewhere in-between. TAS volumes can be quite high on certain days – for example, TAS accounted for 15% of the total volume in the four front months combined for gasoline on June 25. 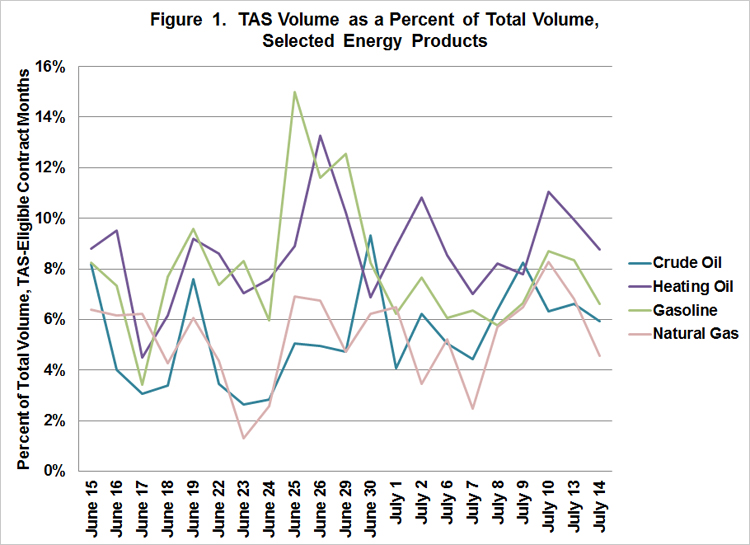 For agricultural contracts, TAS is available in the first three contract months in grains and oilseeds, and the first two contract months in livestock, but is not available in the front month during the delivery month or the last business day preceding the delivery month. Instead, a new contract month becomes TAS-eligible on that date. To reflect the relative importance of TAS for each market, TAS volume is expressed as a percent of total volume for all TAS-eligible months combined.

Figure 2 shows that for the agricultural commodities, TAS activity generally has been quite low, as would be expected during the first month of availability. Although the levels of activity appear to be more stable in agriculture than in energy, this may be due to the lower overall levels of TAS activity for agriculture, which would tend to mask day-to-day variations. Soybeans have had the least amount of TAS activity, with no TAS trades in at least one contract month on 12 of the 21 days. Corn and Chicago wheat have had only slightly more TAS activity. At the other end of the spectrum, lean hogs have had the most TAS activity, followed by live cattle. TAS accounted for more than 8% of the total volume in the two front months of lean hogs on two days during the first month of availability. 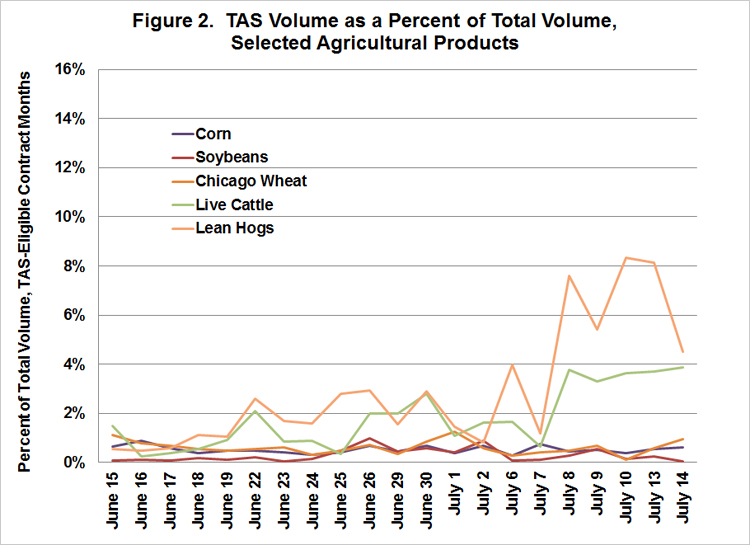 It will be interesting to follow the development of TAS in the agricultural markets. Early results suggest that livestock may follow a different path than grains and oilseeds, and it remains to be seen whether agricultural TAS volumes achieve similar levels as those in the energy markets.