Market gyrations in recent weeks have driven down prices for many traditional investments as well as most commodities. In previous times of market chaos, stock market investors have been advised not to panic, but to sit tight and wait for prices to recover. This advice has proven to be quite prudent as values have bounced back – sometimes quickly – after each market crash over the past 30 years.

Does this same advice also apply to agricultural commodities? More specifically, using corn as an example, how long does it typically take for prices to recover to their pre-crash levels following a price decline? The answer can be important because current price levels often influence future production and investment decisions.

Notice that we do not assume a farmer stored corn in a particular year and held it until it could be sold at a profit. There are no storage or interest components in these comparisons – we simply compare the season average prices for different years. We also do not make any adjustments for inflation; all prices are in non-inflation-adjusted terms.

The 1866-1947 subperiod contains 82 marketing seasons, which allows us to make 81 year-to-year price comparisons. Within these 81 comparisons there were 42 year-to-year price increases, and 39 year-to-year price declines. For the 39 declines, the average time required for prices to recover was 9.0 years, but the individual times varied widely. Recovery times are shown in Figure 1, and are summarized in Table 1. In more than one-third (15 out of 39) of the cases, prices had recovered by the second year, and in nearly one-half (19 out of 39) prices had recovered by the third year. But for more than 20% (8 out of 39) of the price declines it required longer than 10 years for prices to recover. The longest recovery, from 1867, required 49 years before the season average price returned to its original level of 78.1 cents. Results for the 1869 crop were only slightly better, with a recovery time of 47 years. 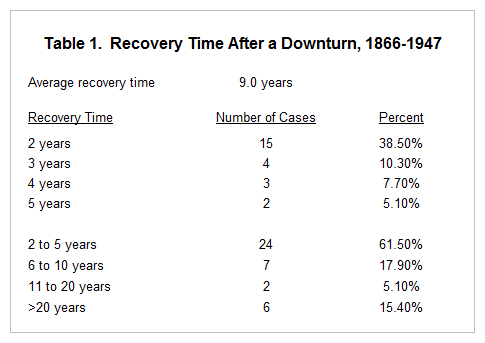 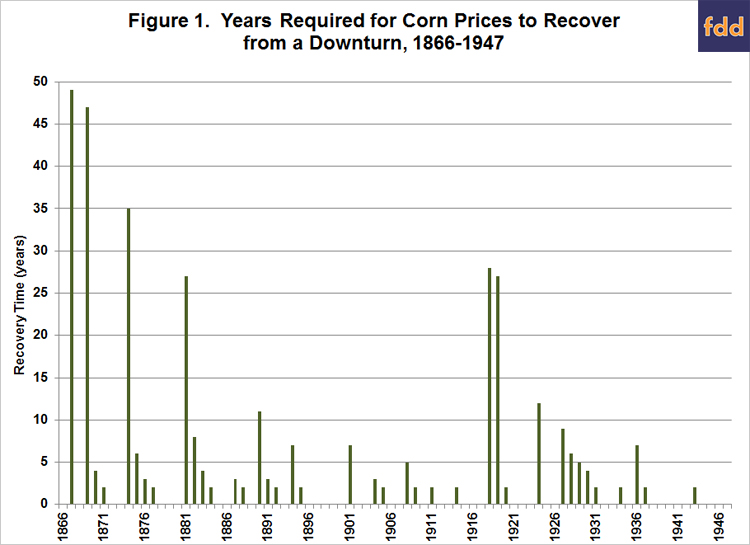 Season average prices and average yields for the 1866-1947 subperiod are presented in Figure 2. Yields (red line) were relatively flat, but the price impact (blue line) of year-to-year yield variations – price dips in years with higher yields and price spikes in years with lower yields – is readily apparent, particularly in the early years. However, the largest price changes were driven by external factors: World War I in the 1910s, the economic boom in the 1920s, the Great Depression in the 1930s, and World War II in the 1940s. This chart graphically illustrates the shift from a largely domestic-based corn market and an economy largely insulated from the rest of the world, to the beginnings of an export-oriented corn market and an economy influenced by global affairs. 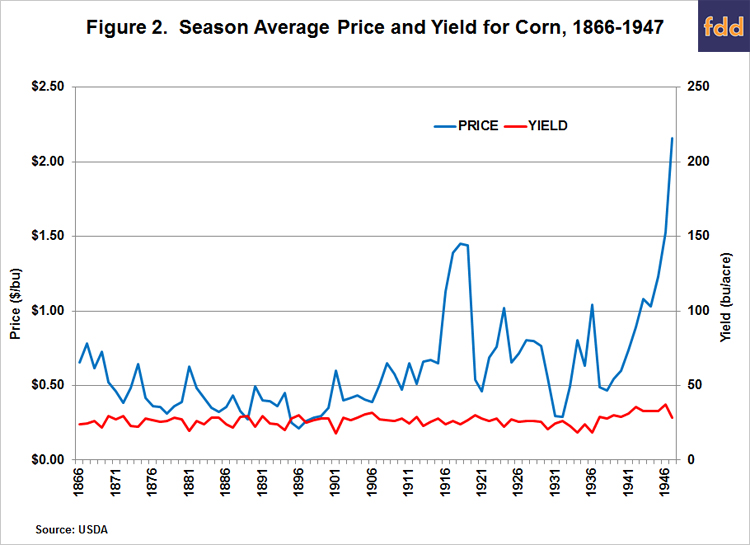 The 1948-2014 subperiod contains 67 marketing seasons, which allows us to make 66 year-to-year price comparisons. Within these 66 comparisons there were 33 year-to-year price increases, and 33 year-to-year price declines; of the 33 declines, 31 have recovered. For the 31 declines with recoveries, the average time required for prices to recover was 7.4 years. Recovery times are shown in Figure 3, and are summarized in Table 2. In nearly one-third (9 out of 31) of the cases, prices had recovered by the second year, and nearly one-half (16 out of 31) prices had recovered by the fourth year. But more than one-fourth (8 out of 31) required between 11 and 20 years to recover, and the longest (from 1951) required 22 years. In addition, there are two years – 2012 and 2013 – which have not yet recovered to their previous levels of $6.89 and $4.46, respectively. We cannot yet make a determination for 2014 because the 2015 marketing year is just getting underway. 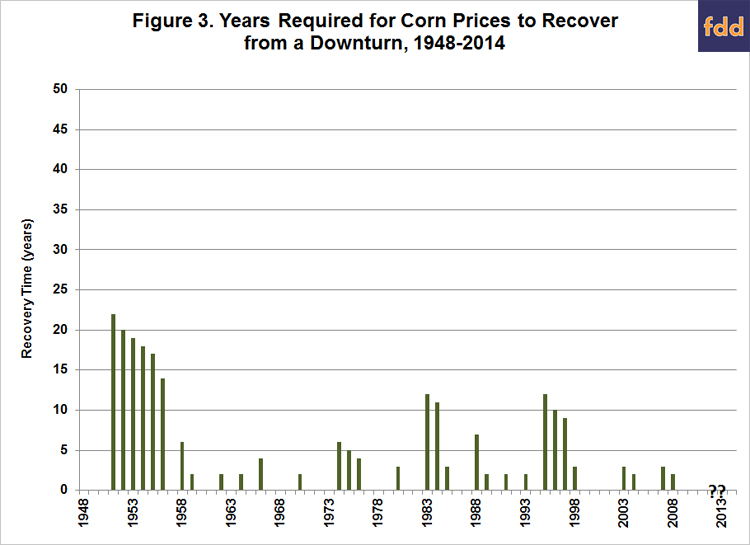 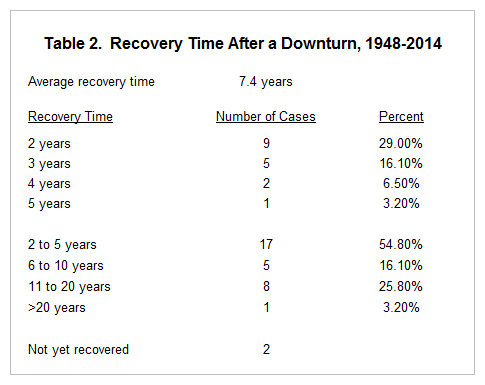 Season average prices and average yields for the 1948-2014 subperiod are presented in Figure 4. In contrast to the earlier subperiod, yields (red line) have trended steadily higher due to advances in technology, but the impact of year-to-year yield variations on prices (blue line) is still apparent. But much like the earlier subperiod, the largest price changes were driven by external factors, beginning with the export boom of the 1970s. Since that time prices have been much more volatile, with large year-to-year moves in both directions. 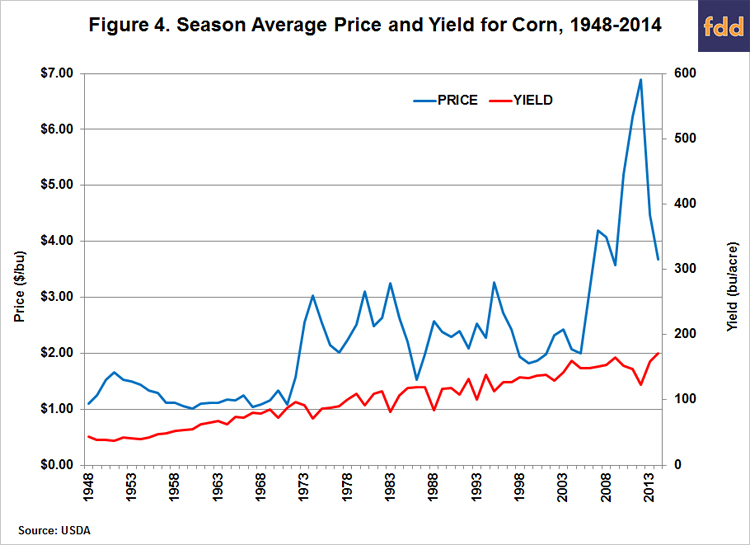 While the two subperiods have some important differences, the results were remarkably similar and allow us to draw some general conclusions about price behavior in the corn market over the past 148 years. Prices have always recovered from a downturn, and while past results may not be a reliable predictor of future performance, it seems likely that corn prices eventually will return to the high $6 area last seen with the 2012 crop.

But if you take this view, then you must also recognize that for the other half of the previous downturns – the losing side of this 50:50 coin toss – the recovery took longer than 5 years. Often it took much longer, as in the 1860s (nearly 50 years), or the 1950s (14 to 22 years for the 1951-56 crops), or as recently as the 1990s (9 to 12 years for the 1995-97 crops). In addition, each of these longer recoveries, to what were then new record price levels, required a major event – a world war, a global crop failure, or the creation of an ethanol industry, respectively – to drive prices back up to their previous levels. These game-changing events are few and far between, and their timing is completely unpredictable.

The results presented here are consistent with those of two previous articles (farmdoc daily November 7, 2013; March 6, 2013) which showed how prices can remain below (or above) average for extended periods of time. USDA’s August WASDE report projected the price of the 2015 crop at $3.35-3.95, for a midpoint price of $3.65. It may be awhile before we see $5 or $6 corn again, so producers should avoid making long-term decisions based on overly optimistic price expectations.