Crude oil prices have once again been making headlines, dipping into the upper $30s and lower $40s per barrel. In an article last week (farmdoc daily, August 19, 2015), it was shown that real (inflation-adjusted) prices of crude of oil and gasoline have fallen back to levels prevailing more than a decade ago. It was further argued that if real prices continue near these levels, this would provide compelling evidence that the great “super-cycle” in crude oil prices that began in 2004-2005 was coming to a close. The purpose of today’s article is to analyze prospects for U.S. “pump” gasoline prices in the near-term given the recent slide in crude oil prices.

We begin by examining the relationship between crude oil prices and retail (pump) gasoline prices in the U.S. Figure 1 shows a scatter plot of monthly spot prices for Brent crude oil and monthly U.S. average prices for retail regular gasoline (conventional and reformulated) over January 2008-December 2014. Brent crude oil prices are considered because Brent prices have predicted U.S. gasoline prices better in recent years, as pointed out by Jim Hamilton (May 16, 2012, June 24, 2012; June 21, 2014) and others. The Brent crude oil price series is collected by the EIA and found here. The August 2015 Brent price is estimated based on the average of daily prices through August 24. Regular gasoline prices also are collected by the EIA and can be found here. The August 2015 gasoline price is estimated based on the average of the first four weekly prices in August. With an R2 of 0.92, the fit of the relationship is quite good. The coefficients also have a sensible interpretation. Since a barrel of crude oil contains 42 gallons, a logical slope is simply 1/42 or 0.024. The slope estimate in Figure 1, at 0.0241 is remarkably close to this predicted value. The intercept, 0.9013, estimates the national average of: i) state and federal gasoline taxes; ii) refinery margins, and iii) transportation other markup costs. 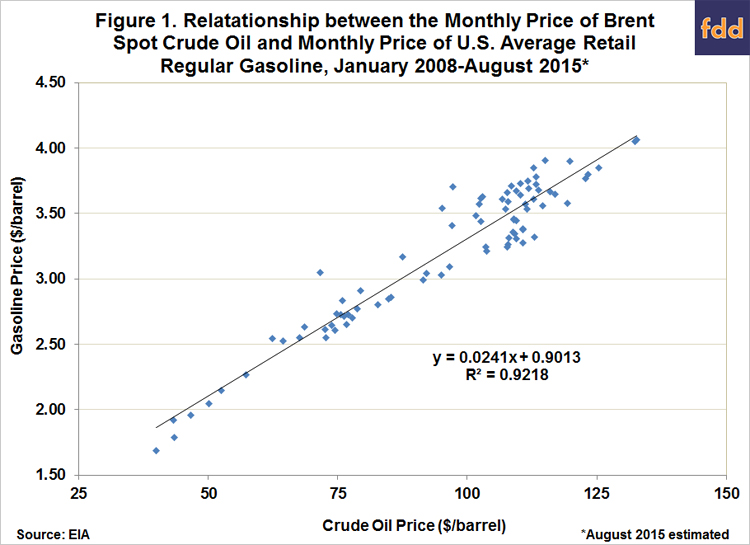 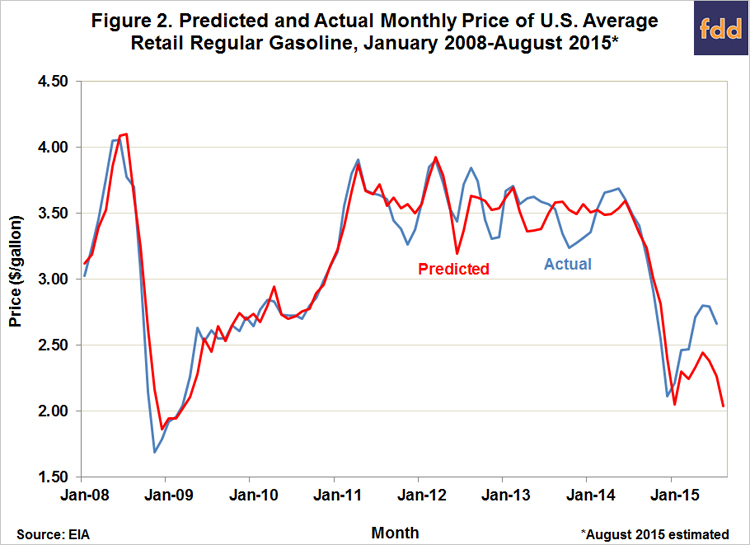 With Brent crude oil prices currently trading near $45 per barrel, the historical relationship between crude oil and gasoline prices indicates that the U.S. average gasoline price should be about $2.00 per gallon. Instead, gasoline prices at the pump have remained stubbornly above $2.60 per gallon. The gap between predicted and actual gasoline prices can be largely traced to the improving U.S. economy. As today’s upward revision of U.S. GDP growth for the second quarter of 2015 highlights, the U.S. economy, despite all the headwinds, is starting to grow more briskly. In combination with the sharp drop in crude oil prices, this has stimulated gasoline consumption, which in turn has pushed the production capacity of the U.S. refining industry. This has also been exacerbated by short-run closures of some refineries in 2015 for various reasons. The bottom-line is that gasoline prices are likely to remain at a premium to crude oil prices until the squeeze on refining capacity is eased. Some relief may be on the horizon as gasoline demand in the U.S. usually peaks in the summer.