After the EPA issued its long-awaited proposal for the 2014, 2015 and 2016 RFS mandates on May 29, 2015, the price of D4 biodiesel RINs increased slightly while the price of D6 ethanol RINs dropped precipitously (Figure 1). The relatively small increase in D4 prices after the announcement suggested that the biomass-based diesel mandates were largely as expected, but the sharp drop in D6 prices indicated that the ethanol mandates were smaller than many expected (farmdoc daily, June 3, 2015). After falling sharply in the days following the EPA announcement, D6 RINs prices have since generally traded in a sideways fashion. In contrast, after rising slightly in the days following the announcement, D4 RINs prices have declined at an ever increasing rate, to the point where D4 and D6 prices today differ by only a few cents. The behavior of D4 prices in recent weeks appears to be quite puzzling given the lack of additional important RFS announcements by the EPA. Furthermore, since the RINs price represents the marginal cost of complying with an RFS mandate, it is important to understand why any large change in the RINs price occurs. It turns out that the seemingly anomalous behavior of D4 biodiesel RINs prices actually has a fairly straightforward explanation based on the behavior of two of the key drivers of biodiesel RINs prices–soybean oil prices and the biodiesel tax credit. The conceptual model of the biodiesel market that we have employed in several previous farmdoc daily articles on the pricing of RINs and implementation of the RFS (e.g., October 10, 2014; October 15, 2014; May 28, 2015; July 22, 2015; August 5, 2015) provides the starting point for the analysis. 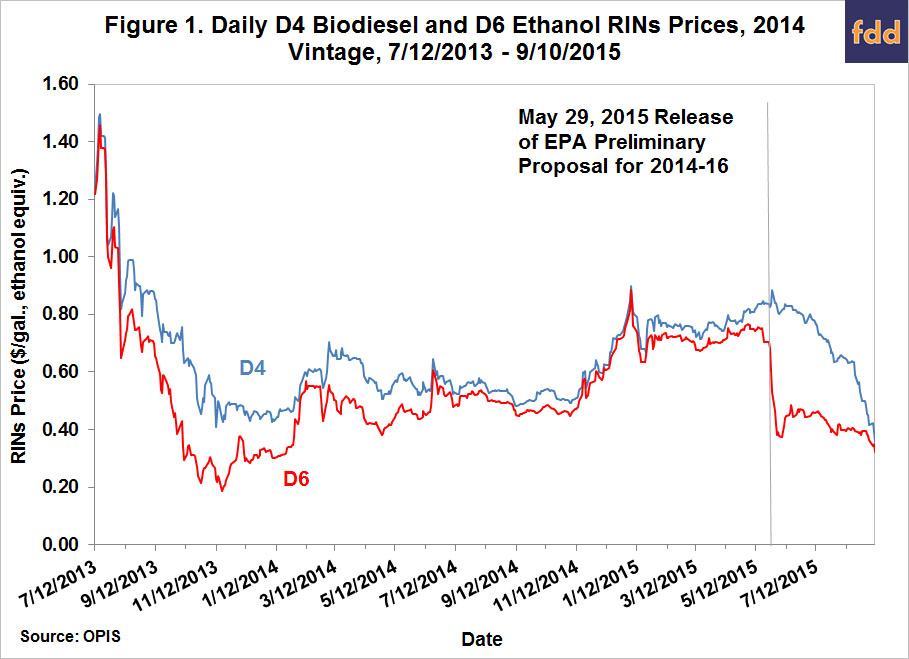 The conceptual model presented in Figure 2 represents the supply of biodiesel producers and demand from diesel blenders at the wholesale level. Retail demand at the consumer level is implicitly represented by a simple percentage markup of the wholesale demand shown in Figure 2. The model also assumes that biodiesel demand is perfectly elastic (horizontal) for biodiesel prices equal to ultra low sulfur diesel prices. This reflects an assumption that biodiesel and diesel are perfect substitutes and that biodiesel is a small enough part of the diesel market that changes in the biodiesel price do not impact the overall demand for diesel fuel. One could go further and adjust biodiesel prices to reflect the lower energy content of biodiesel (about 12% lower) compared to petroleum diesel. However, given the low biodiesel blends typically used in the marketplace today (e.g., B2 or B5), it is doubtful that this lower energy content is priced at the retail level. Furthermore, a growing portion of “biodiesel” consumption in the U.S. is in the form of renewable diesel that has the same energy content as petroleum diesel (farmdoc daily, December 13, 2013). So, we assume no adjustment is necessary for energy content. The supply of biodiesel producers is represented by a standard upward-sloping function that reflects increasing marginal costs as production expands. Note that supply is assumed to reflect domestic conventional biodiesel and renewable diesel production as well as net imports (imports – exports). 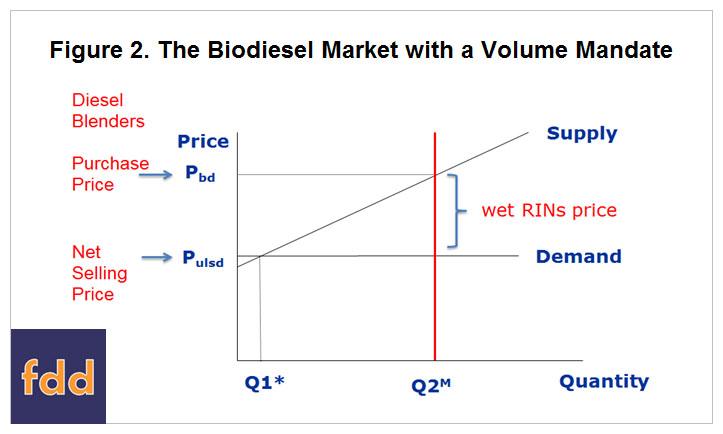 The biodiesel market is shown in Figure 2 with a volume mandate. The mandated quantity (Q2M) is assumed to substantially exceed the small amount of biodiesel that would be produced absent the mandate (Q1*), so the mandate is said to be “binding.” In order to incentivize the higher production, biodiesel producers must be paid a price that is higher (Pbd) than the wholesale diesel price (Pulsd). From the perspective of a diesel blender, there is a wedge between the price paid to biodiesel producers and the price charged to retailers (consumers) for the biodiesel in diesel blends. This wedge, or loss, is the wholesale diesel price minus the biodiesel price at the mandated quantity. The wedge also equals the “wet” price of a D4 biodiesel RINs in this model. The “wet” terminology is used because a gallon of physical (wet) biodiesel generates 1.5 ethanol equivalent RINs under RFS rules. In more formal policy terms, the wet RINs price is the marginal cost of requiring a level of production and consumption above the market equilibrium (Q1*). While this cost is initially borne by diesel blenders, the cost is assumed to be fully passed on to diesel consumers in the form of higher retail prices for diesel (weighted appropriately for the proportion of the blend that is biodiesel). So, diesel consumers ultimately bear the cost of the binding volume mandate.

The biodiesel market shown in Figure 3 considers both a volume mandate and a blender tax credit. The mandate is still binding because it is assumed to require a higher level of production than under a tax credit alone (Q2M>Q2*). From the perspective of a diesel blender, the wedge between the price paid to biodiesel producers and the price charged to retailers (consumers) for the biodiesel in diesel blends is reduced by exactly the amount of the tax credit. Since the wedge is equal to the wet RINs price in this model, the RINs price is reduced by the amount of the tax credit. As noted above, the cost of complying with the volume mandate is ultimately reflected in higher retail diesel prices. The credit partially offsets this cost to consumers by reducing diesel prices. In other words, the cost passed on to consumers is lowered by the amount of the tax credit and the total cost of compliance is shared between taxpayers and diesel consumers. 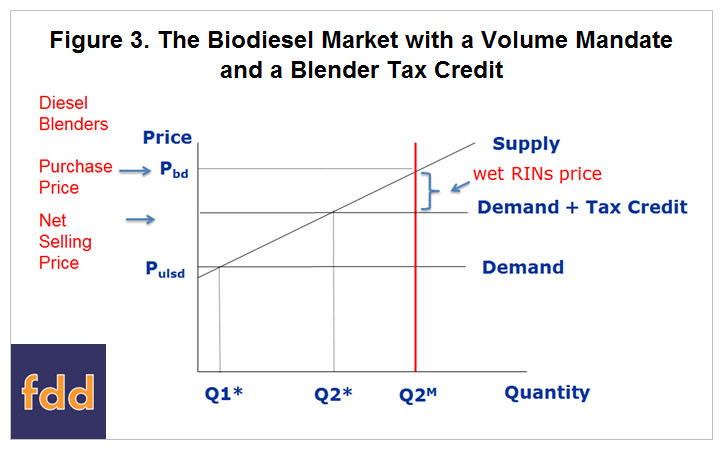 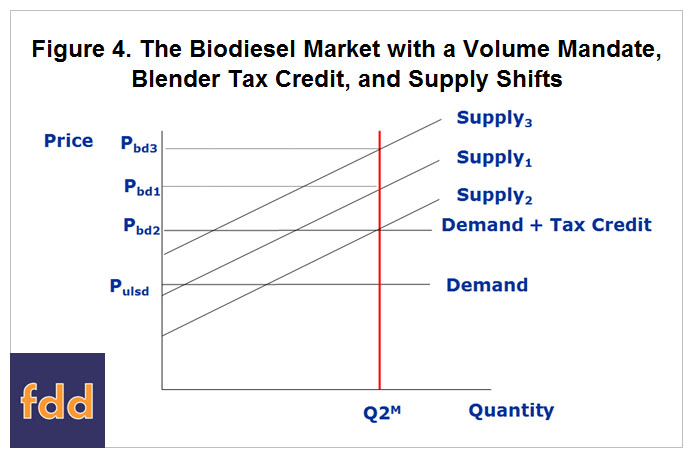 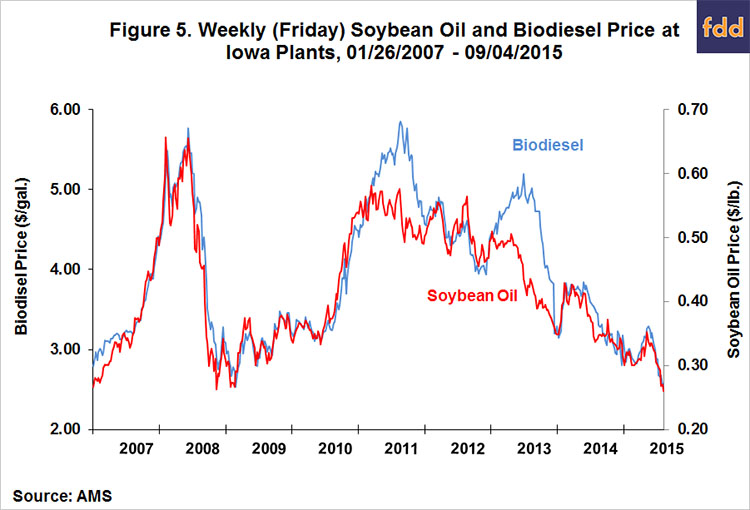 As anyone who has taken an introductory statistics course knows, “correlation does not necessarily imply causation,” so we cannot simply assume that the recent decline in biodiesel prices, which would push down the price of D4 RINs, is due to the decline in soybean oil prices. The conceptual model suggests that the direction of causality runs from soybean oil prices to biodiesel prices under certain conditions, but empirical evidence that confirms this prediction is needed before we can confidently reach this conclusion. Fortunately, which series leads the other can be tested using a statistical procedure called “Granger causality.” This procedure is based on a regression of variable Y on its own lagged values and the lagged values of the variable X and a regression of variable X on its own lagged values and the lagged values of Y. If lagged values of X are significant in the Y regression but lagged values of Y are not significant in the X regression, than it can be concluded that variable X leads, or “Granger causes,” variable Y. 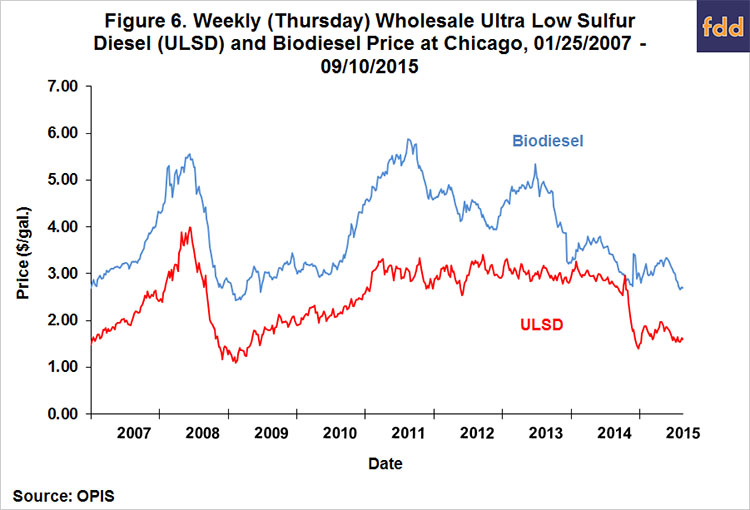 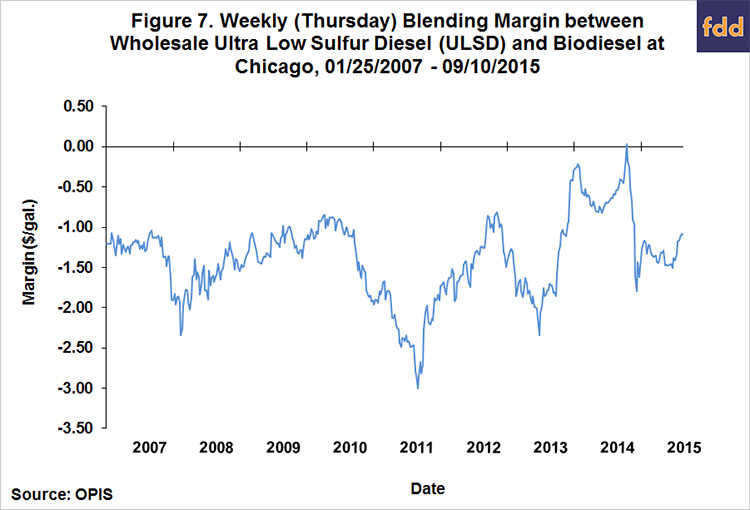 Since the conceptual model in the previous section showed that the price of D4 biodiesel RINs is a function of the blending margin for biodiesel (ignoring time value), the next step of the analysis is to compare these two series. Figure 8 shows the biodiesel blending margin at the wholesale level in Chicago and the D4 RINs price. As before, the blending margin is presented on a weekly basis from January 25, 2007 through September 10, 2015. The available data on D4 prices does not begin until September 3, 2009. Also, note that the D4 RINs prices shown in Figure 8 are not the same as in Figure 1. Prices for “current year” vintage RINs are shown in Figure 8, while Figure 1 presents only 2014 vintage RINs prices. The blending margin shown in Figure 8 is the same as in Figure 7 except the margin in Figure 8 is: i) adjusted for the $1 per gallon tax credit when it is in place (2007-2009, 2011, 2013); multiplied by -1 to facilitate comparison to the market price of D4 RINs; and iii) divided by 1.5 in order to convert the margin from physical (wet) units to ethanol equivalent units. As expected, D4 prices track the movement of blending margins reasonably closely. 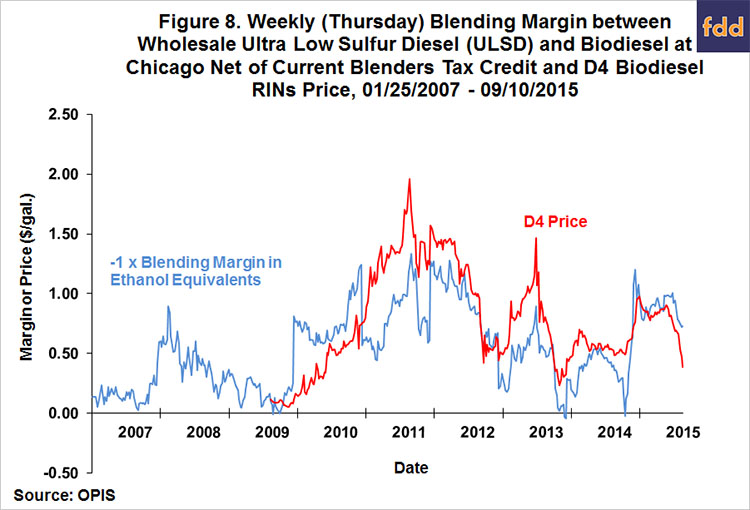 While there is a generally high correlation between the blending margin and D4 prices, there have been periods when the two series diverge considerably. The last three months represent one of those times. Since mid-June, the D4 RINs price has declined from $0.91 to $0.39 per gallon, or a price drop of $0.52. Over the same time period, the blending margin in ethanol equivalent terms has declined from $0.98 to $0.73 per gallon, a decline of $0.25. So, the decline in D4 prices since mid-June is slightly more than twice the decline in the blending margin. What explains this discrepancy? The most likely explanation is that RINs traders have been revising upward their estimates of the chance that the biodiesel tax credit will be reinstated for 2015. The blending margins for 2015 shown in Figure 8 assume the $1 per gallon blender credit is not in place. If a trader believes there is a high probability of the credit being reinstated retroactively for 2015, it would be rational to reduce the valuation of a D4 RINs by as much as $0.67 per gallon ($1/1.5). The logic for doing this is provided by the conceptual model presented in the previous section, which clearly demonstrates that a tax credit reduces the RINs price when there is a binding volume mandate.

There have indeed been important developments over the summer with regard to reinstatement of the biodiesel tax credit. As discussed in these two recent farmdoc daily articles (July 22, 2015; August 5, 2015), the U.S. Senate Finance Committee approved a bill reinstating the tax credit for 2015 and extending it through 2016. While the bill has to be passed by the U.S. House of Representatives and signed by the President to become law, the Senate Committee action provides a strong signal of political support for the biodiesel tax credit, and this has most likely filtered into the valuation of D4 RINs. This same dynamic has been repeated in the RINs market when the tax credit expired for 2010, 2012, and 2014, but was then subsequently reinstated. The revision in RINs trader beliefs about reinstatement of the tax credit is evident in the changing relationship between blending margins and D4 RINs prices shown in Figure 8 for these years. A more detailed discussion of this phenomenon can be found in the farmdoc daily article from October 10, 2014.

The price of D4 biodiesel RINs has fallen by over 50 cents per gallon since mid-June. This is a large drop in price both in absolute and relative terms, and since the RINs price represents the marginal cost of complying with an RFS mandate, it is important to understand why any large change in the RINs price occurs. The first factor contributing to the decline in D4 biodiesel RINs prices is the price of soybean oil, which is the main feedstock used to make biodiesel in the U.S. The price of soybean oil has fallen about 7 cents per pound since mid-June due to improving soybean production prospects in the U.S. and concerns about economic growth in China. With a binding volume mandate, soybean oil prices are the main determinate of biodiesel prices, so the decline in soybean oil prices has led to a decline of more than 60 cents in the price of biodiesel. In turn, the decline in biodiesel prices has been the main factor in narrowing the biodiesel blending margin by about 25 cents. Since the biodiesel blending margin, at least in theory, is equal to the RINs value (ignoring time value), we are left with the puzzling result that the decline in D4 RINs prices is slightly more than twice the size of the decline in biodiesel blending margins. The most likely explanation for this puzzling result is that traders have been revising upward their estimate of the chance that the biodiesel tax credit will be reinstated for 2015. Since a tax credit reduces the RINs price when there is a binding volume mandate, it is rational to reduce D4 prices sharply if traders perceive a high chance of the credit being reinstated. Recent activity in the U.S. Senate is consistent with such an expectation.