The crash in crude oil and gasoline prices that began in the summer of 2014 has, rightfully, been the subject of a great deal of discussion (Figure 1). We have examined the potential impact of the decline on the competitive position of ethanol in gasoline blends and ethanol production profitability in a series of farmdoc daily articles (November 12, 2014; December 4, 2014; December 11, 2014; January 30, 2015; June 24, 2015; July 24, 2015). There are of course numerous other economic and policy issues raised by the dramatic change in prices. The purpose of today’s article is to provide a longer-term perspective on the drop in crude oil and gasoline prices by considering inflation-adjusted prices. 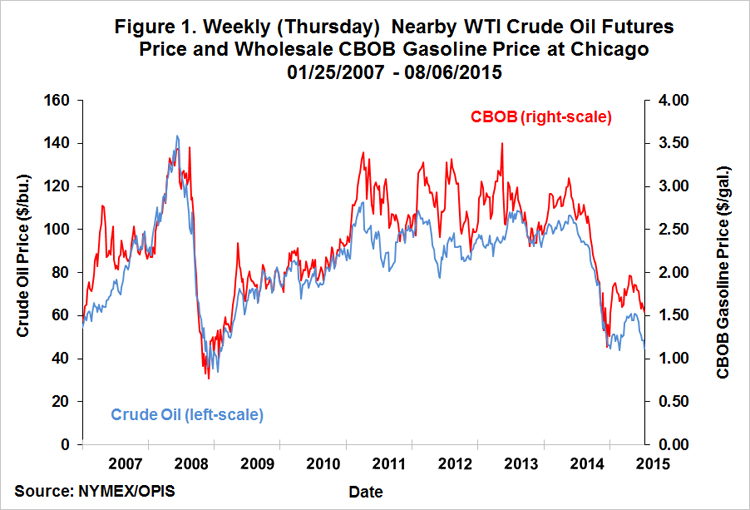 One of the first things taught in an introductory economics course is that real, or inflation-adjusted, prices are what matter in economic analysis. The classic example is a consumer with $100 to spend on two goods. Let’s assume that the price of good 1 is $10 and the price of good 2 is $20. If the consumer spends all their money on good 1, they can buy 10 units of good 1. Likewise, if all money is spent on good 2, the consumer can buy 5 units of good 2. Now, consider an inflationary scenario where the price of all goods and income double. The consumer can still buy a maximum of 10 units of good 1 or 5 units of good 2. Since economic “satisfaction” is based on quantities, the consumer has the same degree of satisfaction in either scenario. This is why it is important to adjust prices and income for inflation before conducting supply and demand analysis over anything beyond short time intervals.

Figure 2 presents both nominal and real monthly spot prices for Brent crude oil over January 1995-August 2015. Brent crude oil prices are considered because Brent prices have predicted U.S. gasoline prices better in recent years, as pointed out by Jim Hamilton (May 16, 2012, June 24, 2012; June 21, 2014) and others. The Brent crude oil price series is collected by the EIA and found here. The August 2015 monthly price is estimated based on the average of daily prices through August 10. Real prices are computed by dividing nominal prices by the U.S. Consumer Price Index (CPI) for all urban consumers, which can be found here. The base for the CPI is 1982-1984=100, which means that computed real prices are stated in terms of average prices over the 1982-1984 period. Another way of saying the same thing is that prices are adjusted to a constant purchasing power in terms of 1982-1984 dollars. It is important to note that a different base period will result in different computed real prices. 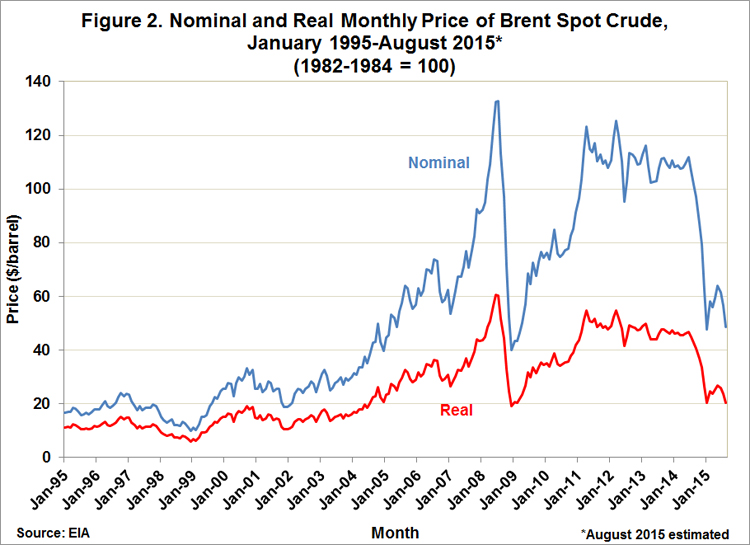 As shown in Figure 2, real crude oil prices (1982-84 $) fluctuated in a relatively narrow range from about $7 to $20 per barrel over 1995 through mid-2004. From this point forward, the real price of crude rose spectacularly, reaching a peak of just over $60 in July 2008. The Great Recession of 2008-2009 saw the real price fall back as low as $20, recover quickly during 2010, and then trade in a range of about $35 to $55 over 2011 through mid-2014. The great crash in crude oil prices since last summer has brought the real crude oil price back to the $20 level. It is interesting to note that crude prices in 2009 only spent five months at this depressed level but have already languished nine months during 2015 near the $20 mark. That key point is that the real price of crude oil is now back to the same level as mid-2004 when the spike in prices first erupted.

Figure 3 presents nominal and real monthly “pump” prices for gasoline in the U.S. The price series is an average of all gasoline grades sold in the U.S. It is collected by the EIA and can be found here. The August 2015 monthly price is estimated based on the average of prices for the first three weeks in August. The same CPI series used to compute real crude oil prices is used to compute real gasoline prices. Not surprisingly, the pattern of real gasoline prices is quite similar to that of real crude oil prices. Again, the key is that the real price of gasoline (1982-84 $) in recent months is just a bit above $1 per gallon, the level prevailing in mid-2004. 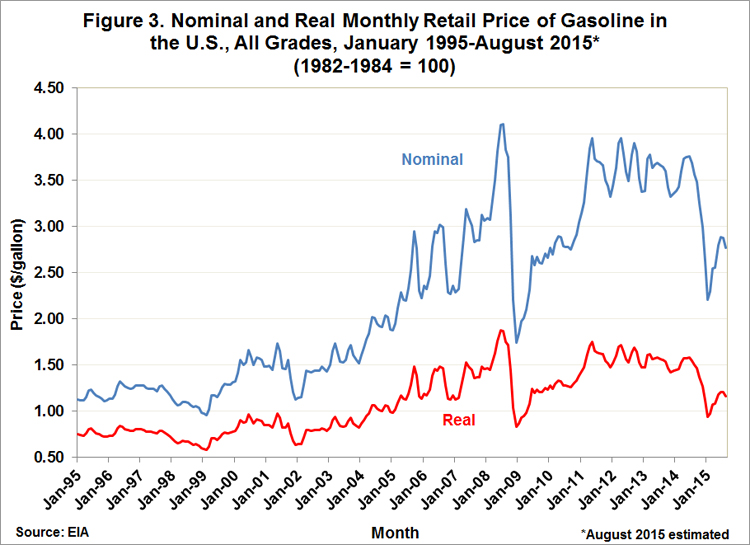 Real (inflation-adjusted) prices of crude of oil and gasoline have now fallen all the way back to levels prevailing more than a decade ago. If real prices continue near these levels, this will provide compelling evidence that the great “super-cycle” in crude oil prices that began in 2004-2005 has come to a close. The weakness in market prices so far in August 2015 suggests that a strong recovery is not in the offing anytime soon. However, one should always be cautious about projecting the level of crude oil prices as the only certainty is that prices will be volatile. One can say with confidence that real crude oil prices near $20 per barrel and real gasoline prices near $1 per gallon ((1982-84 $), if they persist, have profound consequences for not only the U.S. economy, but the entire global economy. Judging by car and truck sales, U.S. consumers are reverting to driving habits not seen for many years. SUV and cross-over sales in the U.S. last month were up 13.1 percent year-over-year while small car sales were down 3.4 percent.

Irwin, S. "Mid-Year Update on the Competitiveness of Ethanol in Gasoline Blends." farmdoc daily (5):135, Department of Agricultural and Consumer Economics, University of Illinois at Urbana-Champaign, July 24, 2015.