Cash rents on professionally-managed farmland likely will decrease for the 2016 cropping year. Rents on non-professionally managed farmland likely will decrease as well. However, projected rent decreases are not large enough to cause farmers to have positive returns in 2016 given current projections of commodity prices and costs. The lagged relationship between returns and cash rents still exists.

Each year, the Illinois Society of Professional Farm Managers and Rural Appraisers conducts a survey of its membership (see here for more detail). In this survey, managers are asked the cash rent for the current year and expectations for next year. This survey provides a good indicator of rents on professionally-managed farmland. Managers give averages and expectations for four classes of farmland productivity:

For excellent quality farmland, the average cash rent on professionally-managed farmland was $374 per acre in 2014 (see Table 1). Cash rents decreased to $350 per acre in 2015, a reduction of $24 per acre. Current expectations are for cash rents to continue the decrease in 2016. Expected rent in 2016 is $318 per acre, a $32 decrease from the 2015 level. Similar decreases are projected for all land classes: 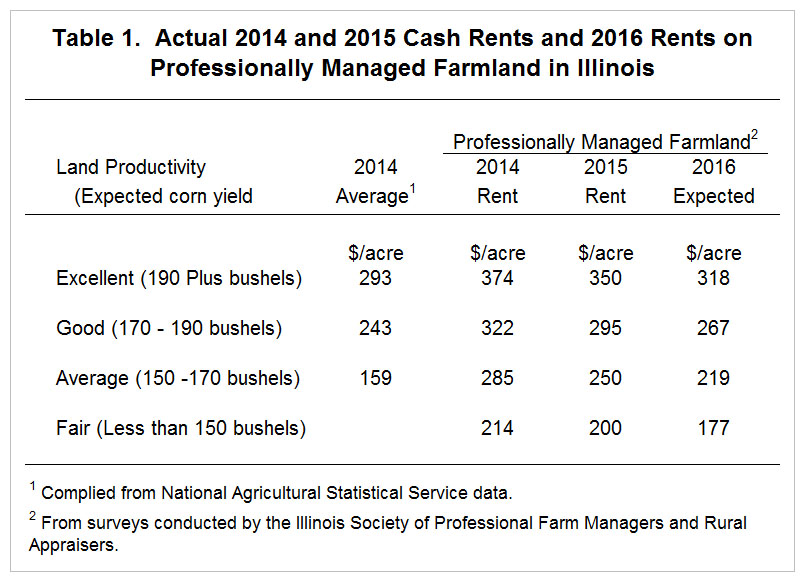 Returns and Rents over Time 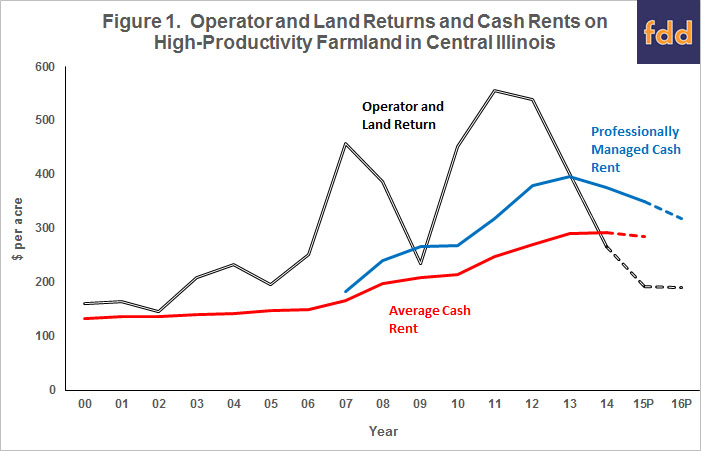 Cash rents likely will decrease in 2016. However, projected reductions will not be enough to cause farmer returns to become positive. Obviously, it isn’t cash rent alone that needs to decrease. Other non-land costs have to decrease as well (see farmdoc daily, September 9, 2015).

Of course, the 2016 operator and land return projection depend on prices, yields, and costs. In preparing the 2016 returns forecast, a price of $3.85 per bushel is used for corn and $9.00 per bushel for soybeans is used. Higher prices or lower non-land costs could cause higher returns. The possibility of higher revenues suggest using variable cash lease arrangement so that landowners can share in higher revenues if they occur (see farmdoc daily, September 9, 2015).

Schnitkey, G. "Cutting $100 per Acre in Costs for Corn and Soybeans." farmdoc daily (5):160, Department of Agricultural and Consumer Economics, University of Illinois at Urbana-Champaign, September 1, 2015