Gasoline prices at the pump in the U.S. closely tracked the stunning collapse of crude oil prices in the second half of 2014. However, this was not the case during 2015. As documented in this recent farmdoc daily article (August 28, 2015), the historical relationship between Brent crude oil prices and U.S. average gasoline prices at the pump suggested that gasoline prices in August should have been about $2.00 per gallon, but were stuck above $2.60 per gallon. A similar result was found for diesel prices in this companion farmdoc daily article (September 30, 2015). It was argued in both articles that the gap between predicted and actual gasoline or diesel prices could be traced to the improving U.S. economy and sharply lower crude oil prices, which, in combination, spurred gasoline and diesel quantity demanded and pushed the production capacity of the U.S. refining industry to the limit. The purpose of today’s article is to provide a more detailed explanation why gasoline and diesel prices in 2015 have been elevated relative to crude oil prices.

We begin by examining the behavior of a widely-followed indicator of transportation fuel demand in the U.S. Figure 1 shows a 12-month moving total of U.S. miles travelled on all roads over January 1991 through July 2015. This data is compiled monthly by the Department of Transportation. The use of a moving total smooths out the noise in monthly data and helps to better identify underlying trends on an annual basis. The chart shows a very steady gain in miles driven between 1991 and 2007, with a peak of a bit over 3,000 billion miles (12-month total) in late 2007 and early 2008. Then, the combined impact of high crude oil prices and the Great Recession drove miles driven down fairly sharply in the second half of 2008 and 2009. This was followed by a plateau at around 2,950 billion miles through 2012. Miles driven slowly began to recover in 2013 and 2014, but did not really begin to take off again until 2015. The year-over-year growth rate in total miles driven has increased every month in 2015 and stood at +3.2 percent in July. U.S. drivers have clearly responded to improved economic growth and lower crude oil prices by increasing miles driven, which, abstracting from any gains in fuel efficiency, implies a higher quantity demanded for gasoline and diesel. 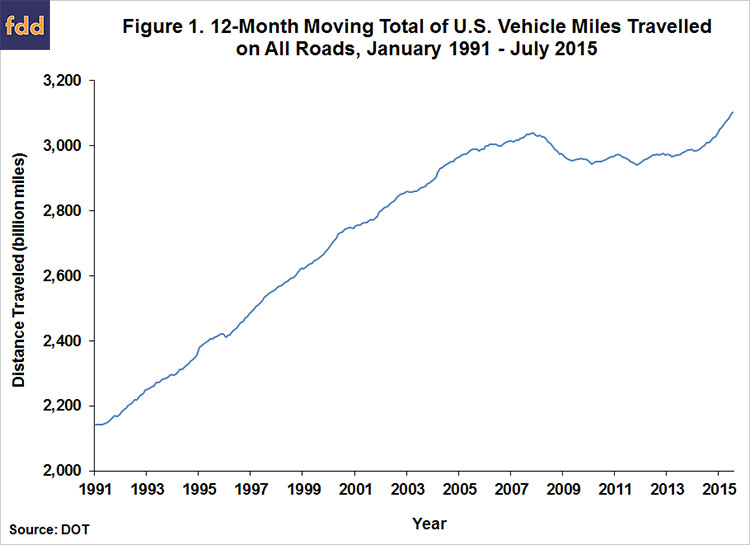 The next step is to examine the degree to which the surge in gasoline and diesel quantity demanded stretched the production capacity of the U.S. refining industry. Figure 2 shows the capacity utilization rate for the U.S. crude oil refining industry over January 2008 through July 2015 as computed by the Energy Information Administration. Given the seasonal peak in driving during the summer, it is no surprise that capacity utilization of refineries also has the same seasonal tendency. There has been a trend towards higher capacity utilization over time in parallel with the recovery in miles driven. What is striking is the jump in utilization rates that started in May 2015, reaching a new peak for this sample period of 95.1 percent in July. This data leaves little doubt that, at least by recent standards, the production capacity of the U.S. refining industry has been pushed in 2015 by surging gasoline and diesel quantity demanded. 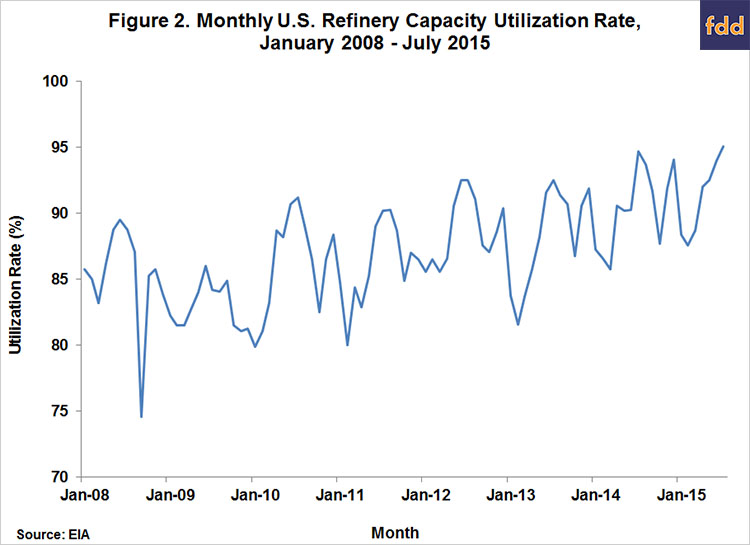 We next examine whether refining margins have widened as capacity utilization rates have increased. Figure 3 presents a widely-used indicator of crude oil refining margins known as the “crack spread.” The term refers to the fact that crude oil is “cracked” into two main products–gasoline and diesel (also, referred to as distillate). The crack spread here is assumed to be a 3:2:1 spread, which implies that 3 barrels of crude oil are used to produce 2 barrels of gasoline and 1 barrel of diesel. This version of the crack spread is easily computed as: (2 X gasoline price/barrel) + (1 X diesel price/barrel) – (3 X crude oil price/barrel). Weekly nearby futures prices for RBOB gasoline are used to represent gasoline prices, weekly nearby futures prices for heating oil are used to represent diesel prices, and weekly nearby futures prices for Brent crude are used to represent crude oil prices. The average computed crack spread over January 25, 2007 through October 5, 2015 is $35.47 per barrel and it represents the refining margin available to cover all other costs besides crude oil. What is striking is how, right on cue, the crack spread began jumping in early 2015 as the surge in gasoline and diesel quantity demanded began to push refining capacity. The jump was very steep in the first three months of the year, with the spread reaching around $50 per barrel. As demand continued to increase, the crack spread increased to a peak of just under $70 per barrel in early July. This was only exceeded during this sample period by the May 2007 peak. The spread remained above $60 through mid-August, but fell sharply thereafter, all the way back to the historical average. The large drop in the crack spread since mid-August was mainly due to a $0.35 per gallon drop in the price of RBOB gasoline. 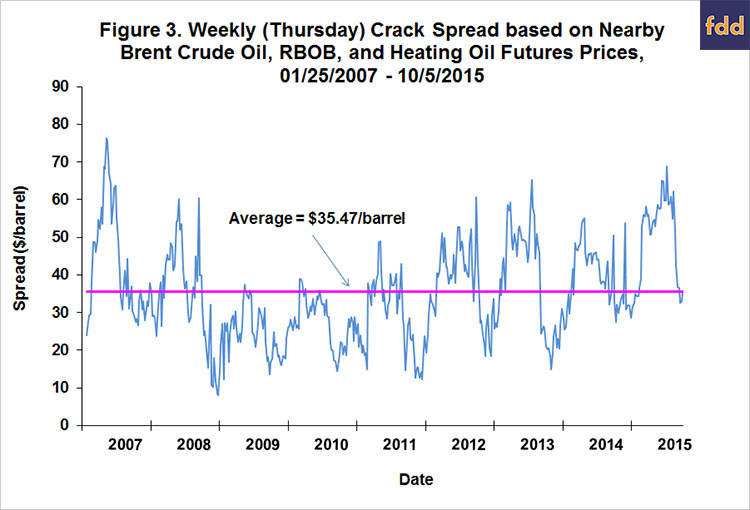 We can now move to the final step of the analysis by revisiting the relationship between predicted gasoline prices based on Brent crude oil prices and actual prices. This comparison was first presented in the August 28 farmdoc daily article and is updated through September 2015 in Figure 4. This chart clearly shows that actual gasoline prices started to jump well above predicted prices in early in 2015, with the gap averaging $0.36 per gallon over March through August. This time period almost exactly lines up with the period of elevated crack spreads, strongly suggesting that the higher refining margins were ultimately passed on to gasoline consumers in the form of higher prices at the pump. It is interesting to note that the gap between predicted and actual gasoline prices declined from an average in August of $0.61 per gallon to an average in September of $0.32 per gallon. 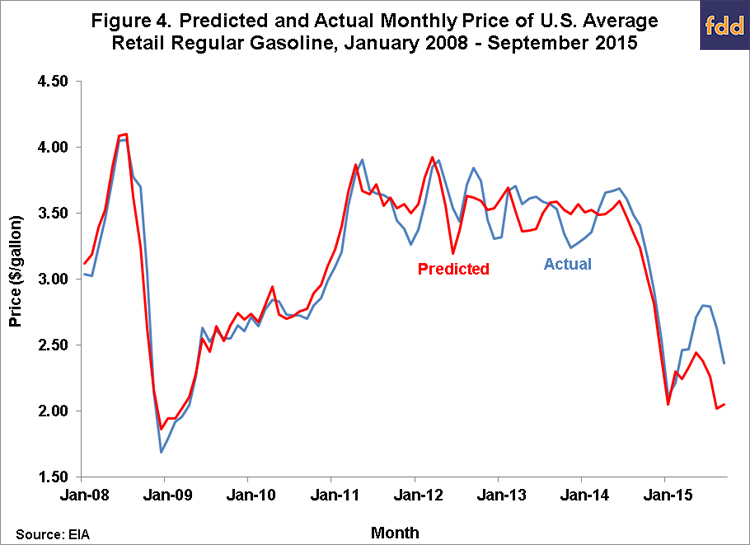