A recent farmdoc daily article (August 28, 2015) examined the relationship between Brent crude oil prices and U.S. average gasoline prices at the pump. The historical relationship indicated U.S. gasoline prices should be about $2.00 per gallon, but remained stubbornly above $2.60 per gallon. It was argued that the gap between predicted and actual gasoline prices could be traced to the improving U.S. economy and sharply lower crude oil prices, which, in combination, have spurred gasoline demand and pushed the production capacity of the U.S. refining industry to the limit. The purpose of today’s article is to extend the analysis to U.S. pump diesel prices.

We begin by examining the relationship between crude oil prices and retail (pump) diesel prices in the U.S. Figure 1 shows a scatter plot of monthly spot prices for Brent crude oil and monthly U.S. average prices for retail (ultra low sulfur) diesel over January 2008-December 2014. Brent crude oil prices are considered because Brent prices have predicted U.S. gasoline prices better than WTI prices in recent years, as pointed out by Jim Hamilton (May 16, 2012, June 24, 2012; June 21, 2014) and others. The Brent crude oil price series is collected by the EIA and found here. Diesel prices also are collected by the EIA and can be found here. With an R2 of 0.88, the fit of the relationship is strong but not quite as high as found earlier for gasoline (0.92). The coefficients continue to have a sensible interpretation. Since a barrel of crude oil contains 42 gallons, a logical slope is simply 1/42 or 0.024. The slope estimate in Figure 1, at 0.0262, is close to this predicted value. The intercept, 1.0419, estimates the national average of: i) state and federal gasoline taxes; ii) refinery margins, and iii) transportation and other markup costs. 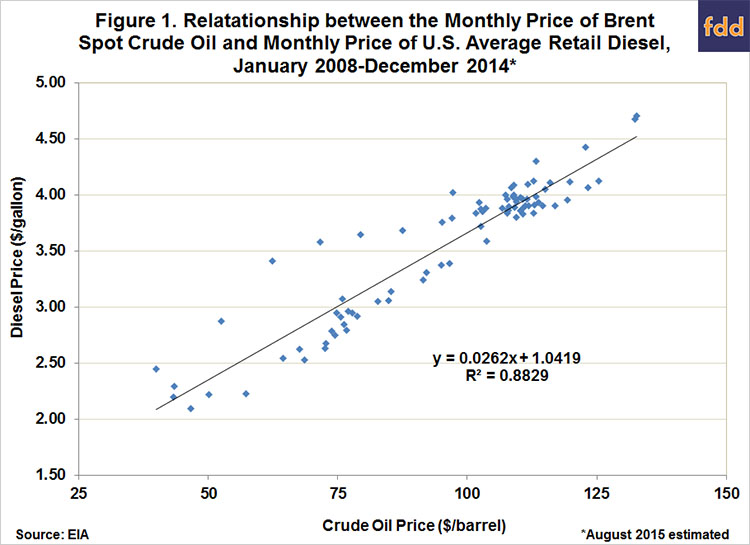 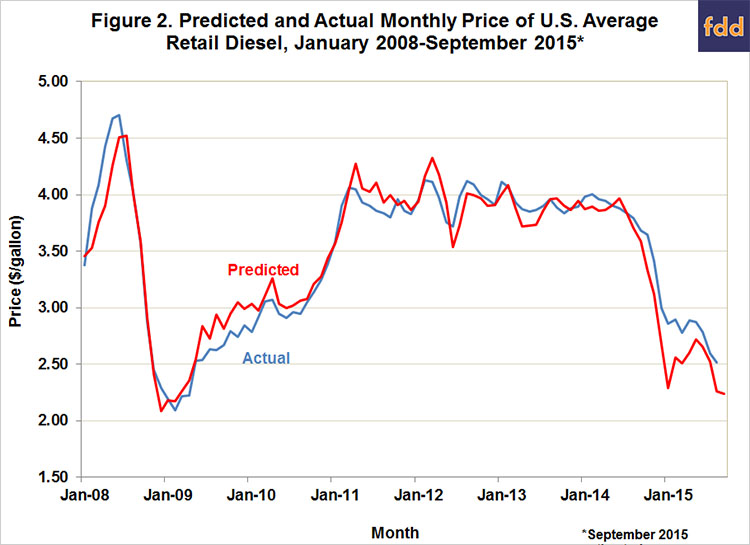 With Brent crude oil prices currently trading near $45 per barrel, the historical relationship between crude oil and diesel prices indicates that the U.S. average “pump” price of diesel should be about $2.25 per gallon. Instead, diesel prices seem are stuck at about $2.50. Like gasoline (farmdoc daily, August 28, 2015), the biggest factor in explaining the $0.25 gap between predicted and actual diesel prices is the production capacity of the U.S. refining industry, which has been pushed to the limit by rapidly growing gasoline and diesel demand. For example, the U.S. Department of Transportation reported that miles driven in the U.S. was a record 283.7 billion miles in July 2015, the highest ever for that month and up 4.2 percent year-over-year. Diesel prices are likely to remain at a premium to crude oil prices until the squeeze on refining capacity is eased.