The Farm Service Agency (FSA) computes county yields used in calculating Agricultural Risk Coverage–County Option (ARC-CO) payments. FSA yields differ from county yields released by the National Agricultural Statistical Service (NASS); however, these NASS yields will be useful in estimating 2015 ARC-CO payments. NASS likely will release 2015 yields in February 2016 while release of FSA could be as late as autumn of 2016. Many farmers, lenders, and landowners will desire payment estimates before the autumn. In many cases, NASS yields can be used to arrive at realistic estimates of ARC-CO payments. To aid in ARC-CO payment estimation, the average differences between FSA and NASS yields are reported in this article for corn in Illinois counties.

FSA uses the NASS data in calculating county yields where NASS data exists. However, NASS data is supplemented with data from the Risk Management Agency (RMA) on failed acres for corn and several other crops. NASS county yield equals:

Figure 1 shows the average difference between FSA and NASS yields. A -6.0 value means that FSA yields average 6 bushels per acre less than NASS yields from 2009 to 2014. Values are reported for all counties where four years of differences can be calculated. A yield comparison could not be conducted for two reasons: 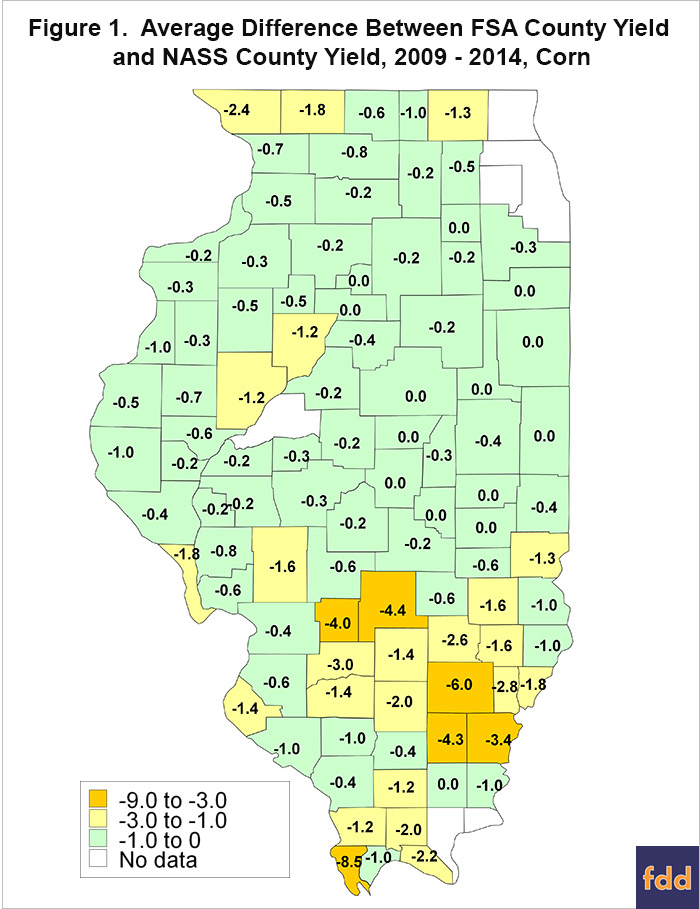 As can be seen in Figure 1, differences between FSA and NASS yields are relatively small in most cases. Throughout much of northern and central Illinois, yield differences average less than a bushel per acre. These counties tend to have few RMA failed acres. However, there are some counties with larger average differences. These counties occur next to Wisconsin, along the Illinois River, and in the southern part of Illinois. In these counties, failed acres have been larger.

Yearly differences can vary from the averages in Figure 1 for counties where FSA yields are lower than NASS yields. To Illustrate, take Wayne County Illinois with a -6.0 average difference. Differences by year in Wayne County are:

Differences range from 0 bushels per acre to -11 bushels per acre. Because the difference is not stable, arriving at accurate estimates of ARC-CO payments will be problematic in counties where failed acres have a history of occurring. In many years, an eleven-bushel swing in yield can have a dramatic impact on ARC-CO payments. Some intuition of how many failed acres existed will aid in estimating the difference between FSA and NASS yields.

Where NASS data exists, FSA yield is less than or equal to NASS yield. Since ARC-CO payments increase with lower yields, a conservative estimate of ARC-CO payments will be obtained using the yield per acre reported by NASS. There will be cases where this procedure underestimates ARC-CO payments.

The above explanation is useful in counties where NASS data is reported. Where NASS data does not exist, FSA uses different data and procedures to arrive at county yields. In these cases, estimating FSA county yields before there release will be difficult.