In 2015 and 2016, average net incomes on grain farms in Illinois are projected at levels similar to those from 1998 through 2002, the last time very low incomes occurred in agriculture. Current projections place average net income on Illinois grain farms at about $20,000 per farm, considerably below the $104,000 per farm average for 2014. At current projections of commodity prices, net incomes in 2016 likely will be low as well.

Figure 1 shows average net incomes on Illinois grain farms enrolled in Farm Business Farm Management (FBFM) from 1996 through 2014, along with a projection for 2015. Farms summarized in these averages are located in Illinois and represent a variety of farm sizes, tenure positons, and debt levels. Farms have increased in size over time. In 2014, average farm size was near 1,500 acres, but the sample includes many smaller and larger farms. 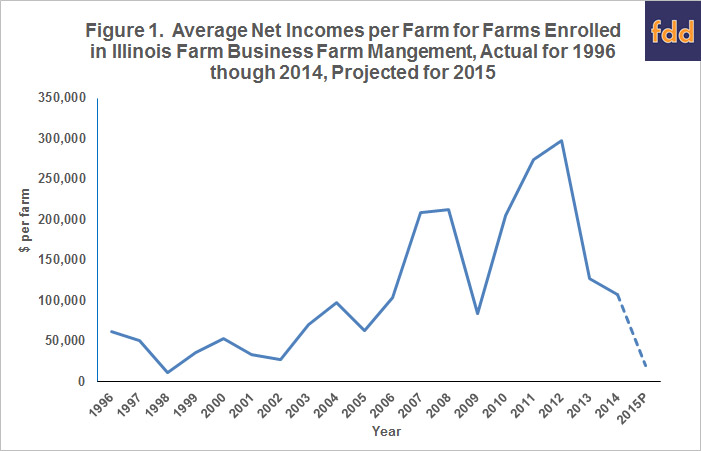 Agricultural Risk Coverage county option (ARC-CO) payments are estimated to contribute around $35,000 to 2015 revenue. These are 2015 payments that will be received in the fall of 2016. There still is a great deal of uncertainty surrounding these payments as neither county yields nor market year average prices are known at this point.

Without these payments, many farmers would have negative incomes for 2016.

At this point, commodity prices for 2016 are projected to be below $4.00 for corn and $9.00 for soybeans. These commodity prices will result in low incomes. Cost cutting will be a key factor determining 2016 incomes. If costs are not reduced, and trend yields materialize, 2016 net incomes will be close to 2015 net incomes.

The current projection of $20,000 of income per farm is close to that made in August (farmdoc daily July 21, 2015). This $20,000 net income estimate presumes that cost cutting occurred in 2015. If costs were not cut, significantly lower incomes could result.

Grain farms likely will have low incomes for several years. The mid-2010s are shaping up as a period comparable to 1998 — 2002, the last time grain farming experienced a protracted period of low prices. As with all periods of low incomes, cost control and working capital management will be key to financial stability.

Schnitkey, G. "Marketing Gains Impacts on 2014 and 2015 Net Incomes on Grain Farms." farmdoc daily (5):97, Department of Agricultural and Consumer Economics, University of Illinois at Urbana-Champaign, May 27, 2015