This is a presentation summary from the 2015 Illinois Farm Economics Summit (IFES) which occurred December 14-18, 2015. A complete collection of presentations including PowerPoint Slides (PPT) and printable summaries (PDF) are available here.

“The 2016 standards are expected to spur further progress in overcoming current constraints in renewable fuel distribution infrastructure, which in turn is expected to lead to substantial growth over time in the production and use of renewable fuels.” 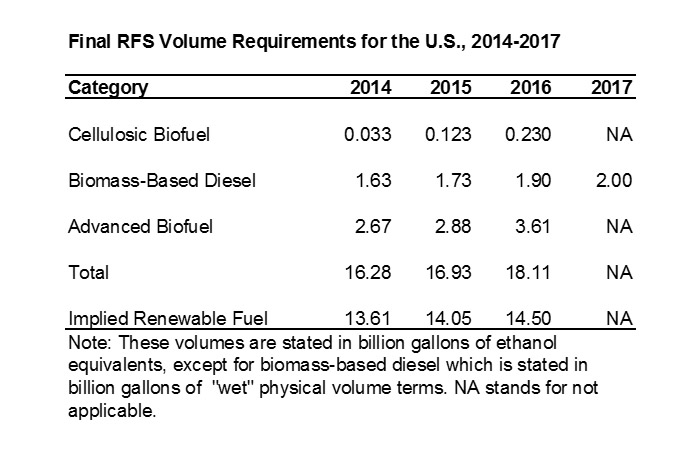 Many in agriculture have expressed disappointment that the ethanol mandates for 2014-2016 were cut below statutory levels in the final rulemaking (statutory levels of 14.4, 15.0, and 15.0 billion gallons in 2014, 2015, and 2016, respectively). To gain some perspective on these cuts to the RFS mandates it is helpful to go back and take a look at the cuts in the first proposal for 2014 released by the EPA on November 30, 2013. Assuming no growth in gasoline and diesel use and a waiver of all cellulosic volumes, the November 2013 proposal essentially put a ceiling on the conventional ethanol mandate of 13.01 billion gallons. Projecting this new framework over the remaining life of the RFS through 2022 implied very large cuts in the mandates, totaling 17.1 billion gallons for ethanol. The language in the November 2013 proposal also seemed to signal the possibility of future cuts to the advanced mandates if meeting the advanced mandates would have necessitated substantial ethanol use above the E10 blend wall. The message from the November 2013 proposal was unmistakable–very large cuts in RFS mandates relative to statutory volumes. 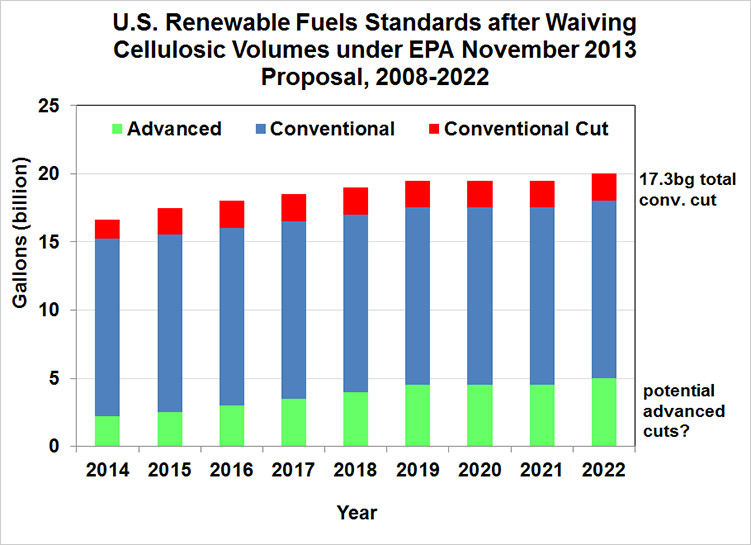 Now roll the clock forward to the final 2014-2016 EPA rules released on November 30. While it is still reasonable to assume a waiver of all cellulosic volumes (as a first approximation), gasoline and diesel use has clearly rebounded due to lower crude oil prices. In addition, the EPA sent strong signals in the latest proposal that it favored: i) getting the ethanol mandate back to statutory levels as soon as possible, likely in 2017; and ii) increasing advanced biofuels due to climate mitigation benefits. The combined effect of the changes relative to the original proposal in November 2013 was to reduce the size of the cuts to the conventional ethanol mandates over 2014-2022 dramatically, from a total of 17.3 to just 1.9 billion gallons. The bottom-line is that the latest rulemaking from the EPA implies relatively modest cuts in the ethanol mandate and that these cuts will likely only be imposed for three years (2014/15/16). In addition, there is nothing in the proposal that signals a willingness on the part of the EPA to cut the advanced mandate in the future. All in all, this represents a significant win for conventional and advanced biofuels and puts the RFS back on track to spur further growth in both types of biofuels production, especially biodiesel. 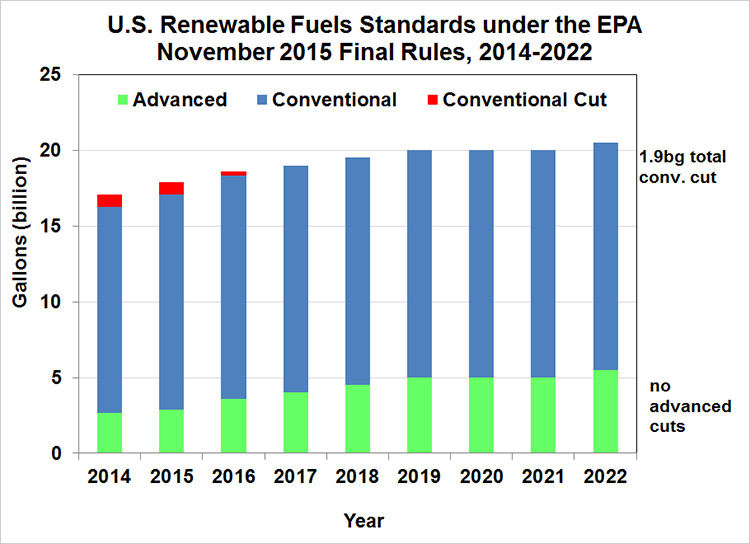 January 5, 2015 Note: This article has been modified from the original version published on December 30, 2015. The last sentence of the article was changed to make clear the distinction between conventional and advanced biofuel according the RFS. Corn-based ethanol is a “conventional” biofuel and biodiesel is an “advanced” biofuel under the RFS.