The EPA released their long-awaited preliminary proposal for 2014-2016 RFS standards late last month. In our first farmdoc daily article (June 3, 2015) after the release of the proposal, we analyzed whether the renewable (ethanol) mandates proposed by the EPA, while lower than statutory levels, were still high enough to provide a “push” for biofuels use beyond the E10 blend wall. The analysis confirmed that the mandates do indeed imply pressure towards higher ethanol blends or non-ethanol biofuel, but this depends on assumptions about growth in gasoline use and ethanol inclusion rates. In our second farmdoc daily article (June 10, 2015) after the release, we investigated how the degree of push above the blend wall changes depending on whether the EPA targets a fixed volumetric or fixed fractional standard. The analysis in these articles highlights an important change in direction for EPA policy with respect to setting annual RFS standards. Compared to the preliminary proposal for 2014 released on November 30, 2013, the latest proposal indicates the EPA is serious about pushing RFS standards past the E10 blend wall. The purpose of today’s article is to examine the implications of the EPA continuing this policy direction after 2016.

The analysis in our previous two articles (farmdoc daily, June 3, 2015; June 10, 2015) focused on 2014-2016, as these are the years covered by the EPA’s recent RFS rulemaking. Here, we assume that over time, the EPA will expand the magnitude of the push implied in the most recent proposal, consistent with language in the proposal. For example:

“The proposed volume requirements would push the fuels sector to produce and blend more renewable fuels in 2015 and 2016 in a manner that is consistent with the goals Congress envisioned. The proposed volumes are less than the statutory targets for 2015 and 2016 but higher than what the market would produce and use in the absence of such market-driving standards. The 2015 and 2016 standards are expected to spur further progress in overcoming current constraints and lead to continued growth in the production and use of higher ethanol blends and other qualifying renewable fuels. In this regard the proposed standards are intended to fulfill the spirit and intent of Congress and provide guidance to market participants. Once finalized, this rule would put renewable fuel production and use on a path of steady, ambitious growth.” (p. 33102)

Our focus is on calculating the magnitude of the annual renewable, advanced, and total RFS gaps through 2022 that would be created by implementation of the RFS along this policy trajectory. We conducted a similar analysis in a farmdoc daily article on February 19, 2015, but under the assumption that the renewable mandate is implemented at statutory levels for all years over 2014-2022. The RFS statutory mandates for total, advanced, and renewable (ethanol) fuels each year from 2014 through 2022 can be found in Table 1.

For 2014, 2015, and 2016, the analysis is based on the assumptions that (1) the RFS is implemented as proposed and (2) the estimates and projections relative to gasoline consumption and consumption of advanced ethanol included in that proposal are correct. The analysis for subsequent years is based on the assumptions that (1) the cellulosic, and therefore total advanced biofuel mandates will continue to be written down, (2) the mandate for biodiesel will continue to increase each year through 2022, (3) domestic gasoline and diesel consumption in 2017-2022 stabilizes at the projected level for 2016, and (4) the domestic ethanol inclusion rate remains stable from 2017 through 2022. We also make the simplifying assumption that the level of RINs stocks and biofuels stocks remain constant.

In order to implement the RFS standards over 2017-2022 with an increasing push above the E10 blend wall, estimates of the blend wall for these years must be made. We do this in Table 2 based on estimates of domestic gasoline consumption and the inclusion rate of ethanol. Note that estimates for 2014, 2015, and 2016 are drawn directly from the EPA’s proposal. For 2017-2022, we assume domestic gasoline consumption stabilizes slightly above the projection for 2016 and the ethanol inclusion rate stabilizes near the average rate estimated by EPA for 2014-2016. Estimated ethanol consumption declines 70 million gallons in 2015, increases 100 million gallons in 2016, increases 64 million gallons in 2017, and remains at the 2017 level through 2022. Those estimates are obviously very sensitive to the assumptions about the magnitude of domestic gasoline consumption and the rate of increase in consumption of higher ethanol blends (E15 and E85). The assumed constant inclusion rate implies no growth in the consumption of higher ethanol blends. However, the potential for this growth will be evident in estimated RFS gaps shown later.

Table 3 summarizes the assumptions about the implementation of the RFS each year through 2022. Implementation for 2014-2016 is based on the EPA’s proposed mandates. For subsequent years, it is assumed that the cellulosic mandate continues to be written down to small, but increasing, levels and that the total advanced biofuels mandate is written down by an equal amount. It is assumed that the biodiesel mandate is increased by 100 million gallons each year and the renewable mandate is increased by 200 million gallons each year until the statutory level of 15 billion gallons is reached in 2021. These assumptions are obviously arbitrary to some degree, but reflect our expectation of continued slow growth in cellulosic ethanol production and the expectation for EPA rulemaking to provide a meaningful push for increased biofuels consumption.

Finally, it is interesting to consider the size of the total RFS gap for 2014-2022 under the trajectory assumed here versus that under statutory volumes. We computed the total gap for statutory volumes by assuming the renewable mandate was 14.4 billion gallons in 2014 and 15 billion gallons thereafter. All other assumptions are exactly the same as in Tables 2-6. Figure 1 presents the estimated total RFS gaps under the two scenarios. Given the write down of the renewable mandate for 2014-2016 under the EPA proposal it is not surprising that there are large differences in the total gap for these years. Specifically, the estimated total gap is 3.75 billion gallons smaller for 2014-2016 under the EPA proposal compared to implementation at the statutory renewable mandate levels. However, after 2016 the difference in the total gap narrows fairly quickly and disappears entirely by 2021. The differences total only 2 billion gallons over 2017-2022. This, of course, assumes that the EPA would be willing to increase the push in the RFS standards along the lines assumed here. 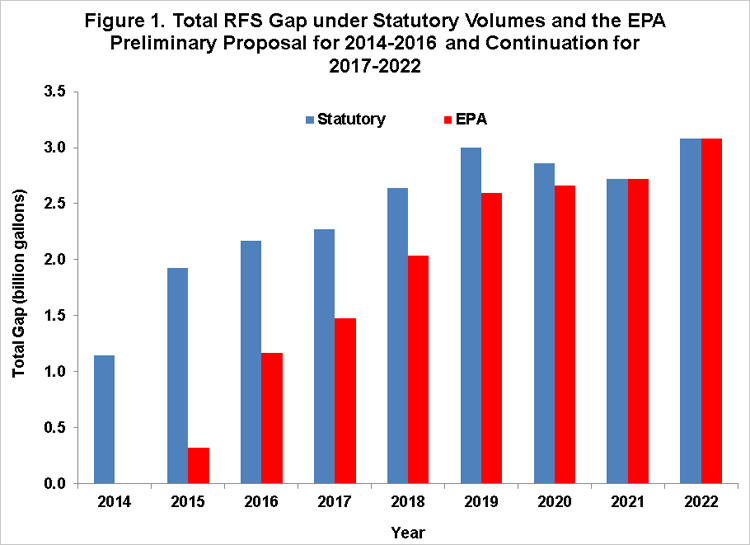 The EPA signaled an important change in direction for setting annual RFS standards in its recent preliminary proposal for 2014-2016. The proposal indicates the EPA is serious about pushing RFS standards past the E10 blend wall. We examined the implications of the EPA continuing this policy direction after 2016 and found that the size of the total gap in the RFS mandates, or the “push,” grows surprisingly quickly. For example, the total gap exceeds 2 billion gallons by 2018 and grows to 3 billion gallons in 2022. If the EPA were to follow this push strategy for the RFS through 2022, the next interesting question is how the gaps would be filled. The renewable (ethanol) component of the gap could be filled by a combination of larger quantities of higher ethanol blends and/or larger quantities of biodiesel. The advanced component of the gap could be filled by a combination of larger imports of Brazilian ethanol and larger quantities of biodiesel. Larger imports of Brazilian ethanol could be problematic, however, under the constraints of a blend wall. Each additional gallon of imported ethanol would replace a gallon of conventional ethanol which in turn would widen the renewable gap. That larger gap would have to be filled with additional quantities of higher ethanol blends or additional quantities of biodiesel. The end result would likely be larger quantities of biodiesel. There are a number of issues that will impact the growth path of biodiesel consumption even with an aggressive RFS. These include the fate of the biodiesel tax credit, the economics of blending Brazilian ethanol, and the rate of growth in consumption of non-conventional ethanol and higher blends of ethanol. We will examine some of these issues in future articles.

Irwin, S., and D. Good. "What if the EPA Implements RFS Mandates for Renewable Fuels at Statutory Levels?" farmdoc daily (5):31, Department of Agricultural and Consumer Economics, University of Illinois at Urbana-Champaign, February 19, 2015.