The financial markets and economists are in agreement that the Federal Reserve Board is likely to begin raising interest rates at its December 15-16, 2015 meeting. It seems certain that rates will be raised several times in the next year. As farmers begin thinking about what crops to plant next spring, a part of their thinking may be: what effect will interest rates have on commodity prices?

The literature, confirmed by recent research I conducted with my graduate student Aitbek Amatov, has reached a strong consensus that both an increasing money supply and declining interest rates are good for commodity prices, including agricultural commodities. The Fed’s quantitative easing programs functioned similarly to more traditional methods of increasing the money supply. Now, after seven years of low interest rates and a quadrupling of the Federal Reserve’s balance sheet (pumping about $3 trillion into the system although much of this ended up as excess reserves at the Fed), the Fed policies which favored higher commodity prices are about to shift into reverse.

Will the Fed Finally Raise Rates?

The Fed Fund futures contracts suggest a 74 percent probability that the Fed will raise the Fed Funds rate by a quarter percent at its December meeting. Such a move would be announced on December 16, at the conclusion of their two day meeting. The Fed traditionally raises interest rates in a series of small increases. The implied forecasts in the far out futures suggest that interest rates might be increased by one-half or three-quarter of one percentage point by July 2016. Chart 1 below shows the market opinion for rates by next summer. 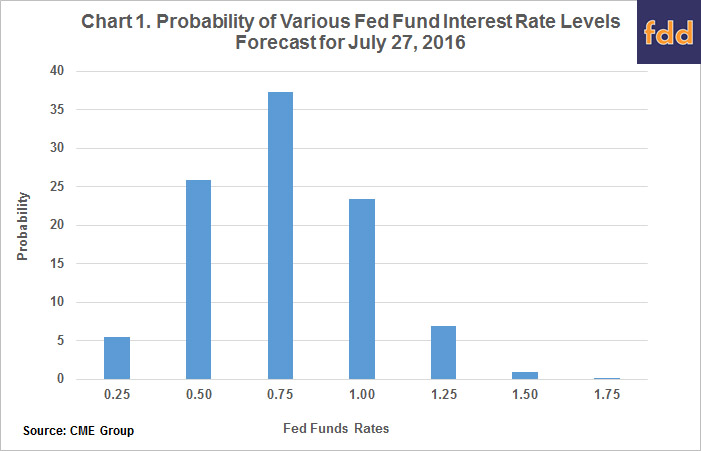 What will Rate Increases Mean for Commodity Prices?

For a one percentage point increase in interest rates the high end of past research suggests a fall in agricultural commodity prices of five or six percent (Frankel), with other results (including mine) suggesting smaller impacts. My recent research with Amatov suggests that interest rate sensitivity is still in this range even during the period of the Fed’s historically unprecedented interventions, with our estimate for this period still being below Frankel’s. Thus, the increase in interest rates anticipated by the start of next summer’s harvest should be expected to cause at most a two or three percent decline in agricultural commodity prices. That means roughly a dime or so per bushel for corn and wheat and maybe a quarter per bushel for soybeans.

However, given that the relationship between interest rates and commodity prices is well known, the futures markets for agricultural commodities likely have already partially priced in those impacts. I would not expect the inevitable increase in interest rates to be positive for commodity prices, but the magnitude of the negative impact should be relatively small and fairly evenly spread across the major row crops.

The effects generally manifest themselves slowly, with full adjustment to a new equilibrium level after interest rate moves taking about a year. Further, there is some evidence of overshooting when prices adjust, meaning that prices might drop sharply in the first few months and then recover some of those losses over the next year as everyone adjusts to the new level of interest rates. Therefore, if you see a big move in commodity futures prices after the Fed’s first announcement of a rise in their interest rates, do not panic; things should settle down.

When and How Fast will this Happen?

Given the Fed’s avowals to go slowly in raising interest rates, I expect to see increases to begin on December 16 and rates to continue to rise in total about two percent in a series of seven or eight increases of a quarter of a percent each (although there is some chance they innovate and raise by only one-eighth of a percent at a time). It might easily take the Fed two years or more to finish this rise in interest rates. That means perhaps a drop of five to ten percent in agricultural commodity prices spread over three crop marketing years.

For comparison, chart 2 below shows the path of interest rate increases by the Fed for the past three periods of rate increases. As you can see, we should anticipate at least one year of rising rates, and given the current circumstances, I expect this to be one of the longest and slowest rate normalizations ever. It is likely the Fed will continue slow rate increases for more than two years (unless a recession interrupts them and spurs a return to rate cuts). 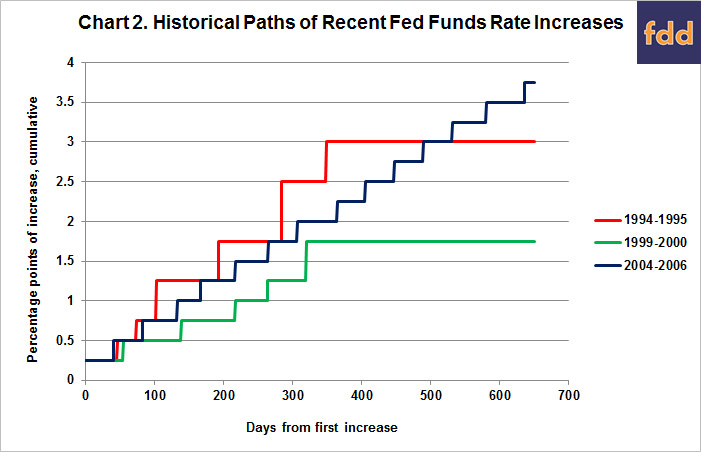 Obviously, producers will not be excited about anything that lowers commodity prices further from today’s levels. However, given the natural variability in prices, it will be hard to pin down a five or ten percent drop spread over three crop years. So, the main takeaways from this discussion of the long-anticipated rise in interest rates are that it appears to have finally arrived and it will not be positive for agricultural prices. Still, there is no need to overreact as the magnitude of the impact is likely to be reasonable small and to arrive slowly.