In the farmdoc daily article of January 13, 2016 we chronicled the recent sharp decline in crude oil and gasoline prices that has resulted in the “upside-down” relationship of ethanol prices exceeding gasoline prices. Figure 1 shows wholesale ethanol and CBOB gasoline prices at the U.S. Gulf, and it indicates that ethanol prices have remained well above gasoline prices over the last month. We noted in the previous article that crude oil and gasoline prices could remain low for an extended period, perhaps threatening the competitive position of ethanol in gasoline blends. However, the RFS conventional ethanol mandate provides a safety net for domestic ethanol consumption even when ethanol prices are above gasoline prices. In addition, the conventional ethanol mandate implies that the price of ethanol would have to remain above the ethanol plant “shut down” price in order to ensure that mandated quantities of ethanol are produced. We did acknowledge that a continuation of high ethanol prices relative to gasoline prices opens the possibility that ethanol will become a relatively expensive source of octane in gasoline blends. Here, we examine the price relationship between ethanol and the alternative sources of octane known as aromatics as an indication of the competitive position of ethanol as an octane enhancer. 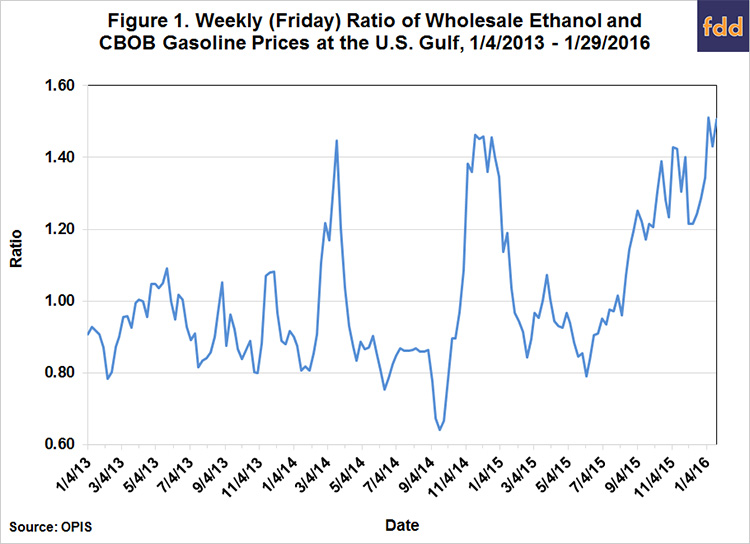 Gasoline sold at the pump is actually a blend of ethanol and a number of petroleum products, such as methane, butane, and naptha (see Leffler, 2008, Ch. 14). Refinery blending economics for gasoline are complicated due to the differing array of characteristics of alternative blending components and regulatory requirements to produce “spec” gasoline. For example, ethanol has chemical characteristics that may be beneficial, e.g., as an octane enhancer, or detrimental, e.g., high vapor pressure. Energy companies have developed sophisticated mathematical refinery models to determine optimal blends of the various gasoline components given prices and technical specifications.

The weekly (Friday) price of each of the three aromatics and the price of CBOB gasoline at the U.S. Gulf are shown in Figure 2 for the period January 4, 2013 through January 29, 2015. The source for the aromatics price data is Bloomberg, while the CBOB data is from OPIS. During 2013 and 2014 benzene was the highest priced aromatic, sometimes by a wide margin, but this premium essentially disappeared in early 2015. The prices of toluene and xylene were very similar for the entire period. All three aromatics prices in 2015 and so far in 2016 have tended to move together. CBOB prices were always substantially lower than the price of the aromatics, which is not surprising given the higher production costs of the aromatics compared to other petroleum blendstocks. In general, the aromatics have been priced about 140 to 170 percent above CBOB. It is interesting to note that the aromatic price premium has actually increased in recent months. 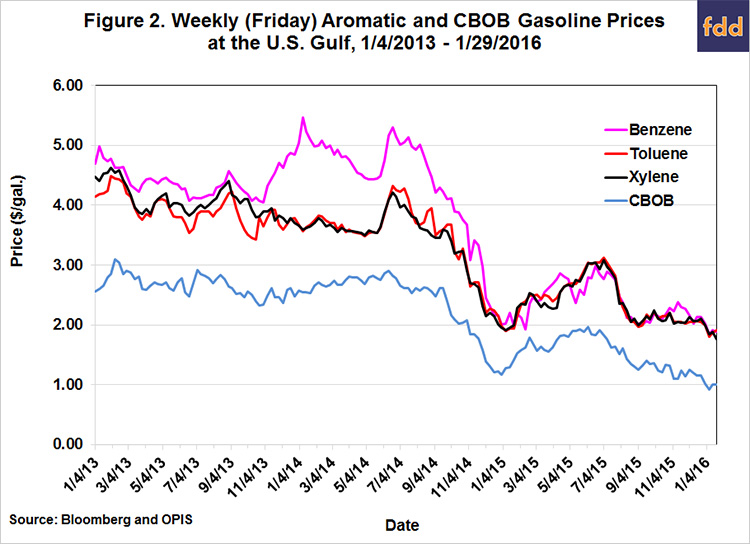 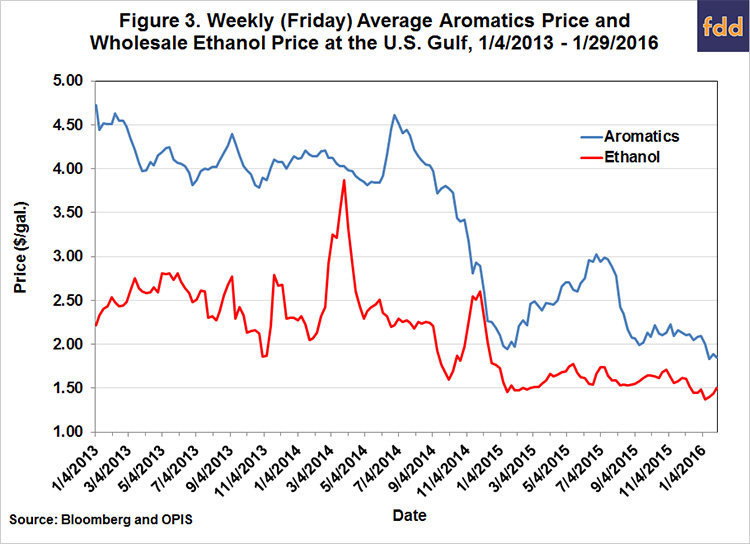 Ethanol has been a relatively cheap source of octane in gasoline blends for U.S. refiners for several years. However, the recent rise of ethanol prices above gasoline prices has raised the specter of ethanol losing its place as the cheapest source of octane. While this would not necessarily limit ethanol consumption due to the existence of the RFS conventional ethanol mandate, it would have implications for the cost of complying with the RFS mandates. To assess any changes in the competitive position of ethanol in gasoline blends, the price of the aromatic compounds benzene, toluene, and xylene were analyzed relative to the price of ethanol. These compounds have octane ratings generally similar to that of ethanol and have a long history as octane enhancers in gasoline blends. Despite the recent increase in ethanol prices relative to gasoline, ethanol prices still remain below that of the aromatics. As a result, ethanol continues to retain its position as the low cost octane enhancer in gasoline blends. The biggest threat to maintaining this position is a shortfall in U.S. corn production that caused both corn and ethanol prices to spike.