The sharp decline in crude oil that began in the summer of 2014 has taken crude oil prices as low as $30 per barrel in recent days. Wholesale gasoline prices have largely followed crude oil prices down and presently are near $1 per gallon, a level not seen in over a decade. As discussed in several previous farmdoc daily articles (May 23, 2014; November 12, 2014; December 4, 2014; January 30, 2015), this has raised questions about the competitiveness of ethanol in gasoline blends and role of ethanol as a relatively cheap source of octane. We argued in these earlier articles that ethanol prices were not likely to move above gasoline prices for any length of time and that market adjustments to maintain the competitive position of ethanol would be rapid. Higher ethanol production and lower ethanol prices had been effective in the past at maintaining ethanol’s place in gasoline blends and we expected this to continue in the future. The purpose of today’s article is to examine whether this logic is still valid in the face of continuing declines in crude oil and gasoline prices.

The blending economics of gasoline are complicated (e.g., Leffler, 2008) and requires a sophisticated mathematical refinery model for a complete analysis. As in our previous articles, we examine the ratio of ethanol and gasoline prices as an indicator of ethanol blending economics. Figure 1 shows the weekly (Thursday) ratio of wholesale ethanol and CBOB gasoline prices at Chicago over January 25, 2007 through January 7, 2016. The chart shows that the ratio has moved over a very wide range, but, with the exception of the Great Recession during late 2008 and 2009, the ratio infrequently has been above one. In other words, ethanol has rarely been priced above gasoline at the wholesale level, which, in turn meant that ethanol was a relatively cheap source of octane in gasoline blends. As we predicted, the spike in ethanol prices relative to gasoline prices in late 2014 and early 2015 was short-lived and the ratio reverted back to the recent historical average of 0.86 by April 2015. However, the ratio moved above 1.0 in late August 2015, reached a short-term peak of 1.46 in November, and now stands at 1.28. It is important to emphasize that the recent increase in the price ratio has largely been driven by falling gasoline prices, as ethanol prices have also fallen, just not as fast as gasoline prices (Figure 2). In sum, the ethanol/gasoline price ratio has now been above one for over four months and seems to be flashing a warning sign about the competitiveness of ethanol in gasoline blends. 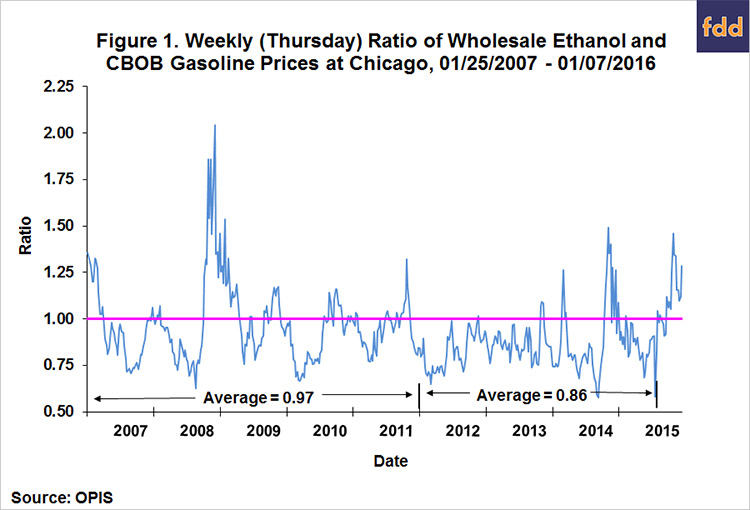 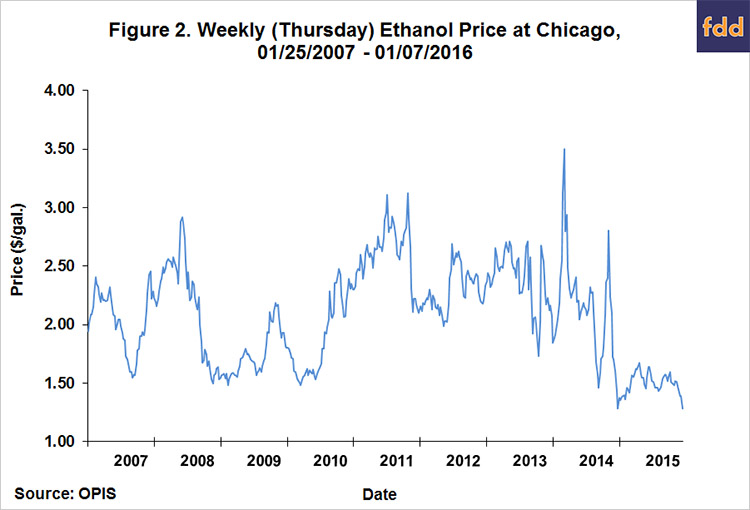 A key issue moving forward is whether market adjustments will force the ethanol/gasoline price ratio back toward the historical average, as has happened in the past, or “this time is truly different” and the ratio will remain at elevated levels. We argue that circumstances are truly different now and the relationship between ethanol and gasoline prices has been effectively turned upside down for the foreseeable future. This opens the possibility that ethanol will become a relatively expensive source of octane in gasoline blends, but this requires a direct comparison to the price of alternative sources of octane such as the aromatics (farmdoc daily, January 30, 2015).

To understand the new upside-down pricing of ethanol and gasoline, we need to begin by reviewing the “safety net” role of the RFS conventional ethanol mandate. This safety net role can be demonstrated with a simplified version of ethanol market supply and demand that we have used in a number of previous analyses of RINs pricing and RFS mandates (e.g., farmdoc daily, May 28, 2015; September 23, 2015; December 4, 2015). Figure 3 shows the ethanol market without an RFS mandate. The supply of ethanol is represented by a standard upward-sloping function that reflects increasing marginal costs as production expands. The demand curve is L-shaped, reflecting the fact that the demand curve is flat (perfectly elastic) at the price of gasoline and then vertical (perfectly inelastic) at the E10 blend wall. The flat portion of the demand curve reflects an assumption that ethanol and gasoline are perfect substitutes and that ethanol is a small enough part of the gasoline market that changes in the ethanol price do not impact the overall demand for gasoline (we assumed the break-even ethanol price to be 1.1 times the CBOB price in our previous articles instead of 1.0 times CBOB). It is also assumed that ethanol prices do not need to be adjusted to reflect the lower energy content of ethanol (about one-third lower) compared to petroleum gasoline. This is based on the argument, admittedly controversial, that ethanol is such a small portion of the blend that the loss of efficiency is not easily discernible by the consumer. The vertical section of the demand curve at the E10 blend wall assumes that infrastructure and regulatory constraints prevent the use of higher ethanol blends such as E15 and E85. Imports and exports of ethanol are ignored in the model for simplicity. At least in the short-run, these assumptions do not affect the main conclusions drawn from the model. 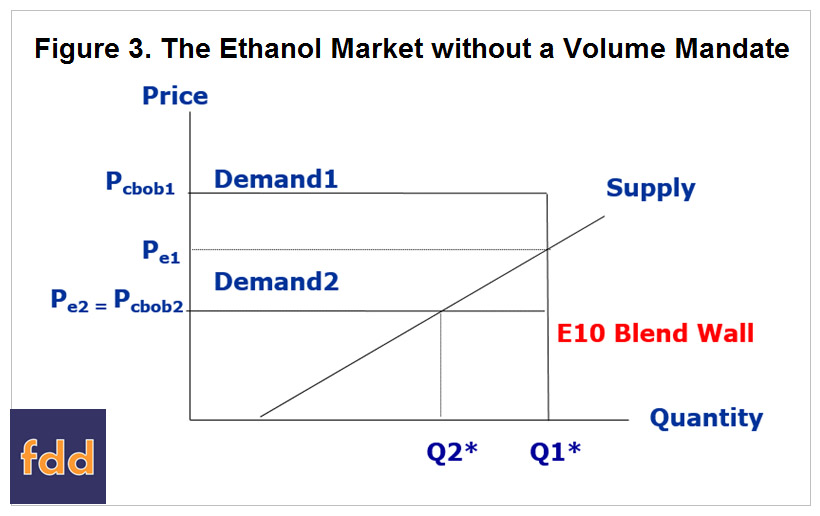 Next, the version of the model in Figure 4 assumes the existence of an ethanol mandate at some volume above the E10 blend wall. The supply curve is the same as in Figure 3 but the demand curve is now vertical (perfectly inelastic) at the E10 blend wall. In essence, quantity demanded cannot be less than the E10 blend wall because of the government mandate and it also cannot exceed the physical limit imposed by the E10 blend wall. This leads to two key predictions: i) the equilibrium quantity of ethanol is fixed at the E10 blend wall; and ii) the price of gasoline does not impact the demand for ethanol. These results challenge much of the conventional wisdom about pricing of ethanol relative to gasoline. Specifically, to the degree the model is descriptive of actual market conditions, ethanol prices will move independently of gasoline prices. The main source of shocks in the model is changes in the price of corn that shift the supply curve up and down, which implies that corn prices in the short-run tend to drive ethanol prices, not the other way around (see the farmdoc daily article on October 9, 2013 for further discussion on this point). 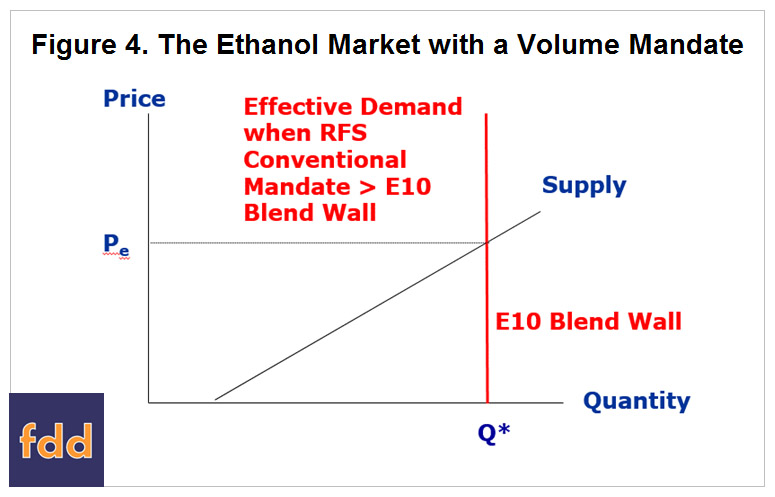 To summarize, the conceptual model presented in Figures 3 and 4 indicates that the price of gasoline in the short-run has little if any impact on the quantity of ethanol consumed so long as the RFS conventional mandate is greater than the E10 blend wall. The next result needed to help understand the new upside-down pricing of ethanol and gasoline is that the ethanol quantity floor provided by the RFS mandate also effectively puts a floor under ethanol prices. The logic is actually straightforward: i) the mandate assures that ethanol production must be at least equal to the E10 blend wall; and ii) to achieve the mandated production level in the short-run, given the price of corn, the ethanol price cannot go below the level of total variable costs in order to avoid plant shutdowns. In other words, ethanol plants need to be able to at least cover total variable costs, mainly corn, in the short-run to be able to produce the mandated volume of ethanol. This implies that the short-run shutdown price of ethanol plants is effectively a floor price for ethanol.

We now have all the pieces in place to complete the argument why ethanol prices will not necessarily track the recent decline in gasoline prices. An example using current prices will help illustrate. Wholesale gasoline right now is trading about $1.00 per gallon. The market price of ethanol at the historical average ethanol/gasoline price ratio of 86 percent would be $0.86 per gallon. Converted to a plant price in Iowa this would be $0.78 per gallon. At current corn, DDGS, corn oil, and other input prices, we estimate the shutdown price at Iowa plants to be $1.11 per gallon. Ethanol prices cannot fall below this level, otherwise plants would shut down and not enough ethanol would be produced to meet the mandate. Hence, $1.11 is effectively the floor price for ethanol at the plant level. Of course, there is a range of production costs at ethanol plants and some would shut down at higher or lower ethanol prices. Ethanol prices cannot be driven down below the (average) floor price to the level implied by the historical average ethanol/gasoline price ratio because this would force much of the ethanol industry to shut down production, which cannot occur and also have the ethanol mandate met. This is why ethanol prices have been supported above the price of gasoline in the face of plummeting crude oil and gasoline prices and why we believe this is the “new normal” going forward.

There are two caveats to our analysis that should be mentioned. First, ethanol and gasoline prices can be related in our conceptual model if the same factors driving crude oil and gasoline prices also impact corn prices, which would mean that the shutdown price for ethanol plants would fall as gasoline prices drop. This has occurred in recent weeks to a limited degree, as crude oil prices since December 1, 2015 have been off about 30 percent and corn prices have also been off but only by about 5 percent. Second, we ignored the possible impacts of RINs stocks in meeting the RFS conventional ethanol mandate. The existence of RINs stocks means that until these stocks are exhausted physical production of ethanol does not need to be as large as the level of the E10 blend wall since part of the mandate can be met by drawing down the stock of RINs.

The price of ethanol for most of the last decade has been below the price of gasoline, indicating that ethanol has been a relatively cheap source of octane in gasoline blends. The ethanol/gasoline price ratio has been above 1.0 for the last four months and presently stands at about 1.3. The hefty premium of ethanol to gasoline threatens the position of ethanol as a cheap source of octane. We argue that a combination of circumstances has effectively turned upside down the historical relationship between ethanol and gasoline prices for the foreseeable future. With ethanol demand stuck at the E10 blend wall, due to the “safety net” feature of the RFS conventional ethanol mandate, ethanol prices cannot fall below the shutdown price of ethanol plants because this would result in less production than is needed to fulfill the mandate. In fact, gasoline prices have fallen to such low levels that they are now well below our current estimate of the shutdown price for a representative Iowa ethanol plant. Unless crude oil and gasoline prices rebound this appears to be the “new normal” going forward. Furthermore, the ethanol/gasoline price ratio could increase even more if gasoline prices stay low and corn prices increase, which, for example, could occur under poor summer growing conditions in the U.S.

Gasoline gallon equivalent. In Wikipedia. Last modified on September 7, 2015, at 09:33, and retrieved January 13, 2016, from https://en.wikipedia.org/wiki/Gasoline_gallon_equivalent.