Working capital captures much attention as 2015 financial records are brought to a close and balance sheets are prepared for the period ending December 31, 2015. Calculated by subtracting current liabilities from current assets, working capital is a measure of funds available to purchase inputs and inventory after the sale of current farm assets and payment of all current farm liabilities. Adequate working capital is related to the size (in dollars) of the farm business. Higher levels of working capital indicate a greater ability to withstand adverse financial conditions. Current assets include: 1) cash and cash equivalents; 2) crop, feed and market livestock inventories; and 3) prepaid expenses. Current liabilities include: 1) operating loans; 2) the current portion of intermediate and long term debt, 3) accrued real estate and income tax and 4) end-of-year accrued expenses. One shortcoming of working capital is that it does not take into account the access a farm operator might have to operating loans or other short-term financing sources. 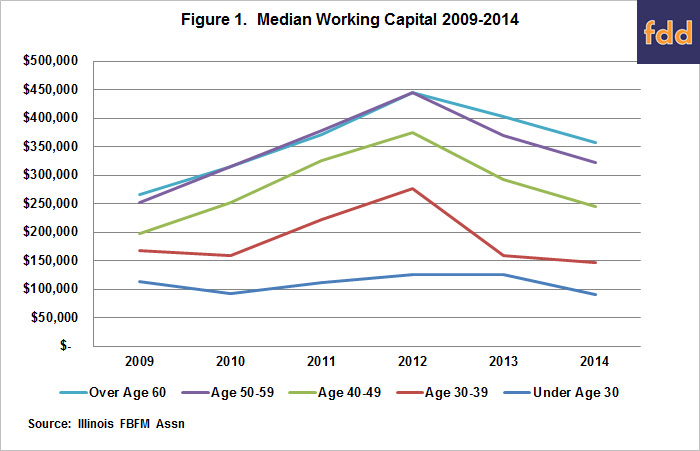 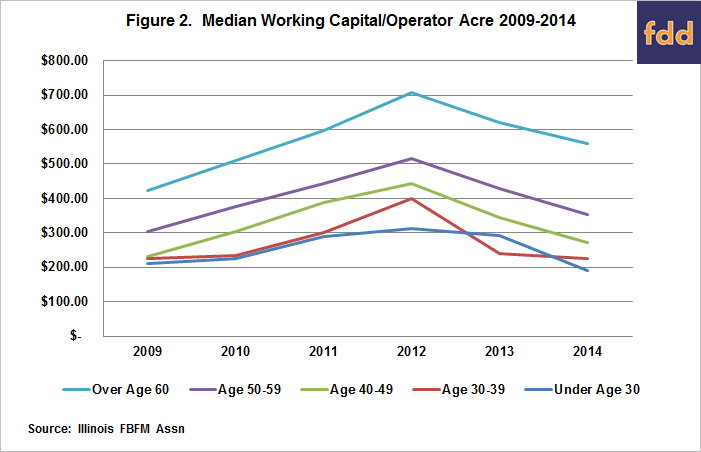 Figure 2 also seems to indicate that as the farm operator ages, the average number of acres farmed increases as well. This tends to minimize the differences in working capital per operator acre for the lower four age groups.

The authors would like to acknowledge that data used in this study comes from the local Farm Business Farm Management (FBFM) Associations across the State of Illinois. Without their cooperation, information as comprehensive and accurate as this would not be available for educational purposes. The Illinois FBFM Association, which consists of 5,500 plus farmers and 60 professional field staff, is a not-for-profit organization available to all farm operators in Illinois. FBFM staff provide on-farm counsel coupled with recordkeeping, farm financial management, business entity planning and income tax management. For more information, please contact the Illinois FBFM Office located at the University of Illinois Department of Agricultural and Consumer Economics at 217-333-5511 or visit the FBFM website at www.fbfm.org.

Krapf, B, D. Raab, and B. Zwilling. "Farm Liquidity: Then and Now." farmdoc daily (5):130, Department of Agricultural and Consumer Economics, University of Illinois at Urbana-Champaign, July 17, 2015.

Zwilling, B., B. Krapf, and D. Raab. "Changes in Working Capital." farmdoc daily (5):90, Department of Agricultural and Consumer Economics, University of Illinois at Urbana-Champaign, May 15, 2015.