In 2015, most counties in the western Corn-belt had yields above trend, while many counties in northern Indiana, northwest Illinois and western Ohio had yields below trend. Illinois yields were mixed. Maps of county yields are presented in this article.

County yield data were obtained from the National Agricultural Statistical Service (NASS), an agency of the U.S. Department of Agriculture. Yields reported in this article represent the “all” county yield, including irrigated and non-irrigated acres. NASS computes irrigated and non-irrigated yields for some counties, mostly located in Nebraska, Kansas, and surrounding states. Again, yields reported here are for all acres in a county.

Actual-to-trend values above 1.0 occurred in most counties along the Red River Valley in North Dakota and Minnesota, in eastern South Dakota and eastern Nebraska, central and southern Minnesota, and in Iowa. Overall, corn yields in the western Corn-belt tended to be above trend. 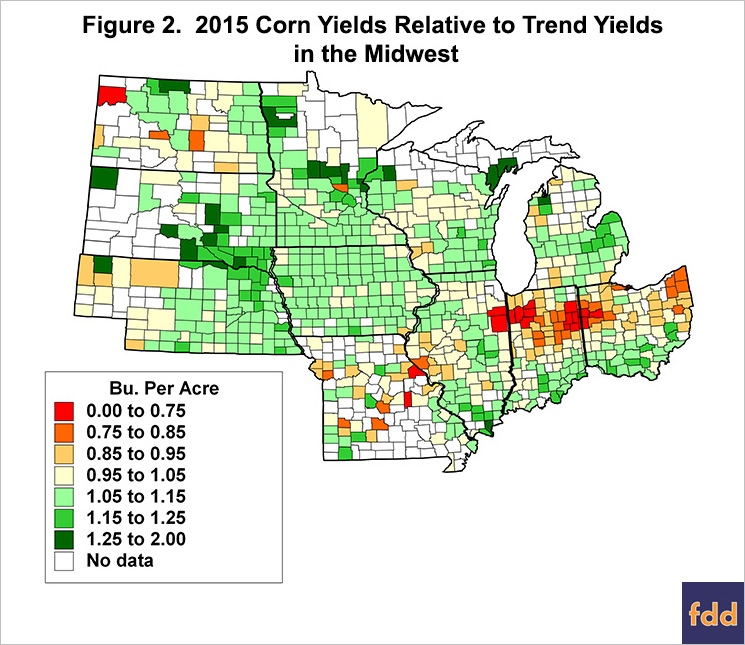 On the other hand, there was a large band of counties in the eastern Corn-belt that had actual-to-trend yields below 1.0. This band begins in northeast Illinois, extended across northern Indiana, ending in northern Ohio. Very wet spring and early summer conditions led to much lower yields in this band. 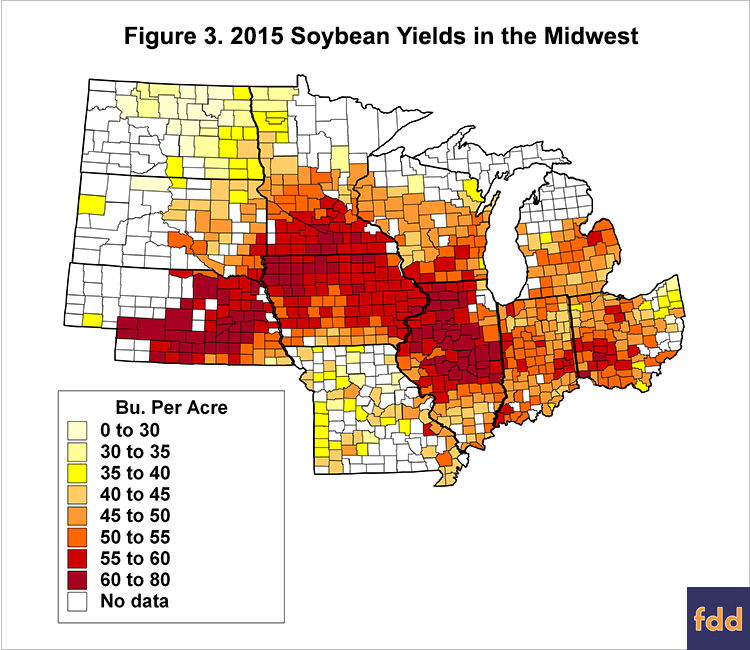 Actual-to-trend yields were above 1.0 in the majority of counties in eastern Nebraska, South Dakota, Minnesota, Iowa, Wisconsin, Illinois, and Michigan (see Figure 4). Many counties in northern Indiana, western Ohio, and northeast Illinois had actual-to-trend yields below 1.0. As described above, this area also had low corn yields. In this area, the wet weather took its toll on both corn and soybean yields. Other areas of low yields include North Dakota, Northern Missouri, and Eastern Ohio. 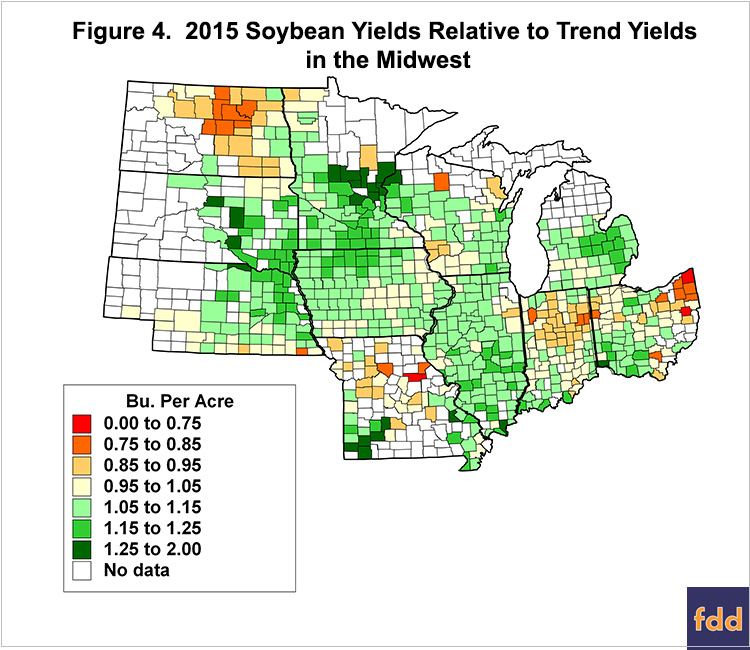 In 2015, U.S. corn yield was 168 bushels per acre and soybean yield was 48 bushels per acre. Both corn and soybean yield were above trend. Obviously, these national yields would have been higher had eastern Corn-belt yields been higher. To have exceptionally high U.S. yields, the vast majority of counties in the Midwest usually have yields above trend (see farmdoc daily March 25, 2014 for more discussion).

Farm incomes were extremely low in 2015. Northern Indiana, northeast Illinois, and northwest Ohio likely will have lower incomes than other areas because of low yields. As a result, financial reserves went down more in areas of low yields.

The following two figures show actual-to-trend yields for the U.S, thereby expanding the area shown in Figures 2 and 4.