USDA recently announced that they project net farm income to decline for a third straight year in 2016, and is expected to be the lowest since 2002 (USDA-ERS, 2016). Government payments are to rise to $13.9 billion which if realized would represent approximately 25 percent of net farm income. U.S. net farm income has declined 56 percent from its recent peak of $123.3 billion in 2013.

The public sector safety net that is now in place to buffer crop farmers from the economic downturn has two dominant components (not including disaster assistance and other programs such as low interest emergency loans) – payments received under the farm program (ARC-CO, ARC-I, or PLC), and subsidized crop insurance. The majority of Midwest corn and soybean farmers chose the Agricultural Revenue Coverage – County Option (ARC-CO) farm program option which in essence provides a payment per base acre of corn and soybeans that depends on the level of yields and prices – details of the computations are provided in Keeney (2014). The crop insurance program provides an indemnity payment to farmers if prices and/or yields decline, depending on the program and coverage level chosen. The most common program choice is revenue protection (RP) which buffers gross revenue from price and/or yield reductions – coverage level choices range from 50 to 85 percent of market revenue.

When the crop insurance and farm programs were initiated, it was anticipated that they would provide an effective safety net for farmers who might encounter significant price and/or yield reductions due to changing market conditions or weather/disease events. But crop insurance indemnities adjust to market conditions over time. If prices systematically decline, the potential indemnity also declines. Farm program payments under the ARC-CO program are capped, and they decline as market prices increase. So in contrast to the most recent direct payment program that resulted in a pre-specified amount of income and cash irrespective of market prices, under the current program higher prices may result in more income from the market and less from the government in many circumstances (a “dead zone”). Also, it is important to note that cash payments from the ARC-CO program are not received until approximately a year after the crop is harvested, so they are not available to meet cash flow requirements in the year of actual production.

Given these characteristics of the safety net, how effective will it be in buffering the financial stress that crop farmers are currently facing? The numerical analyses below provide insight into the answer to that question. 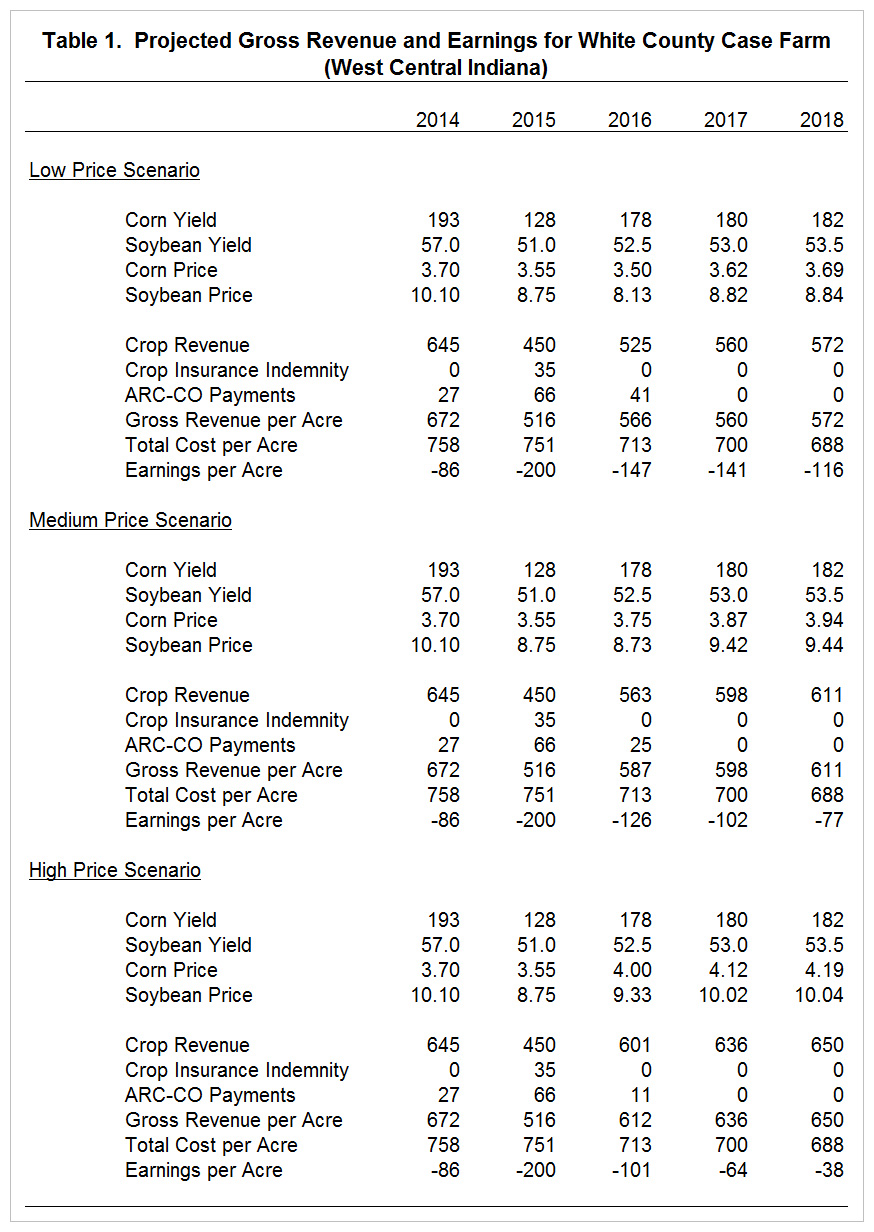 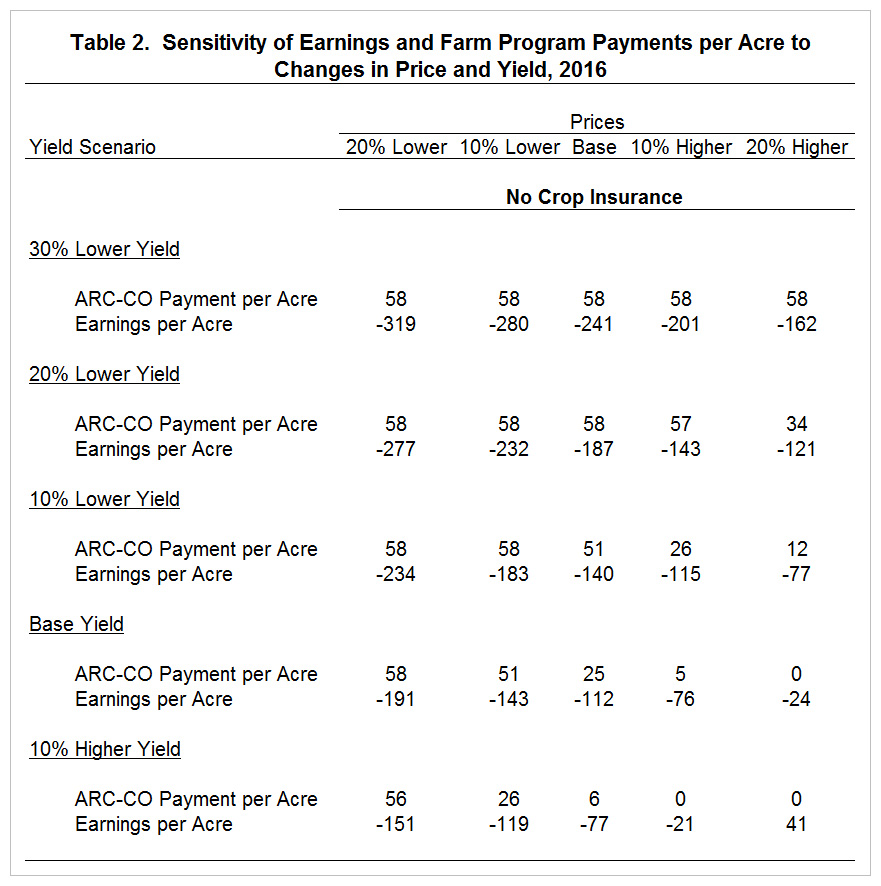 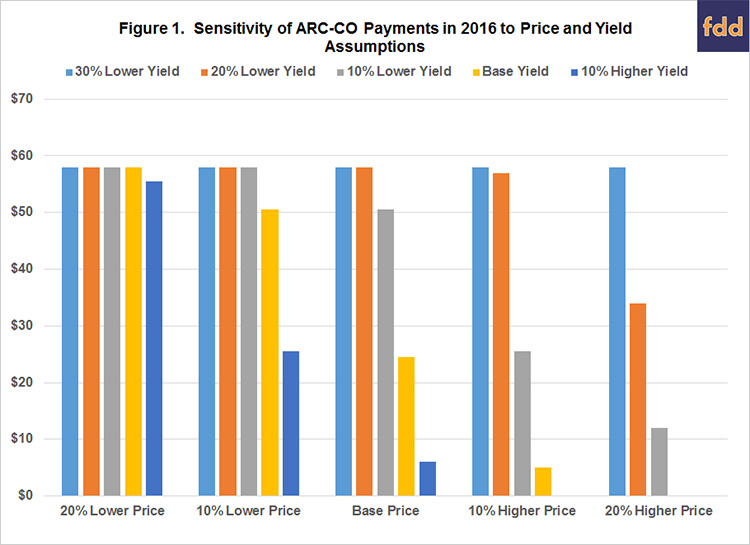 Sensitivity of ARC-CO Program Payments to Prices and Yields

Sensitivity of Farm Safety Net to Prices and Yields 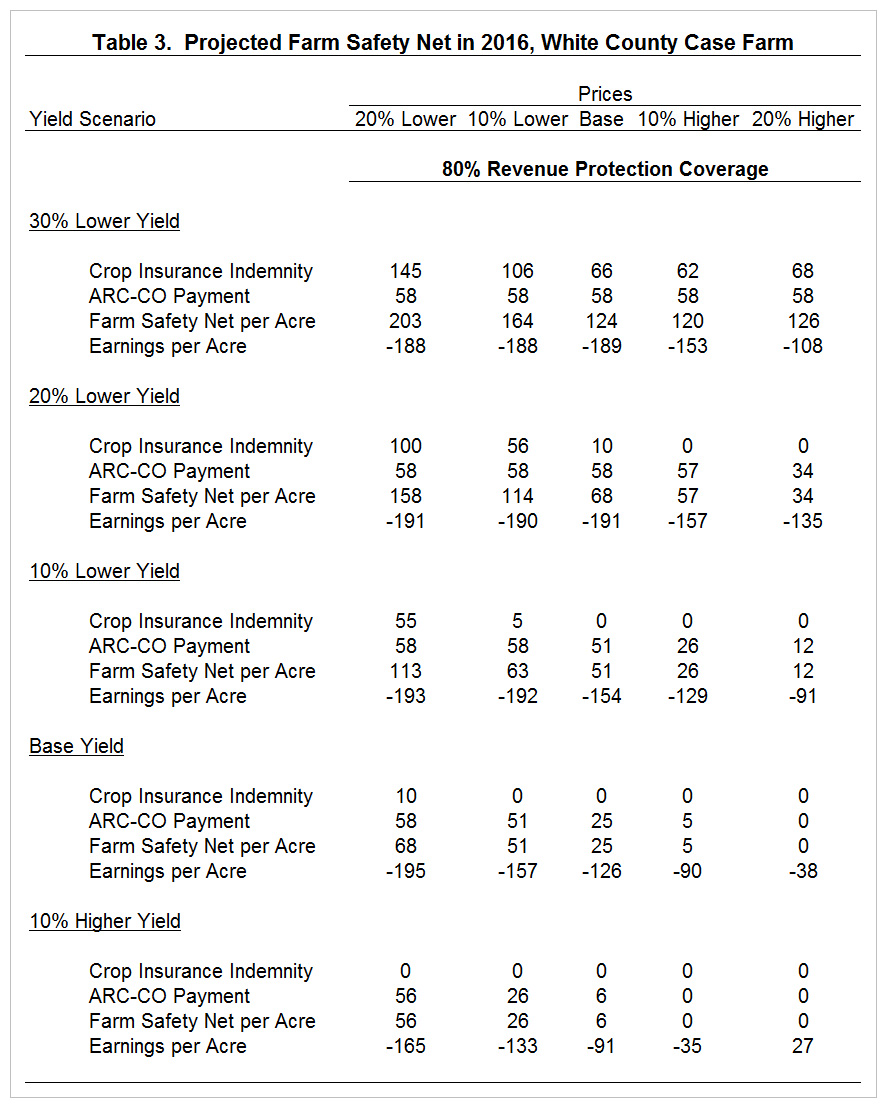 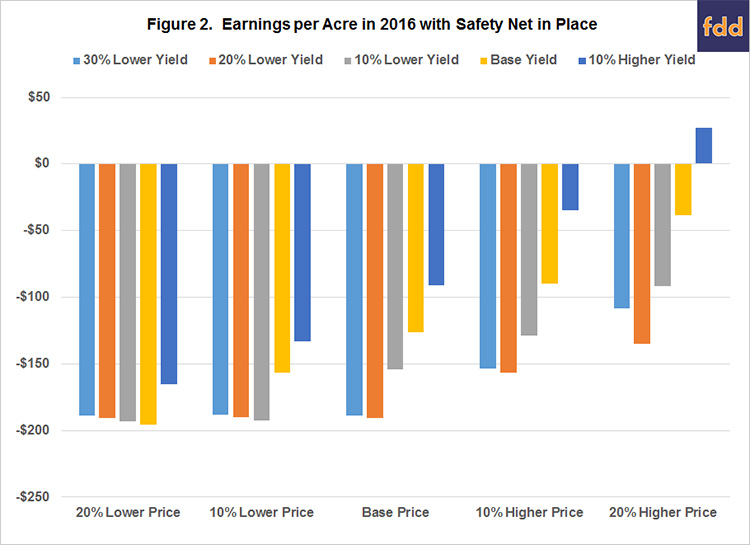 This article examined earnings per acre projections for a case farm in west central Indiana. ARC-CO payments were significantly higher under a low price scenario than under a high price scenario. However, the difference in ARC-CO payments between the two price scenarios did little to stem the increase in red ink between the two scenarios. Moreover, under the price and yield scenarios examined in this paper, annual projected earnings per acre were negative from 2014 to 2018 for the case farm. The results also illustrated the gaping holes in the farm safety net. Even with ARC-CO payments and crop insurance indemnity payments, over one-half of the price/yield combinations examined had negative earnings that exceeded $150 per acre. The decline in the crop insurance revenue guarantee since 2012 has contributed to the large decline in the case farm’s ability to mitigate downside risk, and further adjustment of the ARC-CO payments and crop insurance indemnities to expected future continued weak market conditions suggest that the farm safety net will likely be lowered further in 2017 and 2018.