Since the early 1950s, U.S. acres in corn have increased while decreases have occurred in other cereal crops (barley, oats, rice, rye, sorghum, and wheat). These acreage changes likely are related to the greater growth rate in corn yields as compared to the yields for other crops. As has happened in the past, crop production likely will become more concentrated if differential yield responses continue to exist across crops.

USDA typically designates nineteen “principal crops” grown in the United States (see page 5 of NASS Acreage report). Of these nineteen, seven are cereal crops: barley, corn, oats, rice, rye, sorghum, and wheat. Cereals are high in energy, often providing calories in the diets of humans and animals. As such, these grains can substitute for one another, particularly in livestock diets. In the following sections, changes in yields, harvested acres, and prices are compared across crops.

All data were obtained from the National Agricultural Statistical Service (NASS) and represented values for the United States. Averages were calculated for the five years at the beginning of each decade starting with the 1950s and ending with the 2010s. Then each decade average was divided by the average from 1950-54. As a result, the 1950-54 values for yields (panel A of Table 1), acres harvested (panel B), and prices (panel C) for all crops equal 1.00. This normalization process allows easy comparison of changes across crops over time. 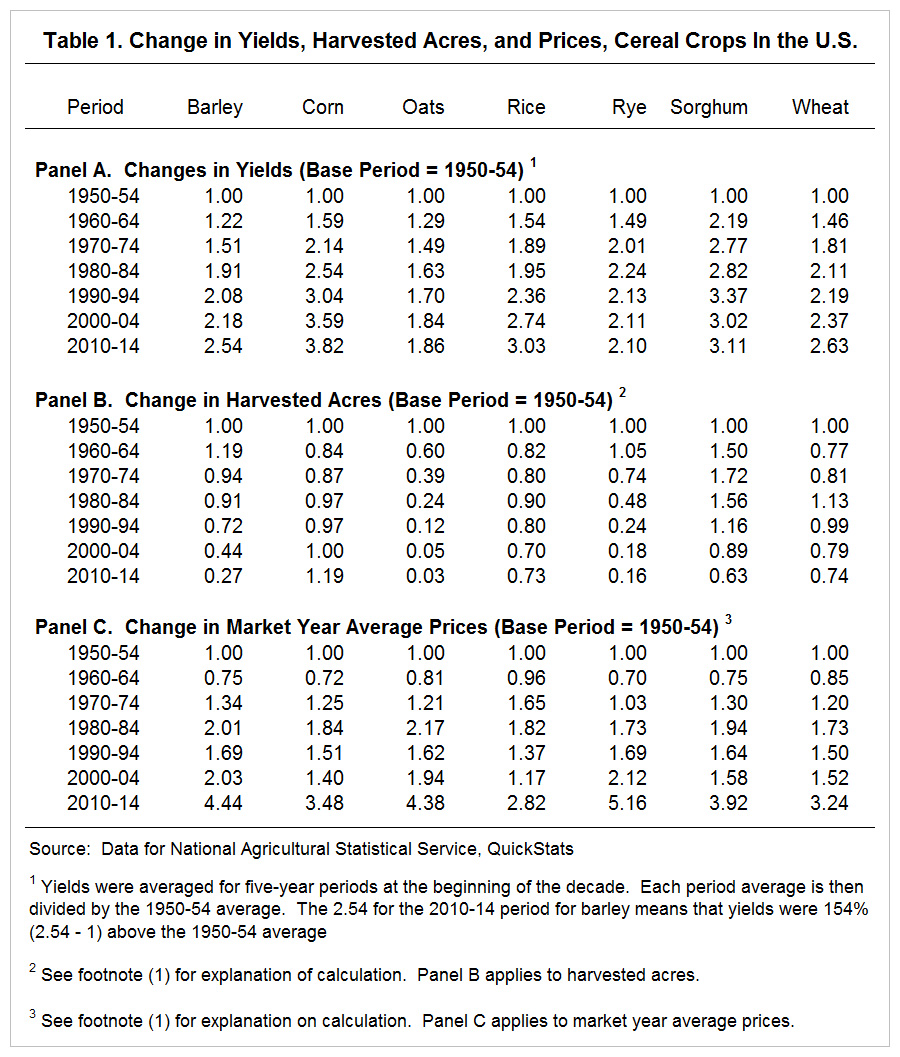 Panel B shows values for harvested acre changes. Corn has a value of 1.19, indicating that acreaged increased 19% in 2010-14 as compared to 1950-54. Corn is the only crop with an increase. Acres in all other cereals declined. Overall, total acres of these cereal crops have decreased. There were 384 million of cereal crops in the 1950-54 period. Total acres declined by 27% to 281 million acres in the 2010-14 period.

There is strong, positive correlation between yield increases and acreage changes. Following is a rank order or yield and harvested acre changes in 2010-14. 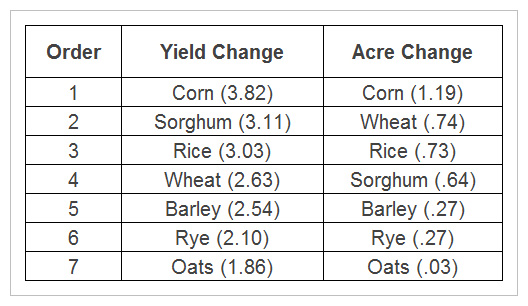 These rank orders are remarkably consistent, with only sorghum and wheat switching second and fourth places.

Many of these cereal crops have specific uses none of the other grains can provide. For example, wheat is used to make flour and the other cereal grains are imperfect substitutes for making the flours that predominate in the United States. Wheat likely will always be produced for this flour demand. However, all of these crops also substitute for one another. The other crops could substitute for wheat in livestock diets. In livestock diets, costs are important in determining use.

The above analysis illustrates a positive correlation between yield and acreage changes, and a negative correlation between yields changes and price changes. Correlations do not imply causality, but these relationships do have an economic rationale. Crops with higher yield increases likely have lower costs than crops with lower yield increases because fixed costs are spread over more production. Lower costs then make the crop more competitive, leading to more use of the crop’s production in end use, leading to acreage increases. However, the price for the higher yielding crop does not have to increase as much to induce more production due to the lower costs.