Reasonably accurate estimates of 2015 ARC-CO payments are contained in May 27th farmdoc daily article. Compared to 2015 payment estimates, projections of 2016 ARC-CO payments are much less certain because little is known about how county yields will differ from expectations and a wide range of prices could occur in 2016 and 2017. Even given the uncertainties, we estimate 2016 ARC-CO payments because these payments could be important cash flows in 2017 if commodity prices remain low. Herein, ARC-CO payments for 2016 are projected using yields at trend levels and prices at the midpoint of World Agricultural Supply and Demand Estimate (WASDE) ranges. At trend yields and mid-point prices, significant payments will occur for corn, soybeans, and wheat across the United States. As described in the final commentary section, the reasons for these large payments are the current low estimates of prices for the 2016 marketing year.

Figure 1 shows the calculations of ARC-CO payments for LaSalle County, Illinois using the ARC-CO PLC Payment Estimator, a Microsoft Excel spreadsheet available in the FAST section of farmdoc (click here for download). The 2016 payment is estimated at $73.70 per base acre and is made using a: 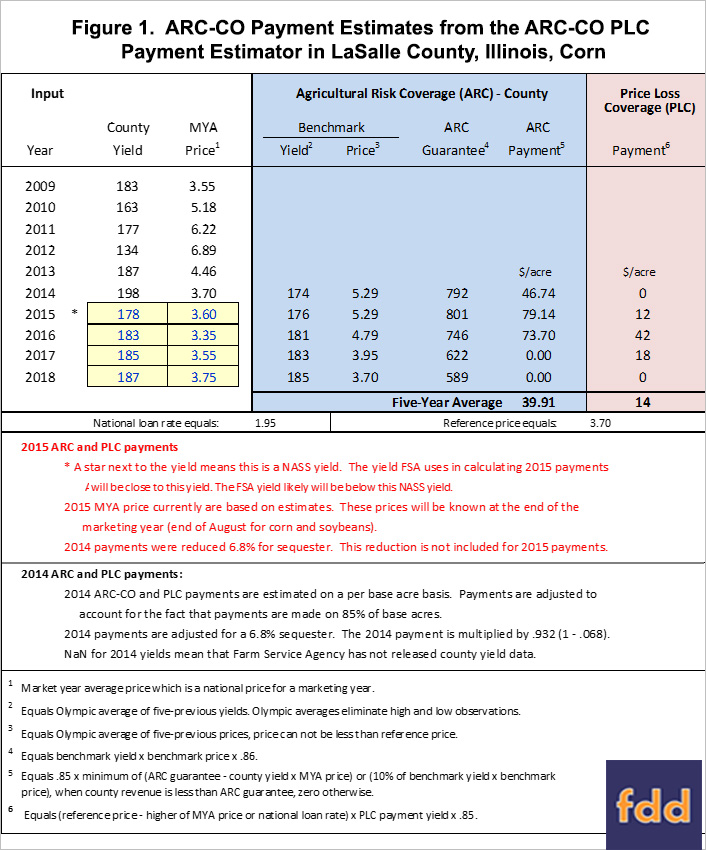 At trend yields and a $3.35 price, most counties in the U.S. would receive ARC-CO payments (see Figure 2). ARC-CO payments from $40 to $80 per base acre would predominate across the United States. All counties use the same market year average prices in the revenue calculations, but county yields will vary from there historical averages. As a result of this variation, ARC-CO will vary across counties. 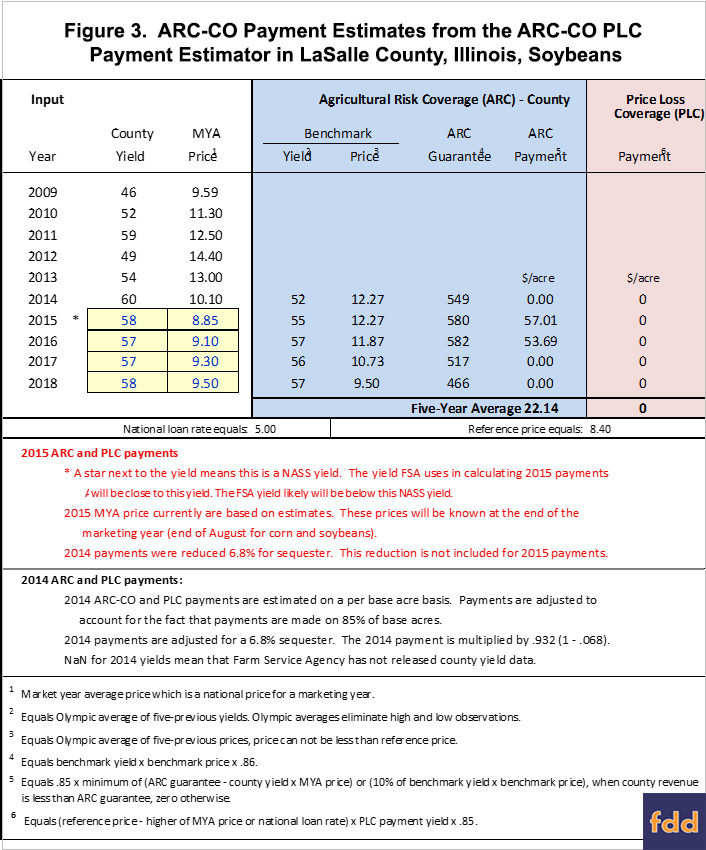 At trend yields and a $9.10 MYA price, many counties in the U.S. would receive ARC-CO payments in 2016 (see Figure 4). Payments in the $30 to $60 per base acre range would predominate across the United States. 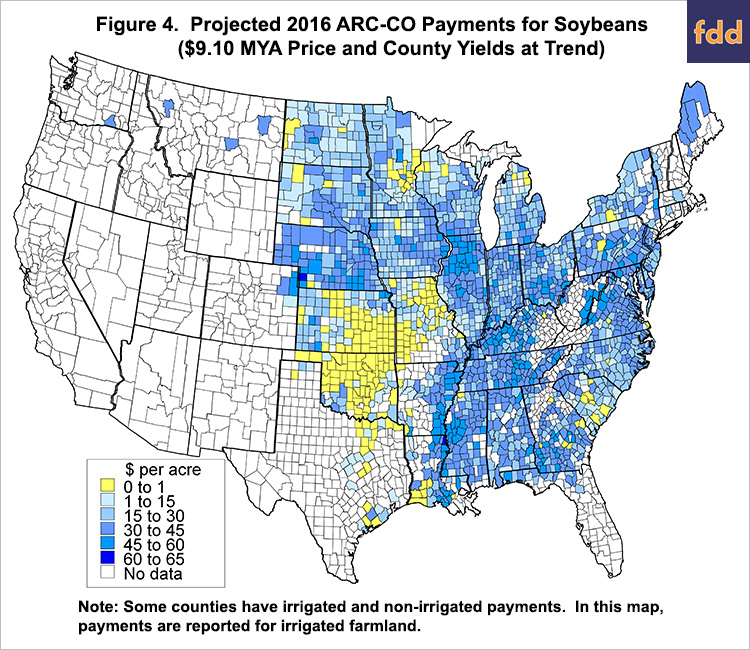 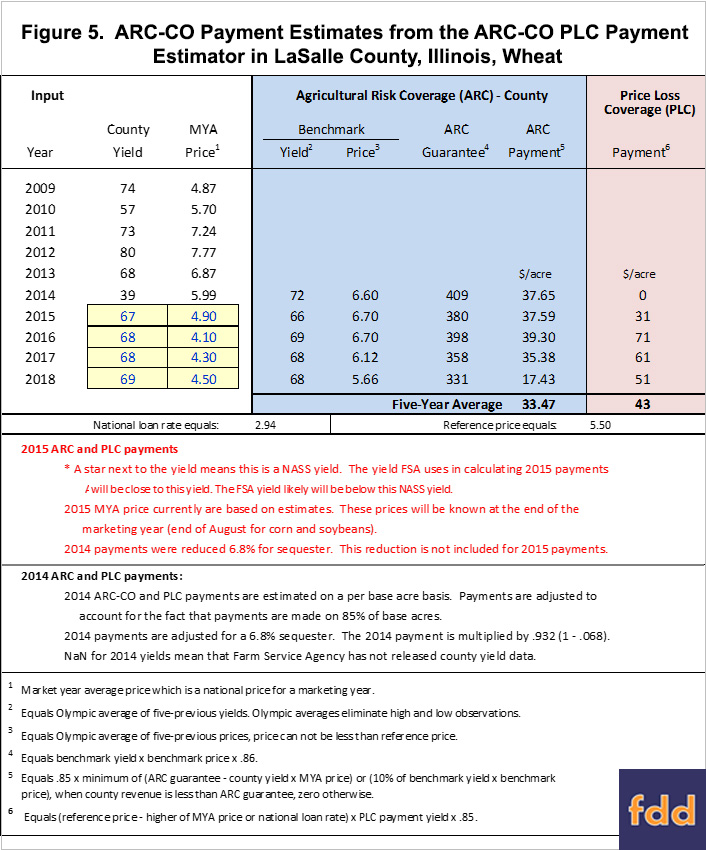 At this point, there likely is some optimism that 2016 wheat yields will be above average. At the $4.10 mid-point price, the maximum ARC-CO price will be received until county yield is above 85 bushels per acre, 17 bushels higher than the 68 trend yield. County yield would have to be above 96 bushels per acre before an ARC-CO payment is not received at the $4.10 mid-point price. 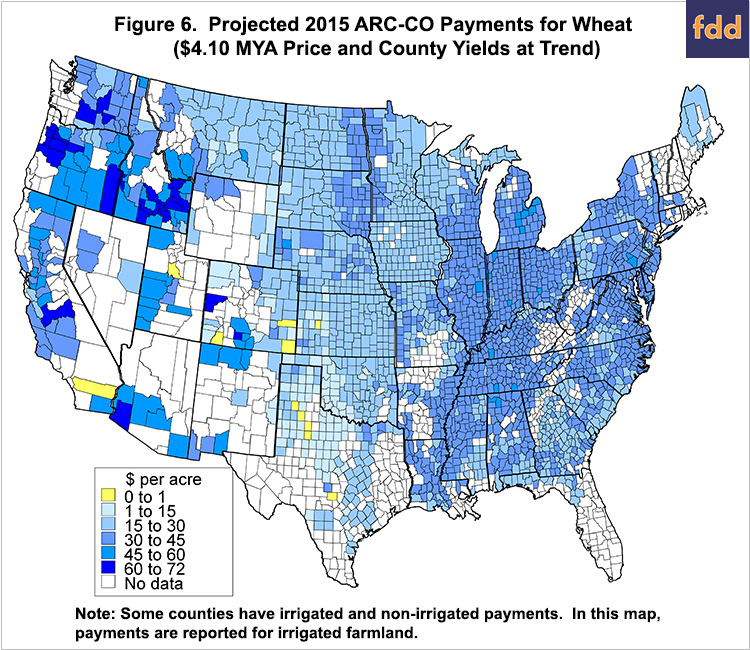 Continued decreases in prices are the main reason for the relatively high ARC-CO payment estimates. The $3.35 MYA price estimate for corn in 2016 is $.25 per bushel below the 2015 estimates of $3.60 per bushel. Higher prices will result in lower ARC-CO payments. Currently, the corn and soybean MYA prices are well below harvest-time bids for 2016 fall delivery grain. This suggests USDA is expecting price declines moving into the fall of 2016.

If payments occur, the 2016 ARC-CO payments projected in this article will be received in the fall of 2017. Much can happen between now and then. The 2016 MYA prices for corn and soybeans are determined based on average prices U.S. farmers receive from September 2016 through August 2017. Actual payment amounts will depend on the level of 2016 average county yields.

As occurred in 2014, ARC-CO payments will be impacted by county average yields. The maps shown in Figure 2, 4, and 6 suggest that payments will be relatively the same across counties. Our calculations use trend yields while actual yields will vary from trend yields even if the national yield is near trend. There will be variability in 2016 as there was in 2014 (click here for maps) and projected to be in 2015 (click here for maps). Those areas that experience higher yields relative to historical yields will receive relatively low ARC-CO payments and some may not trigger payments if the yields lift actual revenue above the 86% guarantee. Those areas experiencing low yields relative to historical yields will receive higher payments.

Given the MYA used to generate ARC-CO payments, incomes will be very low. Negative 2016 incomes would result at these prices even considering 2016 ARC-CO payments (farmdoc daily, April 26, 2016). Therefore, these payments should not be viewed as eliminating the need to reduce cash flow now or through 2017. At best, these payments provide some temporary cushion as farmers continue to cut costs.