Figure 1 shows anhydrous ammonia prices for each year from 1960 to the present. These data are from the USDA and represent a national price in either March or April of the given year. Data from 1960 to 1969 were taken from Fertilizer Use and Price data available from Economic Reporting Service. From 1970 to 2014, data were obtained from Quick Stats, a data retrieval website containing data published by the National Agricultural Statistical Service (NASS). NASS has not published prices for 2015 or 2016. U.S. prices were estimated using Illinois prices published in the Illinois Production Cost Report, a publication of Agricultural Market Service. These Illinois prices were adjusted to reflect national prices based on historical relationships. 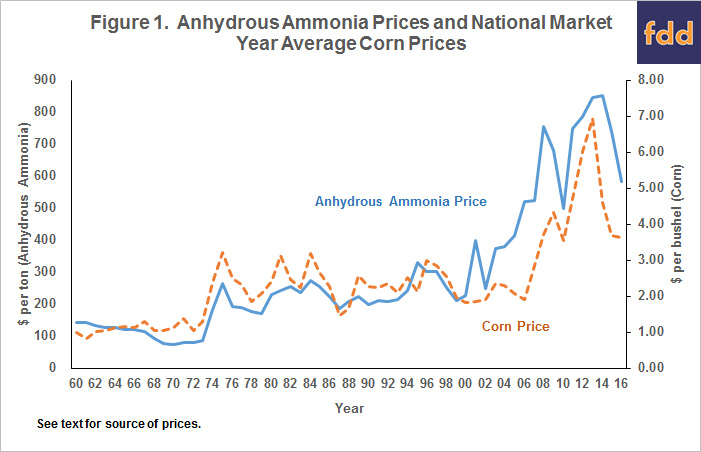 Figure 1 also shows U.S. corn prices. These corn prices are the average of monthly NASS price from September of the previous year to February of the current year. The 2016 price, for example, averages monthly prices from September 2015 to February 2016. These constructed prices are very similar to the Market Year Average (MYA) prices reported by NASS. The constructed price is based on prices during the first six months of the marketing year rather than the entire marketing year. These prices using the first six months were constructed so that the corn price was determined before the anhydrous ammonia price shown in Figure 1. From 1960 to 2015, the constructed price averaged $.05 per bushel less than the market year average price. The two price series had a .99 correlation coefficient.

For the 1960-2016 period, the correlation coefficient between ammonia and corn prices was .86. Several rationales can be given for this high correlation. All commodity prices tend to be correlated as many of the same economic factors impact all commodities. Moreover, corn price serves as an indicator of demand for nitrogen fertilizer, with higher prices likely indicating more corn acres and the need for more nitrogen. 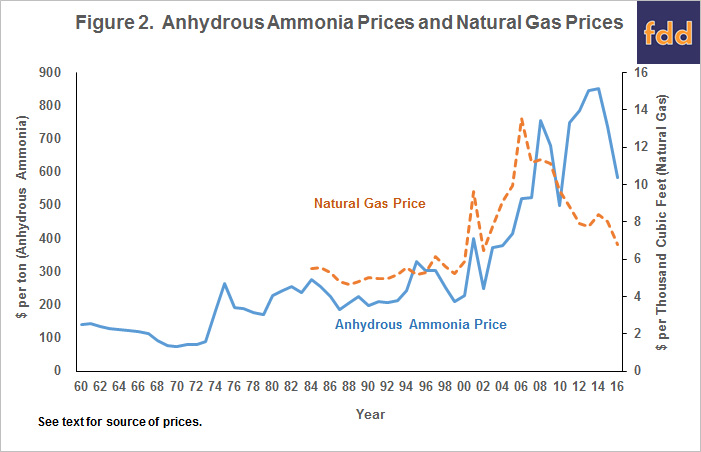 Since the 2006 high, natural gas prices have been on a downward trend, reaching low of $6.78 per thousand feet in 2016 (see Figure 2). Since 2006, natural gas prices decreased by 50%. This later period of price decreases occurred as new sources of natural gas became available due to fracking.

Before 2006 when natural gas prices when stable or rising, anhydrous ammonia and natural gas prices moved together closely. The correlation coefficient between natural gas and anhydrous ammonia prices was .92 for the 1984-2006 period. This tight relationship has not existed since 2008. To illustrate, the correlation coefficient from 1984 to 2016 was .67, down considerably from the .90 value for the 1984-2006 period. 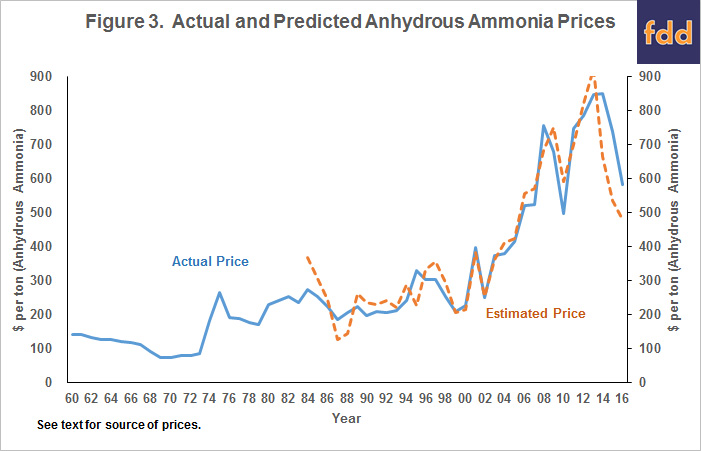 Two questions then arise. Why did anhydrous ammonia prices not decline more since 2014? Various arguments can be given. Perhaps there is a change in the regulatory environment leading to cost increases in anhydrous ammonia production. Prices of agricultural inputs may have a tendency to rise easier than they fall. Input prices take more time to adjust downwards.

A second related question is: Will anhydrous ammonia prices “catch up” to estimated prices by decreasing more in the coming year? This is an imperative question for farmers as they continue to look for ways to reduce costs, thereby arriving at a point where costs are lower than revenue. Time will tell whether ammonia prices continue to decrease into 2017. Farmers may wish to consider two items for 2017. First, a switch to more soybeans and less corn may be warranted. Soybeans do not use nitrogen fertilizer and have been more profitable than corn in recent years (farmdoc daily, February 16, 2016). One reason ammonia prices did not decrease as much in 2016 as projected may be because of the surprisingly large 2016 corn planting intentions. Moving acres out of corn will reduce demand for nitrogen fertilizers, putting downward pressure on ammonia prices. Second, farmers may need to continue to evaluate ways of reducing nitrogen fertilizer inputs.