Mandates for second-generation biofuels in the US create potential markets for farmers to collect and market their corn stover biomass. Removing stover from the field has the potential to reduce organic matter and nutrients available in the soil, while increasing the potential for soil erosion. Furthermore, there are concerns that the potential to sell stover might impact farmers’ crop rotations and tillage practices, potentially leading farmers to switch from corn-soybean to continuous corn rotations. Since continuous corn production may lead to lower per acre yields and require more nitrogen application per acre than corn grown in rotation with soybeans, this change in production practices has the potential to increase nitrate run-off.

In the farmdoc daily article posted on February 18, 2016, we discussed the economics of harvesting corn stover, providing some specific examples for Illinois from the Biomass Crop Budget Tool for Corn Stover (available for download as part of the farmdoc FAST suite here). Today’s article provides maps illustrating breakeven stover price estimates for rainfed US counties (east of the 100th meridian) included in the budget tool, and further discusses how breakeven corn stover prices differ with crop rotation and tillage practices.

The breakeven stover prices illustrated in the maps below represent the corn stover price that would need to be received by the farmer to cover the costs associated with harvest/collection, storage, as well as the additional costs needed for nutrient replacement. These farmgate breakeven prices do not include any change in profits from corn production due to stover harvest or change in corn production practices.

We find, in general, that breakeven stover prices tend to be lower in areas with greater corn yield potential since the amount of stover biomass produced is assumed to be proportional to grain yield. Removing more stover per acre reduces breakeven prices by spreading the fixed costs associated with harvest, and storage over a greater number of tons of biomass.

Harvesting stover reduces organic matter and nutrient levels, and can lead to greater potential for soil erosion caused by water and wind. The proportion of available stover which can be removed from the field (the stover removal rate) which leads to minimal negative impacts varies with tillage practice. Specifically, we assume that 30% of the available stover can be removed under conventional tillage practices while 50% can be removed if no till practices are being used (Scarlat, Martinov, and Dallemand 2010). Crop rotation is also assumed to impact stover yields and breakeven prices via grain yields. In a continuous corn rotation, a corn yield drag will lead to higher breakeven stover prices compared with a corn-soybean rotation. 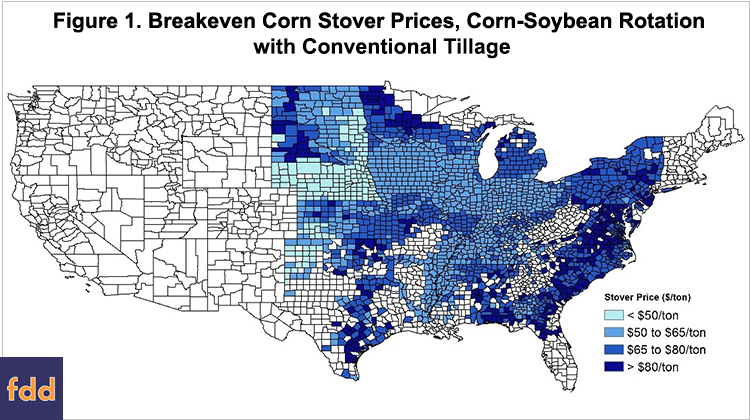 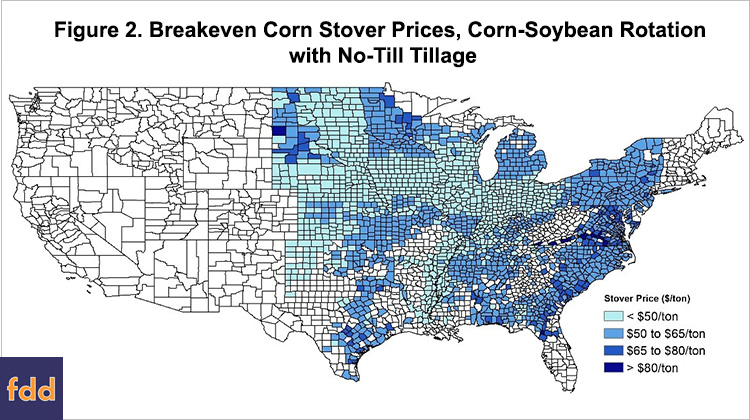 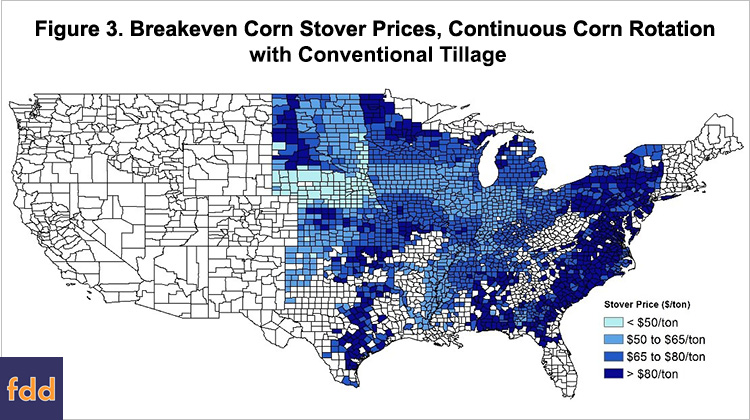 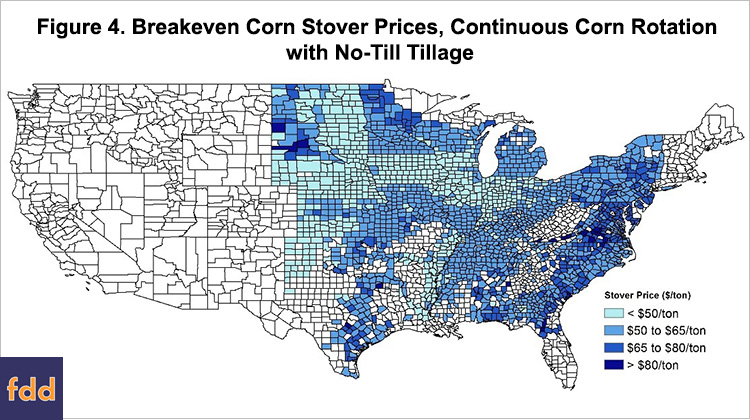 Estimates from the Biomass Crop Budget Tool for Corn Stover suggest that with a given price of biomass, farmers producing corn stover with corn grown in rotation with soybeans using no-till practices may find it more profitable than farmers using other rotation/tillage combinations. As compared to harvesting stover with continuous corn production and under more intensive conventional tillage practices, the advantages for no-till practices are relatively large, reducing breakeven stover prices by $15 to $17 per ton on average, while the advantage for the corn-soybean rotation is relatively small at $3 to $6 per ton. Other than accounting for nutrient loss replacement costs, these estimates do not incorporate any effects of removal of corn stover on future crop yields. Further research is needed to examine the extent to which stover removal, particularly with continuous corn production, may impact yields on the field in future crop years.

Khanna, M., and N. Paulson. "To Harvest Stover or Not: Is it Worth it?" farmdoc daily (6):32, Department of Agricultural and Consumer Economics, University of Illinois at Urbana-Champaign, February 18, 2016.

Scarlat, N., M. Martinov, J. Dallemand. "Assessment of the Availability of Agricultural Crop Residues in the European Union: Potential and Limitations for Bioenergy Use." Waste Management 2010(30):1889-1897.