Over the last ten years, U.S. corn acres grew by 7.2 million acres. However, changes in acres across the United States were not even. High growth areas included North Dakota, South Dakota, Nebraska, Iowa, Kansas, and Minnesota. Growth occurred near and around the western corn-belt while acres in the eastern corn-belt remained relatively stable.

Harvested acres for corn on a county-basis were obtained from the National Agricultural Statistical Service (NASS), an agency of the U.S. Department of Agriculture. These data were summarized into two yearly periods:

Two years were averaged to mitigate differences that may occur in only one year. Differences were taken between the two periods. These periods are ten years apart, causing the following discussion to reflect differences across ten years. 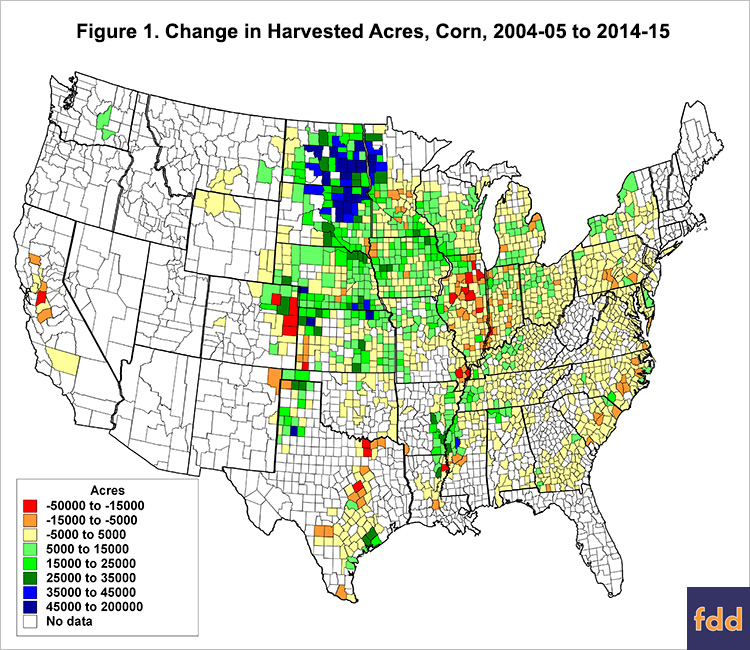 Some states decreased acres. Illinois had the largest decrease of 150,000 acres between 2004-05 to 2014-15. While having the largest acre decrease, Illinois’ decrease only represented a 1% decrease in percentage terms. Other states that lost acres were California, Virginia, Indiana, South Carolina, Colorado, New Mexico, and Maryland.