Area insurance, including county insurance, is championed, particularly by economists, for several reasons including lower administrative cost and a lower potential for cheating. However, payments by area insurance can cover more or less than a farm’s loss. This so-called area-farm loss basis risk has emerged as a topic of interest. Basis risk is usually examined for a single or only a few years due to availability of data. This study takes a longer term perspective. A long term perspective is desirable because it allows over and under coverage for a given year to be averaged over time. In this study, each farm has reported complete data including yield for the same crop in all or all but one year from 1973 through 2012 to farm management programs in the important crop production states of Illinois and Kansas. Even over 35 years, the county-farm loss basis is found to vary widely across the farm observations. This study also finds that caution is in order when using the county-farm correlation to decide between county and individual farm insurance.

Data are available for 185 farm observations as follows: corn in Illinois, 61 farms; soybeans in Illinois, 61 farms; soybeans in Kansas, 28 farms; and wheat in Kansas, 35 farms. Other state-crop combinations have fewer than 20 farm observations, which is questionable for statistical inferences. Revenue per acre at harvest is calculated as the price during the insurance harvest discovery period times the farm or county yield per planted acre during the same crop year (see data notes 1 and 2). Revenue per acre expected prior to planting for the crop year is calculated as the insurance price during the pre-plant price discovery period times the Olympic average of the farm’s or county’s plant yields for the 5 prior crop years (see data notes 3, 4, and 5). Percent change in revenue is then calculated: [(harvest revenue minus pre-plant expected revenue) divided by pre-plant expected revenue]. Insurance prices are from the U.S. Department of Agriculture (USDA), Risk Management Agency and a data set compiled by Art Barnaby of Kansas State University. County yields are calculated using data from USDA, National Agricultural Statistical Service. The farm loss profile for the 185 farm observations in this study is discussed in a July 13, 2016 farmdoc daily article. 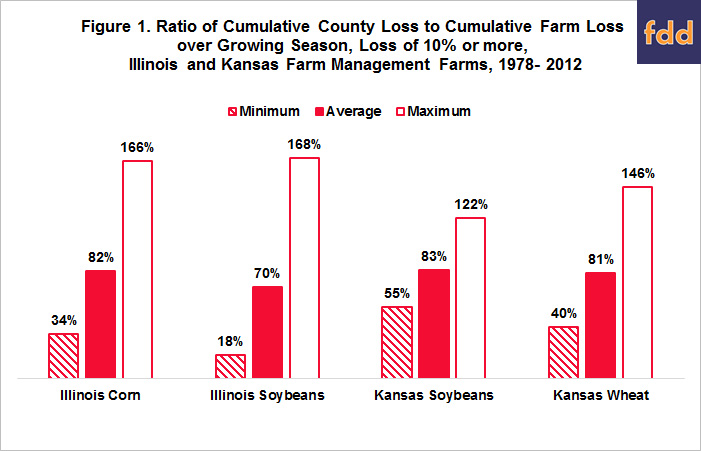 An average county-farm loss basis of less than 100% is expected. The primary reason is that county yield usually varies less than the yield of an individual farm in the county. A county has more acres spread over more varied agro-environments than does a single farm in the county. 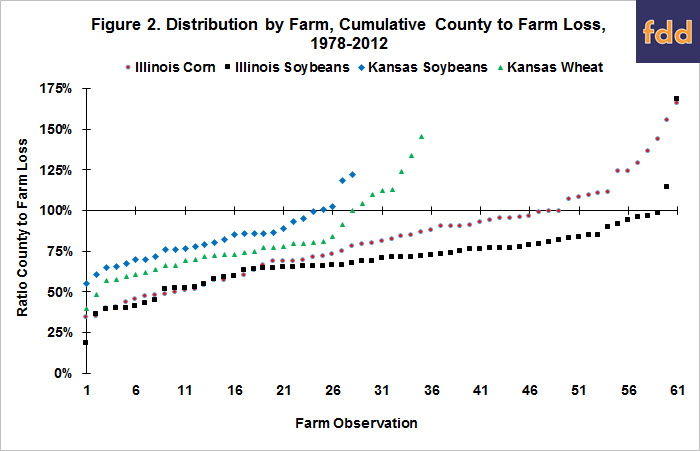 A common observation is that county insurance is more useful when farm and county variability are highly correlated (that is, highly related). To examine this observation in the context of this study, a county-farm correlation is calculated using the percent deviations of harvest from pre-plant revenue for a farm and its county. The county-farm correlation ranges from +0.41 to +0.96, with an average of +0.80 (see Figure 3). Eighty three percent of the correlations exceed +0.70 (perfect positive correlation is +1.00). The averages for Illinois and Kansas are +0.80 and +0.81. Thus, the percent deviation of farm revenue over the growing season is highly related to the percent deviation of county revenue over the growing season for most farm observations in this study. 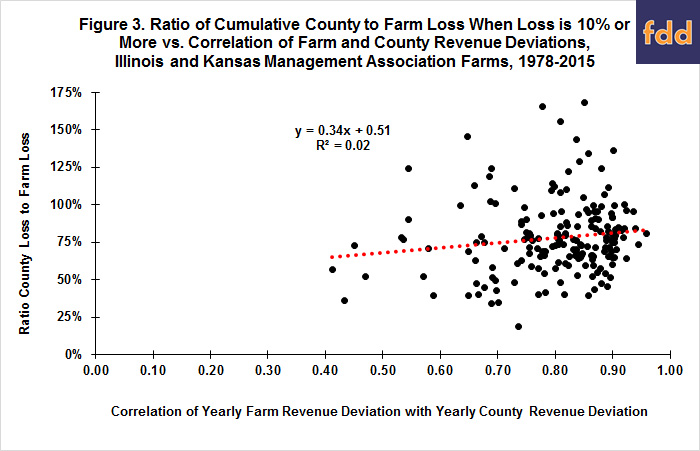