The potential for loss over the growing season is a key risk for crop farmers, and is the primary risk covered by U.S. crop insurance. Growing season loss is commonly examined across farms in a single year. This article takes a different approach. It examines growing season loss for the same farm over 35 years. Specifically, each farm in this study has reported complete data including yield for the same crop in all or all but one year from 1973 through 2012 to farm management programs in Illinois and Kansas. Both the magnitude and composition of growing season losses differ between the two states. In particular, the share of losses that occur in years when loss exceeds 30% is much higher for the Kansas crops. This difference has important policy implications.

Data are available for 185 farm observations as follows: corn in Illinois, 61 farms; soybeans in Illinois, 61 farms; soybeans in Kansas, 28 farms; and wheat in Kansas, 35 farms. Other state-crop combinations have fewer than 20 farm observations, which is questionable for statistical inferences. Revenue per acre at harvest is calculated as the price during the insurance harvest price discovery period times the farm’s yield per planted acre during the same crop year (see data note 1). Revenue per acre expected prior to planting for the crop year equals the insurance price during the pre-plant price discovery period times the Olympic average of the farm’s planted yield for the 5 prior crop years (see data notes 2, 3, and 4). The percent change in revenue is then calculated as {(harvest revenue minus pre-plant expected revenue) divided by pre-planted expected revenue]. The insurance prices are from the U.S. Department of Agriculture, Risk Management Agency and a data set compiled by Art Barnaby of Kansas State University.

Average loss between the pre-plant and harvest periods for years when a loss occurs is approximately twice as large for the Kansas crops (see Figure 1). The range is from -15% for soybeans on Illinois farms to -30% for soybeans on Kansas farms. Larger growing season losses are expected for Kansas crops because the crop production environment is more variable in Kansas. 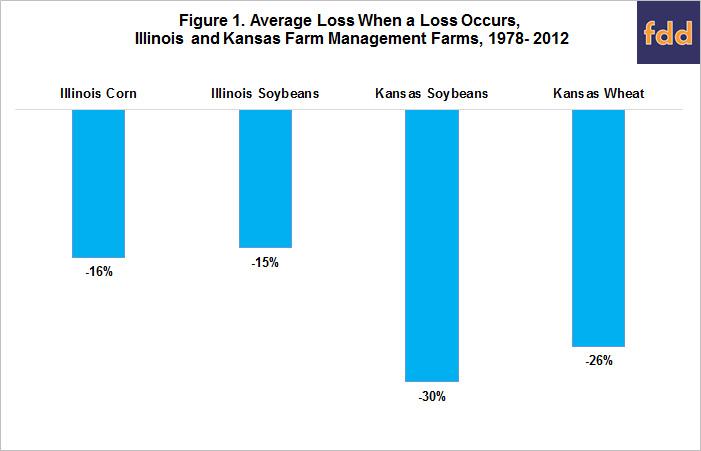 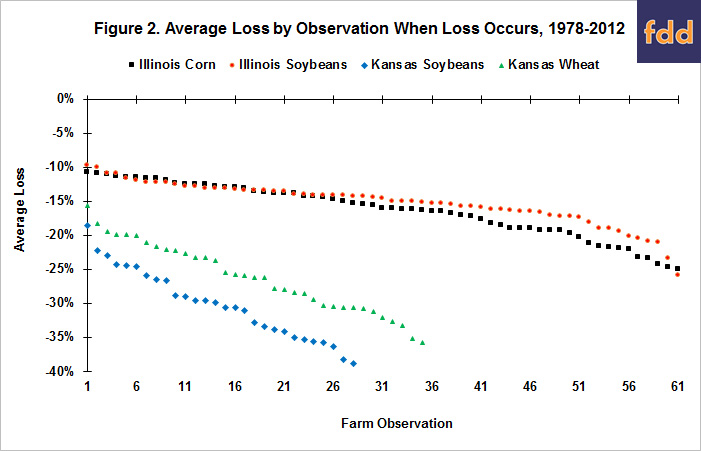 Despite their larger average loss, losses did not occur more often for the Kansas crops. A loss occurred in 50% and 51% of the years for Kansas wheat and soybeans vs. 52% and 60% for Illinois soybeans and corn. The higher share for Illinois corn is in part due to a 2.4% lower average insurance price during the harvest than pre-plant price discovery period (see data note 5). In contrast, the difference in average pre-plant and harvest price for the other 3 state-crop combinations is no more than 0.3%.

Average loss is higher for the Kansas crops primarily because around one quarter of their losses occur in years when loss exceeds 30% (see Figure 3). For the Illinois crops, losses are more concentrated in years when loss is less than 15%: around two-thirds of losses for the Illinois crops vs. less than half of losses for the Kansas crops. The latter finding is important because 15% is the smallest deductible for individual farm insurance. (See data note 6.) 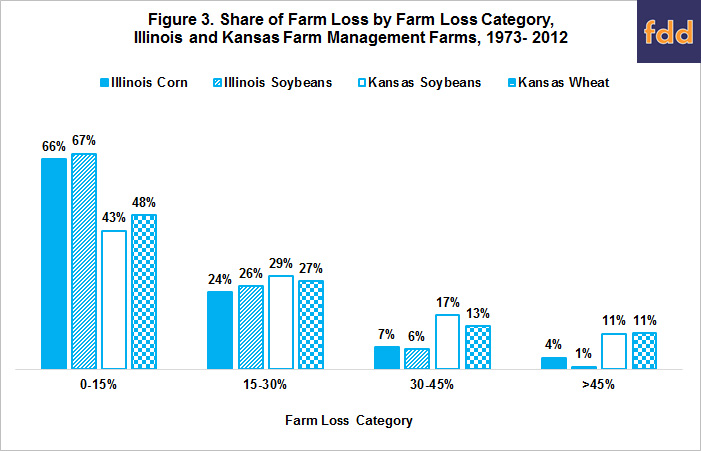