The Agriculture Act of 2014 (2014 farm bill) transformed many of the agricultural programs from the Food, Conservation and Energy Act of 2008 (2008 farm bill). The new law altered many of the commodity (Title I) programs that are tied to historical acres and yields. For example, the 2008 Title I programs included the direct payment program which paid constant amounts regardless of economic conditions. This program came about with the Freedom to Farm Act (aka 1996 Farm Bill). The 2014 farm bill eliminated this type of payment so that programs are more reflective of market conditions (for example, not providing a payment when prices and producer revenue are high).

While the end of the 2014 farm bill in 2018 seems far off, it is likely debate will begin sooner than later. Considering conditions today and looking at different farm bill options from the 2008 and 2014 legislation will provide useful information to inform that debate.

To evaluate changes to land use and government costs, we start by using the FAPRI model to evaluate what would happen with no farm programs at all. We then consider Title I programs and Title XI (crop insurance) programs as well as the conservation reserve program. To isolate the effects of those programs under the two different farm bill vintages, we start by allowing Title I programs, followed by then allowing Title XI programs and finish by allowing CRP enrollment and payments.

The 2008 farm bill contained multiple programs. Direct Payments (DPs) were a fixed, annual payment rate for covered commodities.[1] Counter-Cyclical Payments (CCPs) were made when the price of a covered commodity fell below a fixed level. Both of the programs were tied to historical production through base acres and program yields. There are approximately 242 million base acres in the United States, or 92 percent of total planted acres. Base acres are designated by the crop that had been traditionally grown on them and are fixed, but periodic updates have been allowed. Similarly, program yields are tied to historical yields on a farm and have been updated periodically.

The Average Crop Revenue Election (ACRE) program provided revenue protection based upon actual plantings, albeit still limited by base area. Payments were made only if the state and farm met the loss criteria. If a producer elected to participate in ACRE, he or she had to forego all CCPs, accept a 20 percent reduction in DPs and a 30 percent reduction in the marketing loan rate. Last of all, the marketing loan program protected against low prices on actual production.

The 2014 farm bill eliminated all of the 2008 programs except marketing loans. Instead, producers had to choose between Price Loss Coverage (PLC) and Agriculture Risk Coverage (ARC) for each commodity on a farm. PLC operates like the CCP program except with higher levels of price protection. While ARC has some similarities to ACRE, it has some fundamental differences. Payments are not tied to actual plantings and the version chosen by most producers protects revenue at the county level which has no farm-level loss criteria. If a producer did not choose ARC for a commodity and purchases crop insurance for it, the crop is eligible for the new Supplemental Coverage Option (SCO) crop insurance program. Upland cotton is no longer a program crop but is still eligible for marketing loans. Instead, upland cotton producers have an additional crop insurance program available to them, the Stacked Income Protection Plan (STAX).

In order to compare the effects of the two farm bills, the FAPRI-MU stochastic model was employed. This model produces 10-year projections for U.S. agricultural markets, government costs and farm income. Instead of a single estimate for each variable, a distribution of outcomes based upon probabilities is generated to help capture the uncertainty inherent in the sector. The distribution is formed by considering ranges of possible economic growth rates, interest rates, oil prices, weather outcomes, and other factors.

The 2014 farm bill is currently built into the FAPRI-MU projections. For the 2008 farm bill scenario, the policy changes are introduced into the model starting in the 2016 crop. ACRE participation is assumed to be the same as they were before the 2014 farm bill went into effect, as are CCP yields, DP yields and base acres. Only crop policies were changed and the Conservation Reserve Program (CRP) is excluded in this scenario. Livestock and dairy programs were consistent with the 2014 farm bill. 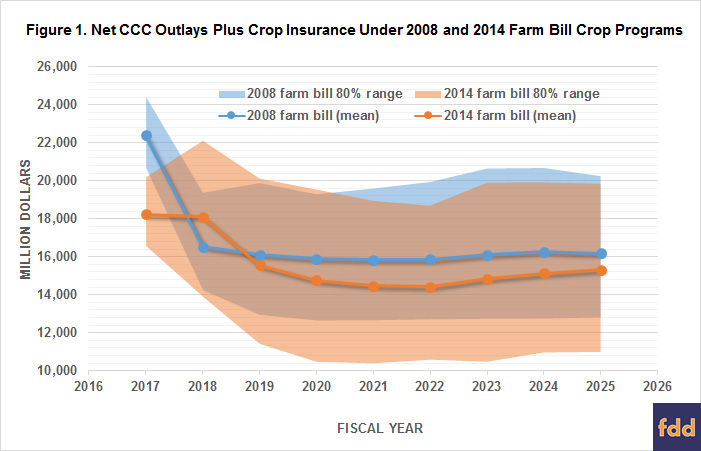 The shaded areas represent the 80 percent inner range of results. 10 percent of the model outcomes are above this area and 10 percent below. The approximate similarity at the upper end of the ranges indicates that both the farm bills can generate similar levels of expenditures if market conditions trigger substantial payments. However, the 2014 farm bill tends to have a lower end. The 2008 farm bill DPs are fixed, so expenditures never fall below a certain level. Since the 2014 farm bill programs are tied more closely to current market conditions, they tend to be more volatile.

Changes in government programs will affect potential returns to producers. The key question when considering land use effects is how closely payments are tied, or coupled, to production decisions. The more closely coupled, the more that a dollar in government payments affects production. This is not an either/or description, but one that varies in magnitude. A producer may not only change production to receive subsidies, but also may have different attitudes towards risk and different budget constraints. As a result, the total dollar amounts are not the only determinant of acreage shifts.

Under the 2008 farm bill, DPs were nearly fully decoupled: the payment amount did not depend on market conditions and payments were tied to historical base area. However, producers receiving DP’s may have had a larger budget to work with, thereby allowing for more production and less absolute risk aversion as liquidity constraints were eased. DPs would then have some impact on area allocated to crop production, but a dollar of government payments would have much smaller impact as compared to a dollar of market returns.

In contrast, ACRE payments were tied directly to actual plantings, although still limited by historical base area and consequently not fully coupled to production. CCPs fell somewhere in the middle. ARC and PLC have broadly similar criteria to CCPs and similar degrees of decoupling from production decisions.

The different factors driving program payments can affect the incentives to plant specific crops, as shown by the reallocation of planted area (Table 1). Much of the difference between the two farm bills is observed in wheat and upland cotton area. Most wheat producers in the 2008 farm bill scenario did not participate in ACRE. Wheat CCPs were small so there were few payments other than DPs to those producers. However, in the 2014 farm bill scenario, participation is divided between ARC and PLC. While the former program would make some payments in the projection period, the latter program pays enough on average to draw more area to wheat. Upland cotton is not a program crop in the 2014 farm bill, so adding the programs has a much more muted effect, although still positive because of marketing loans, as compared to the impact of the 2008 farm bill. Cotton is eligible for STAX which is a coupled payment, so when crop insurance changes are added, both farm bills have similar impacts on upland cotton acreage. Adding either combination of payments tied to base area, whether defined by 2008 or 2014 farm bill, decreases corn and soybean area, on average, because the weight of payments and their relative decoupling drive producers to allocate land away from these two crops. Adding crop insurance leads to a small increase in corn area under either farm bill, but average soybean area impacts remain slightly negative. 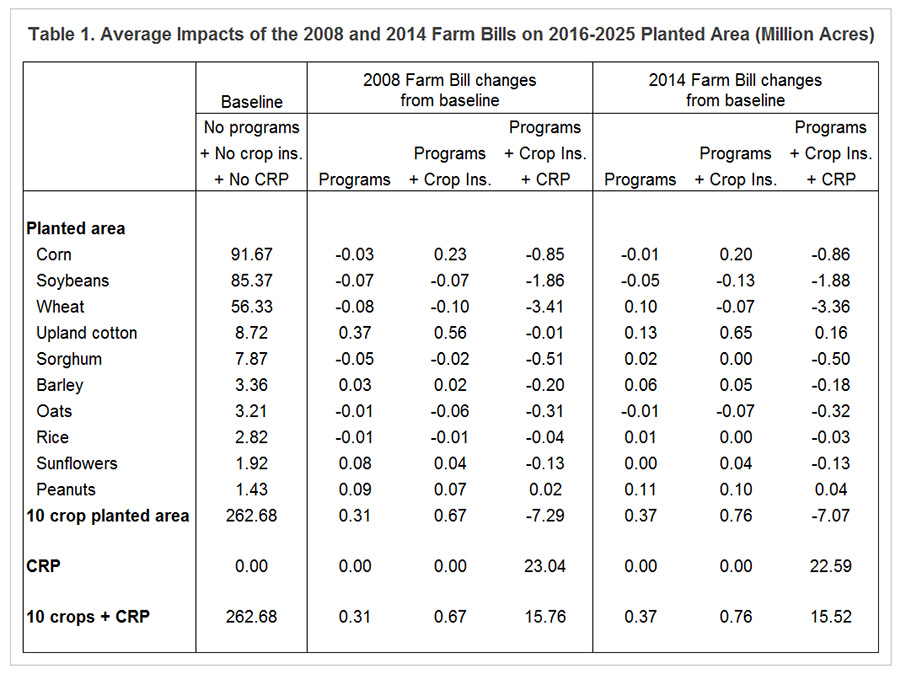 Adding CRP results in large changes. Wheat takes almost half of the total change in planted area shown, but many crops that might be affected by CRP enrollment are not shown. The total CRP area between the two farm bills is almost the same even though the 2008 farm bill has a much higher enrollment cap. This is due to the assumption that the CRP rental rates are not increased to meet the higher cap. Instead, the rental rate changes are driven by changes in crop returns.

The area planted to these ten crops is almost the same without any crop programs, the 2008 programs, or the 2014 programs, as seen by the additional .31 million acres for the 2008 farm bill and .37 million acres for the 2014 farm bill. Without any CRP effects, the 10 crop planted area with programs and crop insurance is changed by less than 0.3 percent. The small overall impacts follow from three factors. First, many crop programs tend to be decoupled so they do not have a large impact on producer incentives to plant. Second, even for the programs that are more closely tied to output, the potential to expand total crop area is constrained by competing uses of land and the limited amount of land suitable for crop production. Third, although a farm bill can add billions of dollars in government expenditures, these amounts remain much smaller than market returns, so area decisions respond primarily to expected market prices and costs.

The two farm bills have broadly similar effects on government expenditures, but not identical. Expenditures can be on the order of $20 billion in either case, but the fixed payments of the 2008 farm bill set a minimum level of expenditures. Despite the billions of dollars paid, the overall acreage effects of adding programs from either farm bill are small, on average, and the differences between the two farm bills are even smaller. By comparison, the CRP program changes area by a much larger amount. However, the total acreage effects can mask reshuffling among individual commodities, which generally results in greater cotton and peanuts, but less wheat and soybeans. Nevertheless, given that many of these payments are partly decoupled from production decisions and all payments are much smaller than total market returns in every case, plus the near inflexibility of total land used for crop production, the overall production and market impact of these programs remains limited.