U.S. farmers increased corn planting in 2016 by 7% while soybean planting only rose 1%. These relative changes come after three years in which soybeans have been more profitable than corn in Illinois, suggesting soybean acres should have increased more than corn acres. In 2016, crop return projections made in February did not suggest a large shift to corn acres (see farmdoc daily, February 16, 2016). June projections of 2016 crop returns indicate that soybeans will be more profitable than corn in 2016. Given this history, farmers may wish to consider switching acres from corn to soybeans in 2017, particularly on acres where corn follows corn. Obviously, 2017 prices and cost projections will impact the advisability of this switch. As benchmarks, soybeans likely will have higher returns than corn in 2017 if 1) 2017 corn prices are below $4.00 or 2) non-land costs for corn do not decrease substantially.

Profitability of Corn and Soybeans

Since 2013, soybeans have been more profitable than corn for two fundamental reasons: 1) non-land costs for corn increased more than soybean costs since 2006 and 2) commodity prices decreased in 2013. In central Illinois, non-land costs for corn increased $288 per acre from 2006 to 2015. During this same period, soybean non-land cost increased by $156 per acre. As a result, corn costs increased by $132 per acre more than soybean costs. In and of itself, higher cost increases for corn reduce the relative profitability of corn versus soybeans. 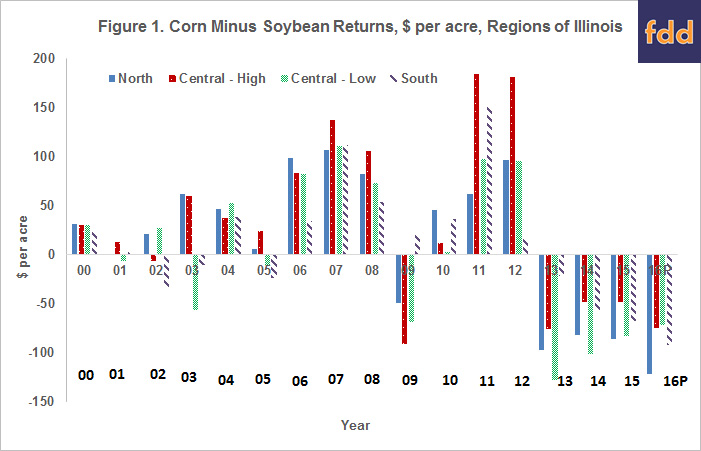 Several factors could again cause corn to be more profitable than soybeans in 2017. Two of the more likely are:

A combination of the above two items also could cause corn to be more profitable than soybean. As always, relative yields will play a role in profitability differences between the crops

The relative profitability of corn versus soybeans comes into focus currently because of the increased acreages planted to corn in 2016. In its June 2016 Acreage report, the National Agricultural Statistical Service (NASS) reported that 94.1 million acres of corn were planted in 2016, 7.0% higher than the 88.0 million planted in 2015. At the same time, soybean acres in the U.S. only increased 1.0% from 82.7 million acres in 2015 to 83.7 million acres in 2016. Given the relative profitability of the two crops in recent years and the projections of returns made earlier in the year, one would have expected more of an increase in soybean acres and less of an increase in corn acres.

As 2017 planting decisions begin to be made this fall, farmers may wish to evaluate their relative corn and soybean plantings, perhaps shifting acres from corn to soybeans. In Illinois, acres planted in 2016 were 11.7 million acres of corn and 9.9 million acres of soybeans, suggesting that many Illinois farmers plant corn-after-corn on a portion of their acres. Switching these acres to soybeans may result in higher returns (see corn-after-soybeans and corn-after-corn budgets in 2016 Illinois Crop Budgets).

Prices and costs will obviously impact these decisions. Soybeans likely will be more profitable than corn if projected corn prices are below $4.00 per bushel, given that historical soybean-to-corn price relationships hold. Sizable reductions in corn seed prices and nitrogen prices also could impact planting decisions.

The large increase in corn acres in 2016 also may be influencing input prices. Seed and fertilizer costs are considerably higher for corn than for soybeans. Hence, the revenue to input manufacturers will be higher if acres switch to corn. Recent corn acreage increases reduce incentives to lower input prices as acreages are increasing without making substantial cuts in input prices.

Given recent price decreases and improving crop outlook for the Midwest, one cannot be very hopeful for commodity price relief to occur this autumn (farmdoc daily, July 5, 2016). All of this will come into clearer focus in the next several months as the level of 2016 yields becomes more certain. Given relatively good yields, prices below $4.00 for corn could continue into 2017. If this is the case, the need for cost cutting will continue to be of great importance. Moreover, planting and cash rent decisions for 2017 will need to be made with great care.

The author would like to acknowledge that data used in this study comes from the local Farm Business Farm Management (FBFM) Associations across the State of Illinois. Without their cooperation, information as comprehensive and accurate as this would not be available for educational purposes. The Illinois FBFM Association, which consists of 5,500 plus farmers and 60 professional field staff, is a not-for-profit organization available to all farm operators in Illinois. FBFM staff provide on-farm counsel coupled with recordkeeping, farm financial management, business entity planning and income tax management. For more information, please contact the Illinois FBFM Office located at the University of Illinois Department of Agricultural and Consumer Economics at 217-333-5511 or visit the FBFM website at www.fbfm.org.