Payments for the 2015 Agricultural Risk Coverage at the county level (ARC-CO) program will provide much needed funds for many farmers with short cash flows. These payments will be made after October 1st. At this point, not all data needed to calculate ARC-CO payments are available; however, reasonable estimates of payments can be made for those counties in which the National Agricultural Statistical Service (NASS) provides county yields. Maps showing corn and soybean level of payments across the United States are given in this article, thereby updating 2015 ARC-CO estimates from a May 27th farmdoc daily article (farmdoc daily May 27, 2016) using more up-to-date estimates of market year average prices.

ARC-CO is a county revenue program that makes payments when county revenue is below a benchmark guarantee see (farmdoc daily February 20, 2016) for a description of ARC-CO payments. To estimate 2015 payments, information on these three items are needed:

Figure 1 shows a color-coded map of 2015 ARC-CO estimated payments for corn across the United States. Where irrigated and non-irrigated payments estimates exist, the irrigated ARC-CO payment estimated is shown in Figure 2. Counties left blank do not have a NASS yield estimates. Payments are given on a per base acre basis. As can be seen in Figure 1, many counties in the United States will receive 2015 payments. Payments of between $40 and $80 per base acre are common across the Midwest. However, there are lower payments and some counties will not receive a 2015 ARC-CO payment for corn. 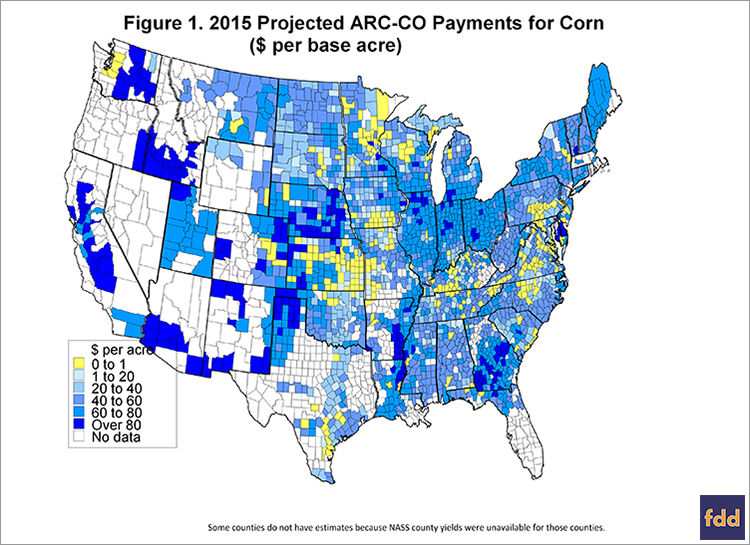 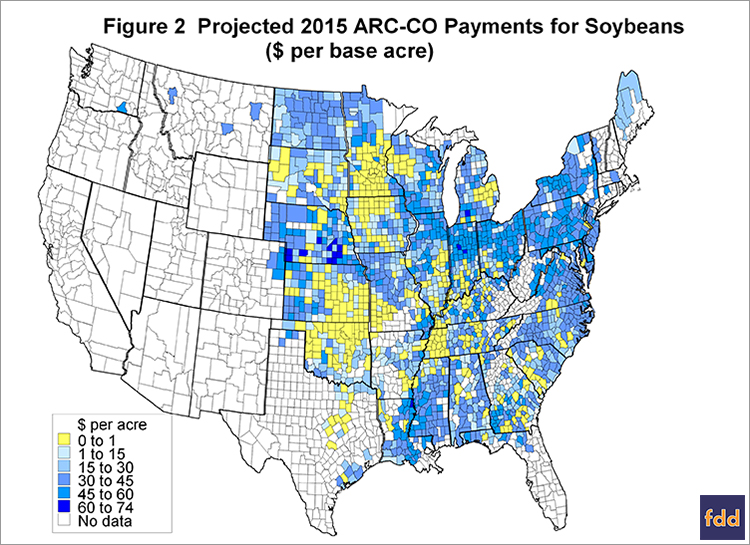 The above estimates use NASS yields in arriving at ARC-CO estimates. FSA will use their own estimates of yields. Most often, FSA yields will be lower than the NASS yields used in this article, resulting in payments that are equal to or higher than those shown here.

ARC-CO payments for 2015 will be a significant positive cash flow on many grain farms as net farm incomes are projected to be low in 2016 (farmdoc daily April 26, 2016). However, these payments will not completely offset the lower prices and the remaining, stubbornly high costs that contribute to negative cash flows. An urgent need to cut cash flows now and through 2017 will exist.